Fred VanVleet to New York Knicks rumors are heating up 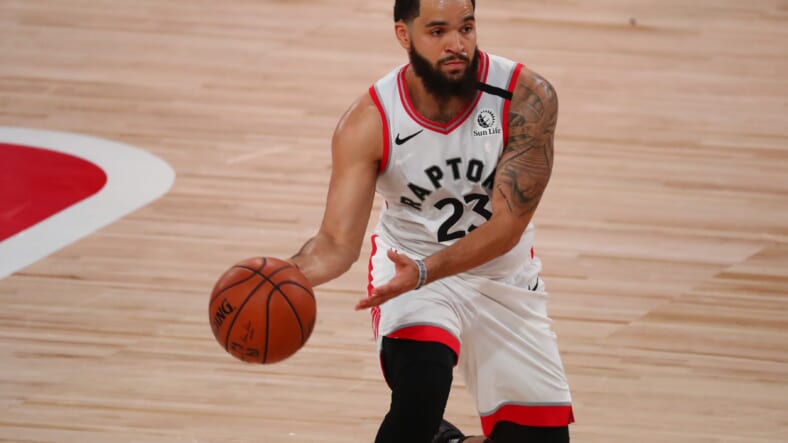 Aug 17, 2020; Orlando, Florida, USA; Toronto Raptors guard Fred VanVleet (23) passes the ball during the second half in game one of the first round of the 2020 NBA Playoffs against the Brooklyn Nets at AdventHealth Arena. Mandatory Credit: Kim Klement-USA TODAY Sports

There’s no question that the New York Knicks need an improved team composed of established veterans and rising youth, but drawing interest from quality players has been a struggle the past few years. While they did manage to land Marcus Morris and Julius Randle in free agency last year, they both failed to elevate the state of the franchise, as Morris was traded away, and Randle became more of a problem than a solution.

Incomes Leon Rose, the new general manager and head negotiator for the Knicks. His connections around the league with big-name players should prove to be helpful, but we’ve heard this story before with Phil Jackson. The hope is that Tom Thibodeau is the right coach for the job, and whatever players they do draw to the “The Mecca” fit into his system like a glove.

One free agent, the Knicks, are reportedly looking at this offseason is Fred VanVleet, who has been a menace for the Raptors.

According to Stefan Bondy of the NY Daily News:

The Raptors are the betting favorites to re-sign VanVleet, but his free agency is unrestricted and the Knicks, according to sources, are among the other teams with interest. If they donâ€™t pull the trigger on a Chris Paul trade, it certainly makes sense for the cap-loaded Knicks.

The Knicks have also been in talks with Oklahoma regarding a potential trade for Chris Paul, but his bloated contract and age don’t make him very appealing. The Knicks aren’t in a position to win now, so trading for a player making over $40 million per season isn’t a developmental move.
VanVleet is a better option, as the Knicks have the cash to splash, and he’s only 26 years old. Ultimately, the Raptor is a solid player to build around. He won’t be cheap, though.
ESPN’s Bobby Marks stated that VanVleet could be valued between $25-30 million per season:

â€œOne team told me last week that they think heâ€™s going to get between $25 million and $30 million per season,â€Â said Marks on The Brian Windhorst & The Hoop Collective Podcast.

Last year with Toronto, VanVleet averaged 17.6 points and hauled in 3.4 defensive rebounds per game. This was his best statistical season, and while his numbers don’t necessarily scream offensive efficiency, he’s a well-rounded player who does plenty of things at an above-average level. His action on the offensive side of the ball has only increased, and his efficiency from the floor has remained consistent, which only attests to his quality.

Fred is also a solid defender and passer, which should excite the Knicks. Far too often, the Knicks have signed one-way players that simply can’t hold up their value on both ends of the court. A player like VanVleet will do that, which is why the rumors are continuing to bubble.