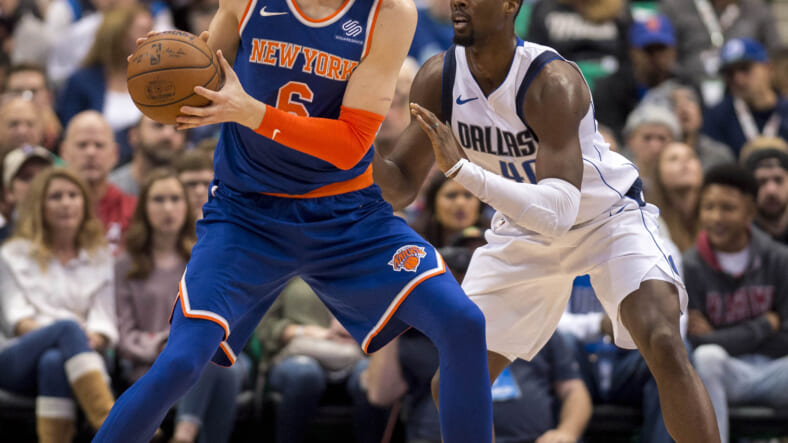 The New York Knicks are preparing to take on the Dallas Mavericks on Friday evening, and they will reunite with one of their old stars. Former Knick Kristaps Porzingis will lead the charge for Dallas, who currently sits at 25-21 and hosts Luka Doncic and another former Nick, Tim Hardaway Jr.

With Doncic averaging 28.7 points and Porzingis 20.4, the Knicks will have to be on top of their game to take down Dallas. They have won four of their last six games, with victories coming over the Boston Celtics and Oklahoma City Thunder in the last two.

Porzingis, though, misses his time in New York, making some heartfelt comments before his new team looks to overcome their stellar defense.

â€œI do,â€ Porzingis said. â€œI miss the city. I miss this place. A lot of great memories. Every time I come back, itâ€™s special. A lot of people here still recognize me and show me love and support. Itâ€™s always good to come back.â€

Porzingis tore his ACL in 2018, which changed his outlook with the Knicks forever. Heâ€™s currently averaging 20.4 points, 8.9 rebounds, and shooting .478% from the field. He made the transition to center, but his elite shooting abilities make him extremely valuable.

â€œTheyâ€™re good, theyâ€™re playing physical,â€ Porzingis said of the Knicks. â€œTheyâ€™re playing a little bit slower but they take their time and they have [a] good group. They play hard defensively. Very solid team. Theyâ€™re not a team we can overlook and think that weâ€™re going to come in there and beat them. Especially when theyâ€™re at home. So weâ€™re going to take them very seriously and prepare for them.â€

The Knicks have outperformed everybodyâ€™s expectations this year with suffocating defense. However, their offense falls off at times, and if teams can shut down Julius Randle and limit RJ Barrett, they can basically improve their chances of victory.

Porzingis also reflected on the idea of him staying with the Knicks years ago and what mightâ€™ve happened, an interesting narrative nonetheless.

â€œWho knows how we couldâ€™ve been if I didnâ€™t get hurt. Multiple different situations couldâ€™ve happened. But it is what it is. Now in Dallas, my second year in Dallas. I do have great memories of New York and I do miss the city, I miss the fans. I had a great time there when I was there.â€

Thankfully, the Knicks will have home-court advantage for this contest, and with Dallas ranking first in the southwest division, theyâ€™re going to need to be at the top of their game to take them down.

The Knicks are coming off a disappointing loss to the Minnesota Timberwolves, who are the worst team in the NBA. Interestingly, Dallas might be first in their division, but they only have a 3 game advantage over New York, who currently sits third in the Atlantic Division.