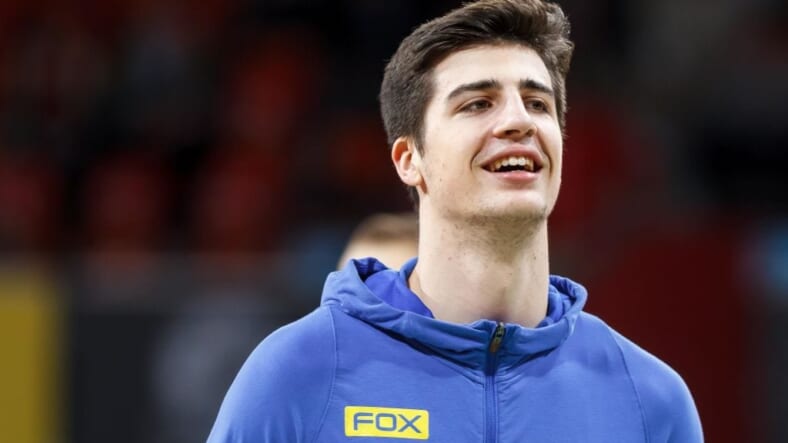 According to ESPNâ€™s latest mock draft, the New York Knicks will be selecting Deni Avdija, SF/PF, Maccabi Tel Aviv in the upcoming NBA draft.Â  Avdija, 19-years old, stands at 6’9″ and could have the skills for the modern game. However, do the Knicks take a chance on another â€œproject.â€

2 years ago the Knicks took a chance on another project, Kevin Knox with the 9th pick.Â  The Knicks knew that Knox was project going when selecting him.Â  This also came from Knoxâ€™s head coach at Kentucky, John Calipari.Â  Thereâ€™s still time for Knox to develop into what everyone hopes.Â  But that window is closing and fans are getting restless.

Avdija does have a lot of upside to his game.Â  Guruâ€™s looking at his game say that his basketball IQ and versatility is what makes him so appealing.Â  He can also play multiple positions and be a big time contributor on both ends of the floor.Â  He can also shoot, which is something the Knicks desperately need.Â  The Knicks can certainly use all of that, especially the basketball IQ and versatility parts.

However, the Knicks do need a consistent, everyday point guard.Â  But, you canâ€™t draft for need.Â  In todayâ€™s game, teams always have to draft the best player available.Â  This all depends on where the Knicks pick, of course.

The Knicks could get a point guard in a trade, the 2nd round or find an undrafted gem.Â  Rumors circulated about the possibility of trading for Chris Paul with his connection to Leon Rose.Â  They could also eye Fred Van Vleet in free agency but who knows what direction Rose wants to go.

ESPN does have the Knicks scooping up Dukeâ€™s Tre Jones in the 2nd round to compete for point guard minutes.Â  Could he be another Van Vleet?Â  Smaller point guards seem to be the hot thing these days.

Some may see Avdija as a project and some may think heâ€™s the right choice.Â  It all depends.Â  Either way Knicks fans will argue with whoever they pick.

Avdija could be the next foreign superstar behind the like of Luka Doncic and former Knick Kristaps Porzingis.Â  The game translates to the US differently.Â  Doncic and Porzingis are the exceptions. Not every foreign player is going to be a star, even enough some may think that.Â  The Knicks had their guy and traded him away.

Knicks fans can watch film on Avdija until their eyes bleed.Â  Some will want him and some will want nothing to do with him.Â  It all comes down to this new Leon Rose regime and what his scouts think is best for the New York Knicks.