Did the New York Knicks Land a Gem in UDFA Myles Powell? 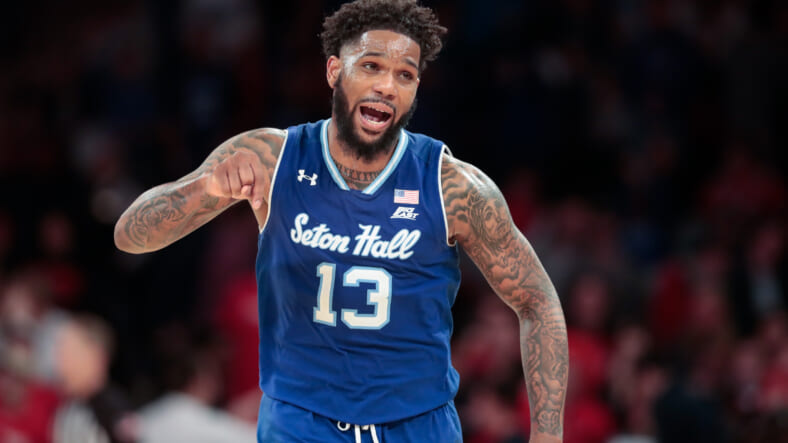 Shortly after the draft, the Knicks immediately got into contact with Seton Hall megastar Myles Powell. It was a shock to most college basketball fans to see the New Jersey native not get drafted in the 2nd round, at least. The Knicks were able to ink the ball-dominant guard in order to give him a shot at either a two-way contract or a spot on the Knicks. After letting go of Kenny Wooten, they freed up a two-way contract to offer the 4-year college prospect. The hype around Myles Powell is real, but is he someone who could really contribute to the Knicks? With his talent and mentality, he might just be the steal of the draft.

Elite Scorer At the Guard Position

The Knicks guard depth coming into the draft was weak, but with Myles Powell, Immanuel Quickley, and Alec Burkes, they have some additional depth to drive competition. In his 4-year collegiate career, Powell was able to average 17.5 PPG, 3.3 REB, and 2.3 AST on a 56.2% True Shooting % and 34.6% from beyond the arc. He’s a high usage scorer who, despite receiving double teams from opponents, is still able to score. He has a 1.8 Defensive Box Plus-Minus in college as well, making him a valuable two-way guard. I don’t see Myles starting on this roster, but he can be a sparkplug off of the bench. His competitive fire and underdog story will also have another effect on the Knicks.

Creating Healthy Competition on the Knicks

The New York Knicks have a few guards ahead of Myles on the depth chart, but that won’t stop him from battling. He’s going to want to get minutes, so if players on the team want to keep their jobs, they’re going to need to work. Healthy competition on a roster is always good for a team, and he’s going to bring it. Myles Powell has been counted out in college and in the draft. The Knicks are giving Myles Powell a chance, so he’s going to run with it. Players who aren’t impressing are going to need to step up, or else Powell will eclipse them. The young guys run the show now on the roster, so it’s open season for minutes.

What Can Myles Powell Do For The Knicks?

I think off the bench, given 20 minutes, he’s going to be able to be a good shooter who can spark the offense. The bench isn’t a strong suit, so the Knicks need to hope he and the bench can give them valuable points. I think the player comparison I have for Myles is Lou Williams, a bench player who gets on the court and makes a heavy offensive presence. I don’t think Myles will be some MVP, but the Knicks got a good one in him. Offense is rampant in modern-day basketball, and Myles is exactly what you want out of a 6th man in the NBA. His defensive potential is also there, and we could be seeing a fairytale in the making.