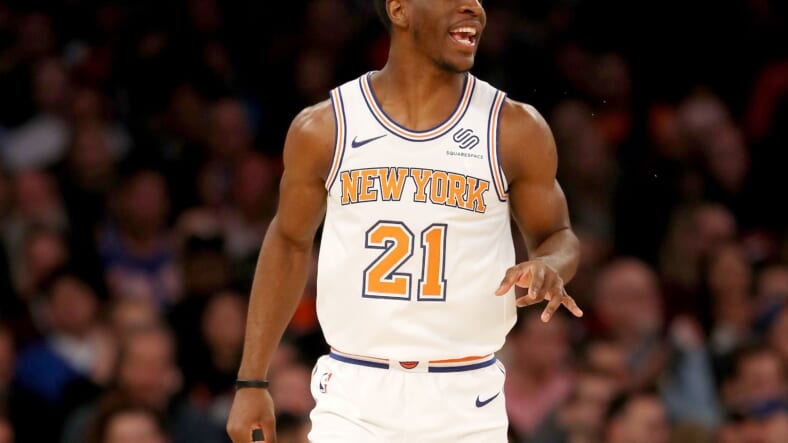 NEW YORK, NEW YORK - JANUARY 02: Damyean Dotson #21 of the New York Knicks reacts after he got the assist in the first half against the San Antonio Spurs at Madison Square Garden on January 02, 2018 in New York City. NOTE TO USER: User expressly acknowledges and agrees that, by downloading and or using this photograph, User is consenting to the terms and conditions of the Getty Images License Agreement. (Photo by Elsa/Getty Images)

Damyean Dotson is still trying to earn a spot in the Knicks rotation. Â Ever since Kevin Knox went down with an ankle injury, Dot has has been making the most of his time. Â In his first three games of the season, Dotson is averaging 14.7 points, 6.7 rebounds and 1.7 steals in 29.3 minutes of action, while shooting .486% from the floor.

This is the beginning of the Dot that Knicks fans hoped for when drafted out of Houston. Â Dotson has â€˜the stuffâ€™ to be a beast shooting guard, he just needs consistent playing time. Â Dotson is 6â€™6â€ with a 6â€™9â€ wingspan and 38â€ vertical. Â He can play both shooting guard and small forward, plus heâ€™s still growing. Dot has the work ethic as well, as he showcase his growth on social media this past offseason.

Last season, we saw a very small sample of what Dotson could bring to the team when offered consistent minutes. Â However, when he began to get those minutes, it was at the end of the season, but he did pour in 30 points against Miami at the Garden. Â He is starting to become more confident in his shoot as well. Â Ever since his first appearance this season against the Nets, where he put up 8 shots, Dotâ€™s confidence has risen. Â His attempts per game rose to 13 against the Celtics and then 14 vs. the Heat yesterday.

His best performance of the season, thus far, was against the Heat as well. Â Dotâ€™s stat line was beautiful,Â 20 points (8-14),Â 10 rebounds,Â 2 assists,Â 1 steal andÂ 1 hell of a block. Â Fiz said before the Heat game that he was poking to switch up the starting lineup and with his play, Dotson is making a strong case to be put into the starting lineup.

Coach Fizdale even said that Dot â€œcan really shoot it.â€ Â Well, he needs time to do that. The one troubling part about this is that Ron Baker is still playing over Dotson, except against Miami. Â Baker brings nothing offensively to the Knicks. Â He is a hustler, who loves to dive on the floor, get hurt and thatâ€™s about it. Â Dotson can stretch the floor and has proven he can score and rebound. Â He also brings good length to the defensive side of the ball which shows with him averaging 1.7 steals a game.

His production might slow down once Knox returns, but if Dotson is able to continue gaining confidence in his shot, providing strong defense, rebounding and steals, thereâ€™s no doubt that he earns a spot in the rotation. Â Fiz likes to feed the hot hand and currently Dot is hot on both sides of the court.