Can Knicks’ Jericho Sims sneak his way onto the roster for the 2021-22 season? 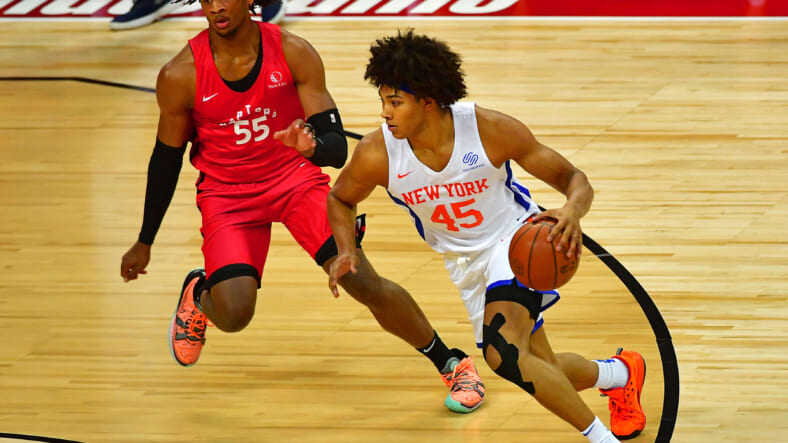 With expectations being blown out of the water, the Knicks have a few difficult decisions to make, and one of them lands with Jericho, who offered incredible athleticism and physicality in the paint.

At 6″10′ and 245-pounds, Sims averaged 9.2 points, 7.2 rebounds, and 1.1 blocks last season with Texas in the Big 12. Averaging 24.5 minutes per game, he connected on 70% of his shots from the field and 52% from the free-throw line. While there are some categories he needs to improve upon, he averaged 28 minutes per game during Summer League play, contributing 8.2 points on 81% shooting from the field. He also offered 8.2 rebounds per contest and one block per game.

Jericho Sims does not seem like a fun matchup for opposing defenses pic.twitter.com/FgEl7aVf5t

Sims is a long shot to make the active roster, given the existence of Mitchell Robinson, Nerlens Noel, and Taj Gibson. The Knicks are extremely confident that Robinson will make a full recovery from a fractured foot he suffered last season, and retained Noel on a three-year contract. Gibson also completed a two-year, $10.1 million extension with New York at 36 years old.

How can Jericho Sims make an impact with the Knicks?

Sims will have to fight tooth and nail to earn minutes, but the probability is he will land in the G League where he can continue developing and offer value when called upon. The Knicks considered pushing him to a forward spot, but with adequate depth, Sims doesnâ€™t seem like a likely fit. He will offer situational play and youth if need be, especially if injuries begin to arise at the center position.

Jerichoâ€™s athleticism around the rim and ability to catch lobs off the pick-and-roll stands out. Sims should focus heavily on his defense, as that is the best way to get in the good graces of head coach Tom Thibodeau. Increasing his timing on block attempts and guarding the perimeter will make him an even more valuable piece moving forward.

The front office did sign Sims to a two-way contract, with the terms of the deal disclosed. However, if he can continue to grow and harness his capabilities, the Knicks could view him as an integral piece after the 2022-23 season. With Noelâ€™s contract essentially a two-year deal and Gibson a one-year deal with no dead money next season, there is potential for him to be elevated after his rookie campaign.

The Knick set themselves up quite nicely for the future, and the emergence of Sims likely has them grinning at their financial decisions. Of course, impressing during the Summer League is exciting, but until he can provide that same effectiveness during live action in a regular-season game, it is all just hype.