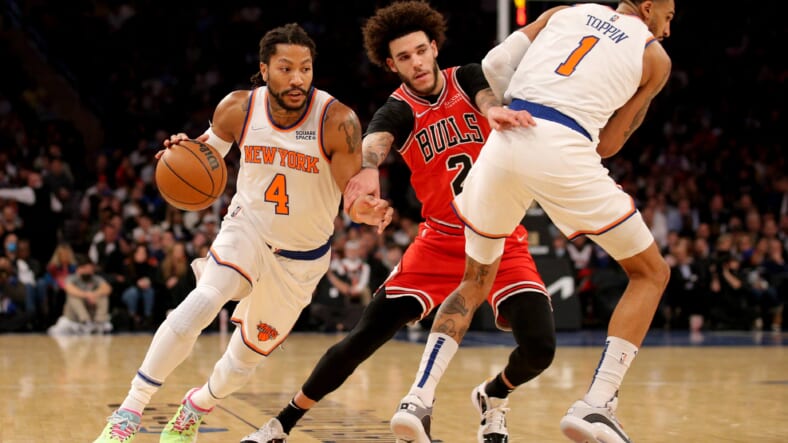 The New York Knicks faced off against the Chicago Bulls in a shootout on Thursday night, with the final score 119-115. Despite a resilient effort, the Knicks deserved to lose this game, finding themselves down 21 points in the first half before mounting an incredible comeback in the third quarter. Unfortunately, New York was unable to extract a victory, losing their second consecutive contest by four points or less.

The Knicks took a late lead for just a moment before DeMar DeRozan hit a number of shots to give the Bulls an advantage. In fact, DeRozan finished with 34 points, hitting 12-of-19 shots from the field and 10-of-11 free throws. He also contributed six rebounds and three assists.

The Knicks found their groove in the second half partly because they began to understand Chicago’s game. With smaller players, the Knicks played physically and dominated the interior, as Julius Randle posted 30, hitting 14-of-21 shots from the field and picking up 12 rebounds.

The starting team as a whole played well for New York in the 2nd half, with Alec Burks contributing 16 points over 43 minutes and Evan Fournier posting 16, shooting 40% from three-point range. Fournier also earned four steals in the game, a high for both teams.

Off the bench, Obi Toppin scored eight points, recording two steals and four rebounds. While he allowed a few costly turnovers, he played with energy and made several defensive stops to keep the Knicks in the game.

Unfortunately, the difference in this game was the turnovers, as the Knicks posted 18, eight of which came in the first quarter. They managed to fight back in the second half, with Chicago turing the ball over 15 times.

Despite another resilient effort, New York will go home tonight with a somber feeling, exerting maximum effort but unable to secure victory. They will look forward to the Denver Nuggets, who should offer a better opportunity at victory compared to Brooklyn or Chicago. Their next game is on Saturday afternoon at 1 PM, so they have a bit of time to rest up before then.