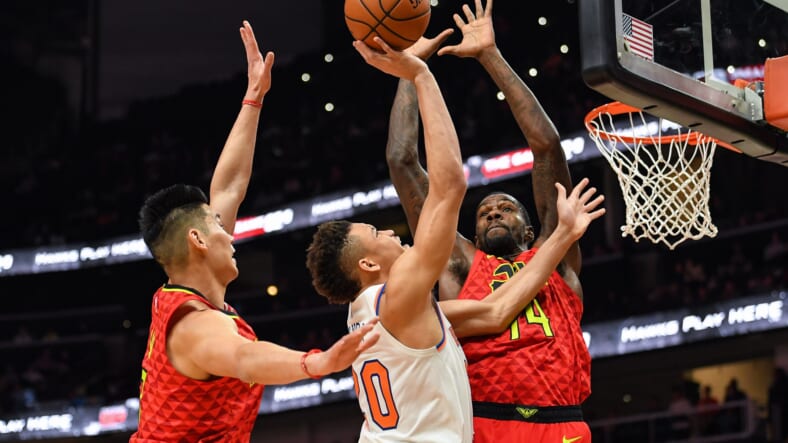 Two youngsters and a New York Knicks legend were at a PUMA Monday night event.Â  The event was for Walt Frazier’s new PUMA shoe.Â  Along with Frazier, second-year man Kevin Knox and the 3rd overall pick, RJ Barrett.

Frazier’s new shoe was not only the biggest topic of conversation for the evening.Â  Knox and Barrett answered questions about the current state of the Knicks and outlook for the upcoming season.

Knox went onto say that practices have a “whole new tenacity” and they are fierce.Â  He continued to say that this team is “different” and the players are “hungry.”Â  There was a feeling already that they Knicks are bringing a different culture this season.Â  Players have been vocal with how they interpret this team.

Bobby Portis and other Knicks said this team as a bunch of “dogs” and they are ready to “shock” people.Â  It seems that Knox is another one to add to that group.

However, the biggest take away from that article was Knox saying the team is “bonding.”Â  If you want to build a winning product the team has to be close.Â  Knox and several other teammates attended the Jets-Browns game last night and we all saw the ‘family lunch-in’ photo and players working out together.

The practices have been competitive and players have gotten better, according to Knox.Â  Case-in-point, Frank Ntilikina and his fine play that he displayed throughout the FIBA World Cup.Â  The Knicks talk trash, play hard, but are still a family and smile after all the battles in practices, according to Knox.

It is a good start for the Knicks this season and this is the stuff you definitely want to hear.Â  However, fans will want to see all of this talk on the court this season.Â  Love the optimism, but show us through the teams play.