Are changes coming as Knicks prepare to take on San Antonio Spurs? 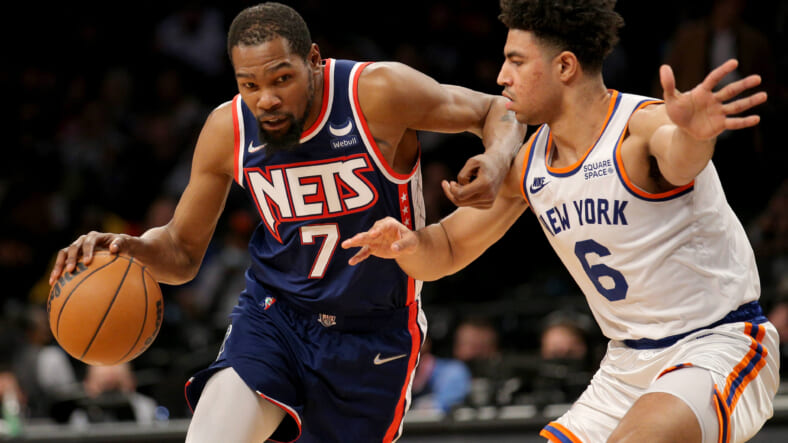 The New York Knicks are coming off a three-game losing streak as they prepare to face off against the San Antonio Spurs on Tuesday night. The Spurs, on the other hand, have won four consecutive games, most recently against the Golden State Warriors, taking down Seth Curry and his 27 point performance.

However, the Spurs’ starting unit was dominant, as Dejounte Murray posted 23 points and Derrick White logged 25. However, San Antonio has a few solid bench pieces, including Lonnie Walker, who posted 21 points in the win, and Bryn Forbes.

The Knicks will be looking to stifle their winning streak in San Antonio, but they could be preparing to make a few changes with distributing minutes and player combinations.

â€œIf weâ€™re not performing well, look, there may be more changes coming,â€ Tom Thibodeau said over the weekend.

Thibodeau has already benched Kemba Walker for his lackluster defense, but it is possible they start to decrease the minutes of Evan Fournier, who’s provided nothing short of lackluster defense and poor positioning. His shot-making abilities and inconsistent shooting have plagued the Knicks and their attempt to hold leads in recent days, which could suggest a minor shift in defensive strategy.

Ultimately, the Knicks need better perimeter defense and efficient communication, something that has been lacking recently. Effort has also been a catalyst for the team’s struggles, which has been noted by multiple starters, including Julius Randle and RJ Barrett.

One player who could earn more time on the floor is rookie Quentin Grimes, who has provided phenomenal defense in recent days. Against the Denver Nuggets, he was one of only two players to record a positive +/-. Grimes has slowly been earning more time on the floor, posting 12 against Denver and six against the Chicago Bulls, an increase from three minutes against Brooklyn.

With Reggie Bullock taking his talents to Dallas, the Knicks need more 3-and-D players — it seems they made a poor decision investing in Fournier to try and out-score opponents (it disrupted the identity of the Knicks). Grimes can post up in the corner and offer an outlet option but also provide on-ball defending that makes life hectic for the opposing ballhandler. Pairing him with Immanuel Quickley on the floor might be a good move.

However, San Antonio utilizes two small forwards and a center, putting in work in the paint, which is the Knicks’ strong suit. White and Murray both make up the majority of the Spurs’ three-point shooting, so having Quickley and Grimes mark them could be beneficial for the defensive efforts.

Nonetheless, more effort and better communication are the keys for the Knicks moving forward, but the moment they find themselves in a deficit, they begin to implode with poor shot selections and lack of discipline.