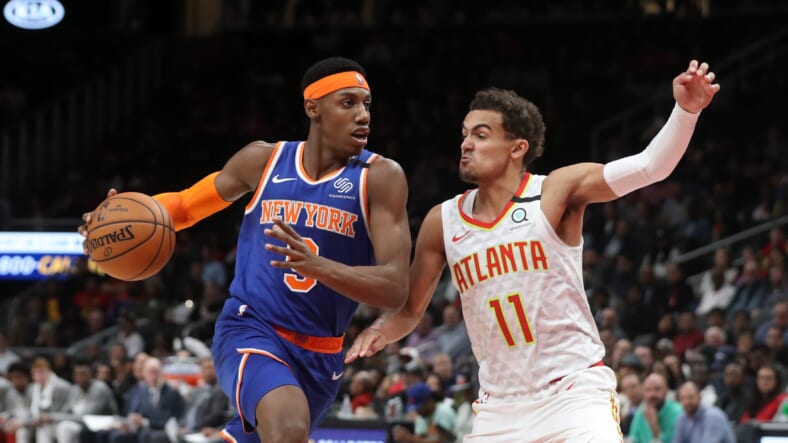 One day after being embarrassed by the Phoenix Suns, the New York Knicks are back at it against the Atlanta Hawks down south. The Suns completely demolished New York at home, with Devin Booker posting 32 points and every single starter hitting double digits thanks to poor defensive play by the Knicks.

With the starters struggling to play cohesive basketball and produce offensively, the team is in shambles trying to pick up the pieces. Atlanta presents a formidable challenge, given they are on a seven-game winning streak after losing six games consecutively before turning their season around completely.

During this recent stretch of success, Atlanta has scored 110+ points in every single game, finishing with 132 against the Memphis Grizzlies in their most recent victory.

Three keys for the Knicks to take down Atlanta:

One way or another, the Knicks have to find a way to limit Trae Young, who is one of the best point guards in basketball. Heâ€™s averaging 25.6 points per game, 9.2 assists, and 3.6 rebounds over 33.5 minutes. Heâ€™s averaging nearly 10 points more than the team’s second-leading scorer, John Collins.

Young is hitting on nearly 39% of his three-point attempts this year and 46.5% from the field, showcasing incredible efficiency at a high clip. If New York can utilize some of their press defenders on Young, like Immanuel Quickley, Quentin Grimes, and potentially even Miles McBride, they may have a bit more success defending him.

The Knicks have lacked energy this season at times, as multiple players have indicated theyâ€™ve been outpaced. Against the Suns, they weren’t just out-hustled, they were completely outmatched. Head coach Tom Thibodeau stated after the game that their energy simply wasnâ€™t where it normally is, which has been a reoccurring issue this year.

â€œI didnâ€™t think our energy was where it normally is,â€ Thibodeau said. â€œYou got to keep your edge. Overall we didnâ€™t play well. Itâ€™s on all of us. Itâ€™s not on one particular person.â€

If the Knicks donâ€™t come out guns-blazing and showing sufficient energy, Atlanta will take advantage with ease.

One of the primary reasons Atlanta pushed past the Knicks in the first round of the playoffs last season was due to their physicality inside. Having Collins and Clint Capela dominating in the paint certainly poses a significant challenge for New York.

Luckily, they will have Mitchell Robinson back to help assist in that category, as he was missing in the postseason last year. Robinson is having a solid campaign thus far, averaging 7.1 points, 1.6 blocks, and 7.6 rebounds. They will need him to be at the top of his game, especially against Young and his elite floater.