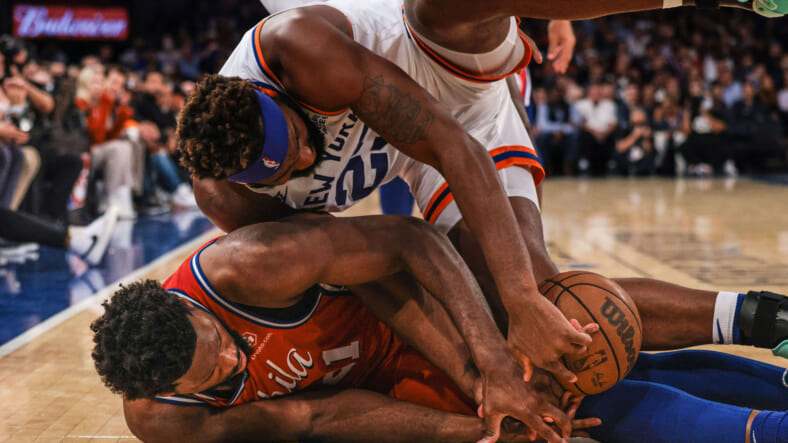 The New York Knicks are coming off an incredibly disappointing performance against the Cleveland Cavaliers on Sunday evening, but they will look to bounce back against the Philadephia 76ers on Monday.

The 76ers are currently on a four-game home winning streak, emerging victorious in their last six games straight. Philly is coming off a solid win over the Chicago Bulls, who have proved to be a good team early in the season — Joel Embiid finished with 30 points, shooting 11-of-19 from the field.

The Knicks will have their hands full, especially after a tough loss to Cleveland, but they have the talent to beat the 76ers for the second time this season.

Three keys for the Knicks to take down Philly:

1.) Limit Joel Embiid at all costs

If the Knicks want to bounce back after Sunday’s defeat, stopping Joel Embiid is a good place to start. Embiid is coming off a 30-point performance, averaging 21.4 points, 4.0 assists, 9.4 rebounds, and shooting 43.5% from the field this season. Heâ€™s also hitting a career-high 39.4% from range, showcasing his development as a sharpshooter.

Philadelphia shot 50% from deep against the Bulls in the last win, so limiting them in that category will be essential, but it boils down to restricting Embiid. The veteran center indicated he lacked intensity and effort in the loss to the Knicks several days ago, so we should expect an elevated game on Monday night from the 27-year-old.

The Knicks have been extremely poor guarding the perimeter over the last four games, allowing a 40.95% success rate from three-point land. Against the Cavaliers on Sunday, they allowed 54.3%, thanks to Ricky Rubio hitting 8-of-9 shots. The Knicks simply canâ€™t match that type of efficiency, especially from teams that rank in the bottom half of the league in three-point percentage. Philadelphia, though, is the No.1 ranked three-point shooting team at 39.4%, so the Knicks should anticipate that being a big part of their game.

Guarding the perimeter is a necessity, but Philadelphia also has the talent to beat them inside, producing an interesting defensive game for New York.

The Knicks ranked 2nd in three-point shooting just a few days ago, but theyâ€™ve dropped all the way to fifth at 36.9%. Against Cleveland, they shot just 29%, as theyâ€™ve experienced a bit of a cold streak from beyond the arc.

To beat a team like Philadelphia, they must match them in 3-PT percentage, so they will need great performances from Julius Randle, Evan Fournier, and RJ Barrett, who missed all six of his attempts from deep on Sunday.

The Knicks have identified themselves as a team that lives and dies by the three-pointer on both sides of the ball, which simply isnâ€™t a winning strategy in the NBA.