Would a shortened preseason hurt the New York Jets? 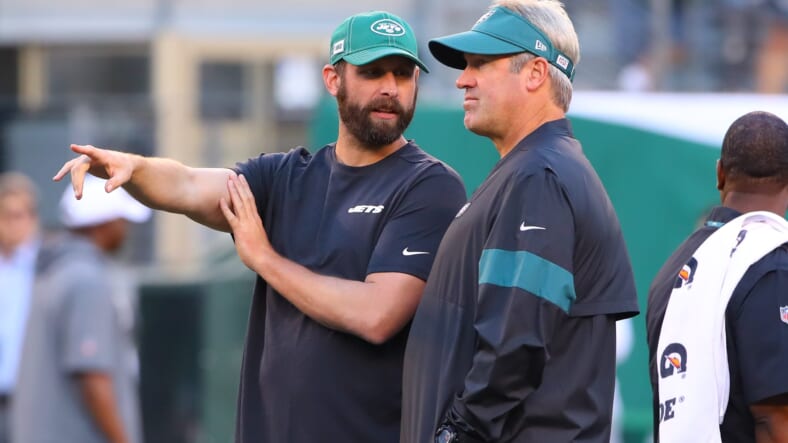 Shortening the NFL preseason has been discussed, even before COVID-19, but an exhibition quartet might help the 2020 New York Jets.

As COVID-19 stubbornly refuses to depart, professional American sports are attempting to inch their way back in. The powers that be at Major League Baseball finally agreed to a 60-game season that might never happen, while the NBA, NHL, WNBA, and MLS are all set to attempt “bubble” settings to either resume to start their respective 2020 campaigns. NASCAR and the PGA Tour, among others, have been able to operate in reduced settings, if only for their natural ability to adhere to social distancing.

Then there’s the National Football League.

The NFL has acknowledged the ongoing health crisis, though one look at their calendar hints that they’re at least trying to operate with some sort of semblance of business as usual. Minicamp proceedings have been shut down, but the annual draft lived on in virtual settings and players have met on their own to work out. Quarterback Sam Darnold is among them, having joined rival quarterbacks in California and his New York Jets offensive teammates in Florida as the league’s constituents bide their time before team facilities can officially open for gridiron business.

Reality perhaps finally hit the NFL on Thursday morning. The league announced that August’s annual Pro Football Football Hall of Fame Game would not be played, canceling the season’s first unofficial game. Accompanying induction ceremonies have been postponed to 2021.

While some see the game’s cancellation as merely a precaution, ensuring that the game’s combatants from Dallas and Pittsburgh wouldn’t have to report to training camp any earlier than they had to. But other observers see it as the first football domino to fall to the hand of COVID-19, with the preseason schedule seen as next in line.

Even in the best of times, the NFL preseason is often seen as athletic drivel, a mere excuse for the league’s 32 teams to charge full ticket, parking, and concession prices for what basically amounts to future practice squad/XFL participants going at it. While it does serve a purpose…allowing new teammates to develop chemistry, help new coaches create a rhythm…trimming the current standard quartet has been discussed for several years. COVID-19 could finally make that a perhaps overdue reality, finishing what the 2018-19 Los Angeles Rams started. Back then, L.A. boss Sean McVay sat his starters for the summer before embarking on a run to the Super Bowl.

But would such a long-overdue idea come back to haunt the New York Jets?

The preseason was made for teams like the 2020 Jets. To put the New York turnover into perspective, the only listed receiver leftover from a roster as recent as 2018 (Darnold’s rookie season) is Quincy Enunwa…and he’ll more likely than not never play another down in a Jets uniform. If Brian Winters leaves before Week 1, then Darnold’s offensive line will have (rightfully so) completely turned over by the time his third year begins.

New York is in a spot where they have a quarterback on their roster that they envision to be their starter in 3-5 years. It sounds like a basic requirement of NFL membership, but that just goes to show how traumatic the last decade was for the Jets. As another famous young New Yorker once learned, however, with great power comes great responsibility. Work must be done to develop some chemistry within the group, and the preseason offers four consequence-free opportunities to do that against another NFL opponent.

Offensive chemistry isn’t the only area that could’ve used a tune-up quartet. Starters and depth options alike can use some work on defense, especially with a plethora of new talent auditioning on one-year deals. If Jamal Adams is gone, that could eliminate rep opportunities for, say, Ashtyn Davis. Those returning from injury, like linebacker C.J. Mosley would lose an opportunity to get back into the swing of things. Even on special teams, that Jets have competitions that need solving, particularly in discovering who their primary returner will be and who will win the Sam Ficken/Brett Maher boot battle.

Even in “normal” times, Jets head coach Adam Gase was against the idea of slicing the summer slate.

“I like the fact that it gives a chance to evaluate,â€ Gase remarked last summer, per Manish Mehta of the New York Daily News. â€œThat fourth preseason game, all those guys that get to play, we get value out of that. Weâ€™re not trying to see if we can shorten the game up. Weâ€™ll probably try to throw it like 60 times.â€

True to Gase’s word, the Jets indeed aired out in their yearly preseason finale against the Philadelphia Eagles. Darnold didn’t play, but Trevor Siemian, Luke Falk, and Davis Webb united for 46 throws in a 6-0 win. One year prior, in Gase’s final Miami adventure, Brock Osweiler and current Jets backup candidate David Fales threw 45 in the preseason closer in Atlanta.

Gase even outlined why a McVay-like approach to the preseason wouldn’t work in East Rutherford.

“Last year, I remember having a conversation with [McVay] about his starters not playing and they had an older team,â€ Gase remarked in Mehta’s report. â€œThey had a lot of guys that had played a lot of football. Thatâ€™s kind of how they went about it. We have a young team and this is our first year in the program, so we need to play a little bit.â€

There are obviously merits to chopping down on the preseason slate, especially in a year where factors beyond football are making their prescience felt. An endless list of costly preseason injuries (Michael Vick in 2003, Osi Umenyiora in 2008, just to name two) is just yet another reason to move from the concept. The NFL themselves would probably love to see a preseason reduction if only because it be a solid stepping stone toward their long-sought-after goal of a regular-season beyond 16 games.

The time will come when the Jets are ready to outgrow the preseason, when they’re comfortable enough with themselves that they don’t have to rely on meaningless summer action to feel hopeful. But they’re not at that point yet, and those opportunities and chances to experiment and develop could be disappearing at the worst possible time, even if their absence comes for the most understandable reasons.