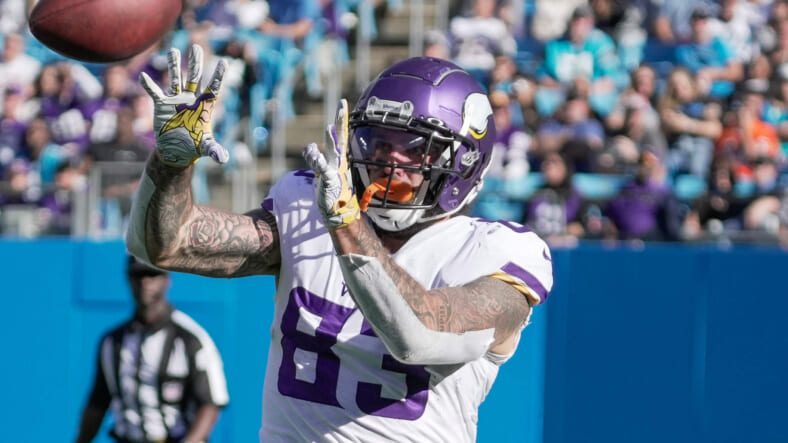 Since Dustin Keller, the New York Jets have lacked a solid, just even a reliable, pass-catching tight end. With Zach Wilson still being such a young quarterback and looking to ultimately prove himself as the franchise guy, the Jets need some sort of consistency from a bigger target over the middle.

This offseason, general manager Joe Douglas did a terrific job addressing the position. Adding Tyler Conklin, CJ Uzomah, and Jeremy Ruckert even exceeded probably the loftiest of expectations. For 2022, one in particular, Conklin, really seems poised to give the Jets some great production.

Last year was the first time Conklin had a featured role in the passing game, and he proved himself well. Throughout his first three NFL seasons, Conklin was targeted just 43 times. In 2021, Conklin saw 87 passes come his way.

He finished last year with 61 catches, 593 yards, and three touchdowns. Per PFF, Conklin only dropped one catchable pass in 2021.

With his breakout after finally being a featured role in the passing game and just turning 27 years old, the chances seem likely that Conklin produces even more going forward.

The New York Jets have been pleased with Conklin:

His training camp has been a good one that has generated some buzz. Even internally, reports have surfaced that the Jets themselves have been impressed with Conklin.

The connection between Conklin and his new quarterback has been documented throughout camp. Over the last two days, both Wilson and Conklin have been made available to the media. They were each asked about their instant rapport.

On Tuesday, Zach Wilson stated encouraging things about his new tight end, “We’ve had great feel” and “he’s a talented guy, and so I’m excited to work with him this year. He does a lot of really good things, so I’m excited to see how that can keep progressing.”

Yesterday, when Conklin was made available to meet with reporters, he was, of course asked about Wilson. He has discussed the talent level of Wilson on numerous occasions. On their development together within the offense, Conklin had this to say, “As we keep getting more comfortable with the offense together and how he wants stuff ran and how I run stuff, I think every day we kind of get just a little bit more on the same page.”

The dynamic between these two will play an obvious part in the growth of both players moving forward.

With Conklin, the top few traits of his that he will provide the Jets with are toughness, route running, strong hands, as well as run and pass blocking. As mentioned above, he just recently turned 27 years old. The Jets signed Conklin to a three-year contract. With more opportunities in the passing game, Conklin should keep getting better as a receiver. He has the chance to give the Jets something they have not had in quite some time at tight end.