What are realistic expectations for the 2021 New York Jets? 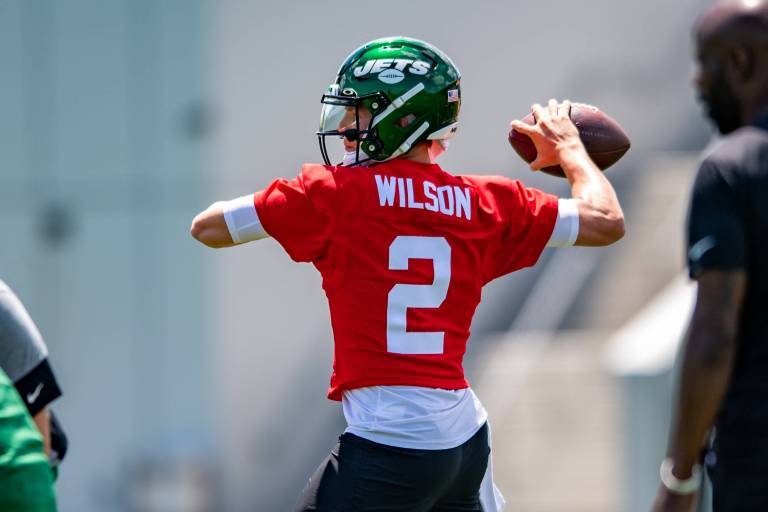 The New York Jets undoubtedly became a better team over the past eight months. But are they a playoff team? ESM’s experts discuss.

The 2020 New York Jets left the franchise’s immediate and long-term future in a rare state of optimistically macabre: after the Jets sunk to the depths of the football underworld…plummeting to dubious valleys that even the cursed Rich Kotite era managed to avoid…any move the team made in the offseason could’ve been seen as an improvement.

With both the Stanley Cup and Larry O’Brien Trophy…not to mention every medal at the Olympic Games in Tokyo…earned and bestowed, it’s officially socially acceptable to start forecasting the 2021 NFL season. The metropolitan arrivals of so many elite new faces, of both the rookie (Zach Wilson, Alijah Vera-Tucker, Elijah Moore) and veteran (Carl Lawson, Corey Davis) variety have gotten fans excited, as has the hiring of head coach Robert Saleh.

But the ultimate question lingers: after a two-win season and now ensnared in the NFL’s longest active playoff, just how much improvement will the Jets show in the one place it matters…the standings, namely the win column?

To take a page out of another New York sports decisionmaker Brian Cashman, let’s view Joe Douglas’ New York Jets from the perspective of the Death Star.

Ignoring the fact that the Star Wars-based superweapon is destroyed in each of its incarnations, Douglas does have a Death Star at his disposal. But it’s not the behemoth seen in A New Hope (and, by extension, Rogue One), nor is it the partially constructed but “fully armed and operational battle station” from Return of the Jedi. Rather, the Jets’ Death Star resembles the infantile version Vader and Palpatine look over at the end of Revenge of the Sith.

The Jets began this offseason with the hiring of head coach Saleh. In contrast to the Adam Gase hire, a transaction praised exclusively by modern hot take artists, the Saleh move was lauded by on-field participants both domestically and abroad. New York was and is by no means a football destination yet…one needs to establish a victorious on-field prescience before they become that…but the Jets were able to attract several names with championship experience, winners that were attracted to what Saleh was trying to build.

Douglas and Co. could’ve stood pat on the pass rush, a rare 2020 silver lining after the breakouts of Quinnen Williams, Foley Fatukasi, and John Franklin-Myers. They instead bolstered the unit by bringing in rising pressure artist Lawson and NFC postseason staples Sheldon Rankins and Vinny Curry. Elsewhere on defense, they prepared for Saleh’s reimplementation of the 4-3 with the arrival of linebacker Jarrad Davis, whose finest defensive days came in Florida and Detroit’s similar formations.

The AFC East already appears to be under the control of a new potential dynasty in Western New York, so capturing the quartet for the first time since 2002 appears to be out of the question. The North could well send three teams to the postseason, while the West’s mighty Kansas City Chiefs show no signs of slowing down, even with the Los Angeles Chargers rising fast with Justin Herbert. Even with an extra playoff spot, it’s asking a lot for the Jets to establish themselves in the crowded conference.

Even if the AFC wasn’t packed to the brim with contenders, the Jets aren’t fully completed just yet. There were so many holes so fill, so much damage to repair from the Gase era that it was a guarantee that some area of the roster was going to be neglected. One look at the current depth chart shows that the secondary got the raw deal, as inexperienced options like Bless Austin, Ashtyn Davis, and Bryce Hall are set to assume primary roles. On offense, there are plenty of players that can become major contributors (Carter, Moore, Davis), but they lack the experience in the primetime situations they’ve been called upon.

Until Saleh’s group proves otherwise on the field, their dire straits are more indicative of just how poorly the Gase era went. Gase might be gone, but the dark spirits of his tenure will linger over the Jets’ facilities until the fruits of Saleh’s process appear in the win column. A good season in 2021 would be to at least double the two-win tally from last season and perhaps earn an upset win over an elite opponent, a similar process to what the Chargers went through last year with Herbert.

The New York Jets have a lot of hype leading into the season and for good reason: rookies Wilson and Moore highlight a revamped offense. Lawson adds a much-needed pass rush to a defense that needs it with unproven corners.

The Jets, however, are not a playoff team just yet. Aside from their own play, they find themselves in an increasingly brutal AFC East. Each team is improving, but, at the moment, Gang Green finds themselves behind Buffalo and, most likely, either New England or Miami…maybe even both.

Yes, the future is bright and fans should be excited. All of the excitement should be taken with a grain of salt, though. There need to be reasonable expectations for this season. So, realistically, look for this team to win about 6 games of the newly-implemented 17 game schedule.

As the Jets head into a season filled with promise, I want to make one thing clear before I begin: I do NOT expect the New York Jets to make the playoffs.

I expect the team to take a significant step up and approach the 7-9 win territory. With that said, I foresee hiccups along the way: Wilson will likely experience significant growing pains early as he leaves Brigham Young University and acclimates to the bright lights of Broadway. I firmly expect struggles from both sides of the ball early as they look to establish a new identity under a new coaching staff. Lastly, I have a bad feeling about the secondary, but guys like Hall and Michael Carter II will likely get better as the season progresses.

On a lighter note, I foresee a strong debut in green and white for Lawson, Rankins, and Davis. Lawson is a legitimate threat to finish in the top ten in sacks, while Rankins and Davis will likely be impact contributors if they can stay healthy. Finally, look for rookies, Michael Carter (the running back) and Alijah Vera-Tucker to make names for themselves early, although the story will be Moore, the budding star receiver.

3 starting pitchers the Yankees could pursue this off-season
wpDiscuz