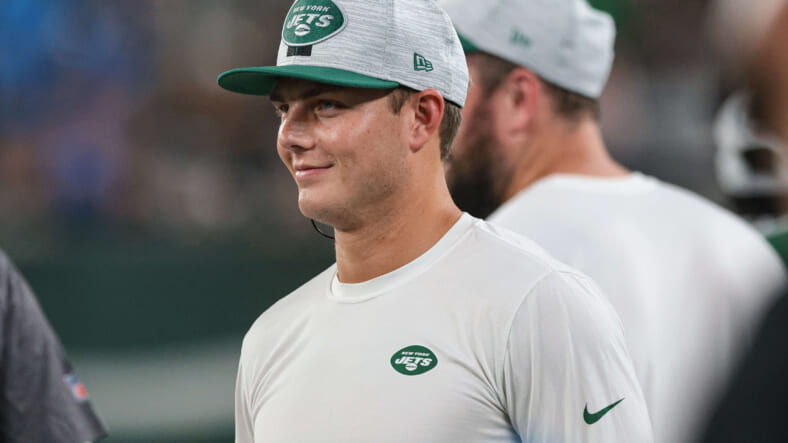 One down, hopefully many, many, many more to go, New York Jets fans hope.

Zach Wilson found Corey Davis for his first career NFL touchdown during the late stages of the third quarter in the Jets’ Week 1 contest against the Carolina Panthers on Sunday. A Wilson rollout afforded a 23-yard lob to a wide-open Corey Davis, who earned six points as a member of the Jets for the first time. Wilson wound up adding all eight points on the Jets’ possession: a quarterback draw capped off the drive, slicing Carolina’s 16-point lead in half.

The drive at the end of the third quarter allowed Wilson and the Jets to create some offensive traction: after struggling in the first quarter, he converted all four of his attempts on the drive, totaling 57 of the Jets’ 70 yards en route to his first New York score.

Alas, the play, true to Jets fashion, was not without heartbreak. Mekhi Becton was injured on the play and required assistance to leave the field. Becton, who was later transported to the Jets locker room on a medical cart, was labeled doubtful to return.

The Jets continue to trail the Panthers 16-8 in the middle stages of the fourth quarter.