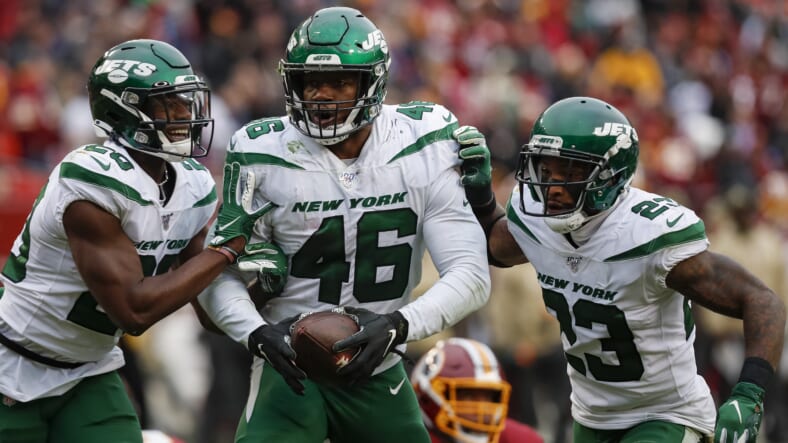 LANDOVER, MD - NOVEMBER 17: Neville Hewitt #46 of the New York Jets celebrates with Marcus Maye #20 and Arthur Maulet #23 after intercepting a pass against the Washington Redskins during the second half at FedExField on November 17, 2019 in Landover, Maryland. (Photo by Scott Taetsch/Getty Images)

The New York Jets have been leaving the Adam Gase/Gregg Williams era behind, but these defensive staples might be worth keeping around.Â

The New York Jets have taken spring cleaning to a new level this offseason.

A purge of the Adam Gase era unofficially began during his ill-fated second season, when a de facto fire sale ended the green careers of Le’Veon Bell, Avery Williamson, and future Super Bowl champion Steve McLendon. Gase himself was let go after an unceremonious 32 games, taking almost all of his coaching staff with him. Several big names from the era were likewise sent elsewhere, the further departures headlined by the trade of franchise quarterback Sam Darnold to Carolina. Linebacker Jordan Jenkins, the longest-tenured member of the team, absconded for Houston via free agency.

But not all remnants of the Gase era have been condemned to seek employment elsewhere. Marcus Maye, a former Gregg Williams pupil, was bestowed the franchise tag. Offensive representatives like Vyncint Smith and Daniel Brown, the latter’s signing announced yesterday, are likewise back for more. Ten former Jets currently remain on the open market.

Should anyone else be welcomed back? ESM has a couple of ideas in mind…

The signer of three consecutive one-year deals, Hewitt has been one of the Jets’ undisputed defensive leaders. Formerly of the Dolphins and the Marshall Thundering Herd, Hewitt has earned 161 solo takedowns (13 for a loss) over the last three years. He has thus established himself as one of the more reliable depth defenders in the league and could help the team find a sense of veteran leadership with young help presumably coming through the draft.

The Jets’ linebacking corps has been racked by disaster, whether it’s through big-ticket disappointments (Darron Lee) or abysmal luck on the medical front (C.J. Mosley, Blake Cashman). Hewitt is likely seeking some more stable, but if the Jets are looking for a reliable depth option, they shouldn’t hesitate to offer Hewitt something longer. His passable skills on both pass rush and coverage could help soothe Robert Saleh and Jeff Ulbrich’s expected implementation of a 4-3 set.

Poole has built a solid NFL career after going undrafted out of Florida. But he has had apparent difficulty finding work after partaking in a career-low nine games due to shoulder and knee issues. He was one of the Jets’ more consistent defenders during the 2019 campaign and even appeared in Pro Football Focus’ Top 25 cornerbacks list at the end of the regular season. The former Atlanta Falcon was the highest-ranked slot specialist on that list, praised for his work in the nickel.

Bringing back Poole would provide an experienced secondary defender for a group that needs depth and guidance. Young projects like Bless Austin and Bryce Hall, each emerging as day three gems from the most recent drafts, are expected to take starring roles in Ulbrich’s new defense. Poole also holds championship experience, a trait the Jets have appeared to value if their signings from elsewhere are any indication. He was a part of Atlanta’s ill-fated trip to Super Bowl LI and had a game-high seven tackles in the NFC title game win over Green Bay.

It’s surprising that Poole has lasted this long on the open market. The Jets should take advantage before it’s too late.