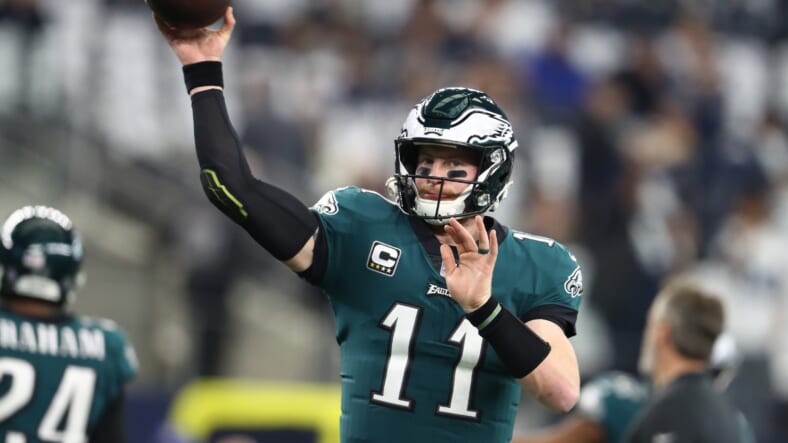 One green team’s move has ripple effects on another. Find out how things have changed for the New York Jets’ QB situation.

The NFL offseason offered an early bird special this week, as it appears a potential starting quarterback vacancy has been filled.

The Philadelphia Eagles dealt beleaguered franchise man Carson Wentz to the Indianapolis Colts on late Thursday morning. Indianapolis, fresh off a brief appearance in January’s NFL postseason, is looking to fill a thrower’s void left behind by the retiring Phillip Rivers. A pair of second-day draft picks (a third in 2021 and a conditional second in 2022) are on their way to the City of Brotherly Love in return.

Fans in the metropolitan area no doubt wonder what this means for a certain green team…ok, maybe two, as Giants fans look toward a Wentz-free landscape for their biggest rival. But fans of the New York Jets, eager for clarity on their own franchise’s passing situation, will likely wonder what this means for their own man on the hot seat, Sam Darnold.

So how does this change things? ESM investigates…

One Trade Partner is Off The Market

A Jets-Colts trade during the offseason seemed to be a football certainty on par with Giants-Cowboys on Sunday night. It was, of course, a pre-draft deal that put Darnold on a New York path in 2018, and several veterans have made the switch from blue to green in recent seasons through both deals and free agency (i.e. Matthias Farley, Quincy Wilson, Pierre Desir).

Darnold potentially ending up in Indianapolis could’ve been on the table. The Colts have reasonably recovered from what could’ve been a disaster from a franchise-standpoint, the sudden retirement of Andrew Luck. Indianapolis is also situated in a division that could well be up for grabs soon. Jacksonville’s rebuild is ongoing, nothing more needs to be written about the Texans, and the Colts tied with Tennessee for the division title.

With Rivers leaving, a serviceable quarterback option like Darnold in aÂ muchÂ better situation could’ve made a strong union. It might’ve come at the sacrificing of draft picks, but with the AFC potentially up for grabs after Kansas City’s Super Bowl no-show, putting Darnold behind their strong line possibly could’ve helped earn a home playoff game. It appears, however, that the Colts will instead embark on that possibility with Wentz instead.

NFL history was forever altered on September 23, 2001, when the Jets’ Mo Lewis laid down a crushing hit on New England Patriots quarterback Drew Bledsoe, leaving some unknown backup named Tom Brady to go into the game to finish things off. The Jets won that game and little else since, because that backup named Brady got it together pretty quickly.

It’s very much fair to wonder, likely on a smaller scale, to wonder what divergence was created in the NFL timeline on December 10, 2017, when Wentz, gunning for MVP honors during the Eagles’ magical Super Bowl run, tore an ACL in a win over the Rams. This is more or less a long way of saying the narrative that Wentz was a Philadelphia bust is ridiculously overblown. The 2020 season was brutal, but it’s Wentz’ only season that could objectively be called bad.

Nobody knows just how much the Adam Gase era stifled Darnold’s development. But, even without the Gase handicap, it’s safe to say Wentz has had a stronger and more impactful career than Darnold to date. So if his value is a pair of second day picks, the Jets probably shouldn’t keep their hopes high when it comes to Darnold, who has, like Wentz, had issues in playing a full 16-game season (unfair as injury-prone labels may be).

Part of the reason Wentz didn’t produce a high yield was the infamous contract extension the Eagles bestowed upon him after the 2018 season ($107 million guaranteed). But one can’t help but wonder if teams will be a little more reluctant to deal anything truly valuable when it comes to a hypothetical Darnold deal.

This offseason is unique in that there could possibly be a dozen teams vying for a new starting quarterback. The Jets appear to be one and two more could also reside in their division (Miami and New England). So the Colts trading for Wentz isn’t the end of the world if they’re looking to truly deal Darnold.

But, a combination of one team off the board, one that is undoubtedly searching for a new quarterback, and teams perhaps being wary of trading high capital, the possibility of Darnold sticking around just raised ever so slightly.

Something that should be kept in mind as the Jets start to navigate through what could be a fateful offseason is that they’re anything but a “quarterback away” from mere postseason contention, much less the Super Bowl. It’s probably one of the biggest reasons Deshaun Watson hasn’t made his way over just yet. They have many, many areas to address, and while there’s a big offseason budget to work with, if they have a relative solution in Darnold, they could take care of other issues like the changes they need to make in their back seven, blocking, and weapons.

Time will tell exactly what the future holds for Darnold, but, for the time being, the Colts and Eagles’ bargain might’ve ensured, for now, that Jets fans need not ditch their No. 14 threads just yet.