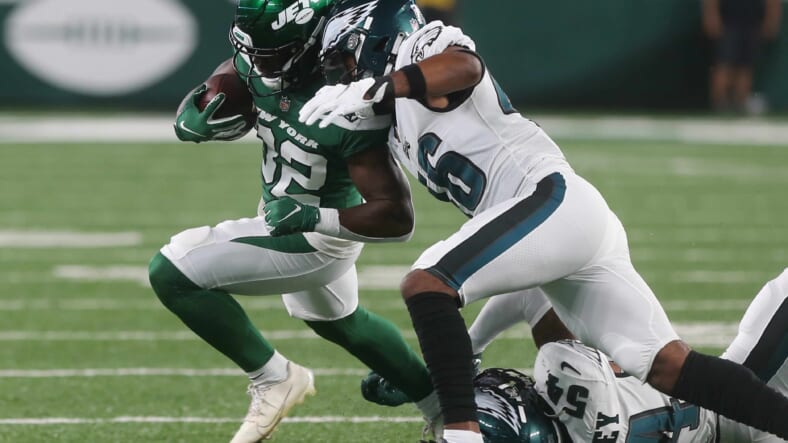 The playoffs might still be a pipe dream, but several New York Jets have the potential to make history this season.

Last year’s New York Jets team made history…albeit by sinking to depths that even the cursed Rich Kotite era managed to avoid (i.e. a 13-game losing streak to open the season).Â This time around, the Jets have a prime opportunity to earn some more positive accomplishments thanks to a lucrative offseason that brought in several talented names and the addition of a 17th game to the traditional NFL schedule.

Which chapters of the green record book should prepare for a rewrite? ESM investigates…

The Jets’ star-crossed history with quarterbacks is often apparent right from the get-go. No freshman thrower in franchise history has thrown more than 20 touchdown passes and only Smith has eclipsed 3,000 yards.

There’s a prime opportunity for Wilson, who healthily passed the aforementioned yardage plateau in his last season at BYU (3.692), to set freshman history in New York. As a whole, subpar quarterback play has been one of the many reasons why the Jets have failed to keep pace with the rest of the league: NFL passers averaged just over 240 yards a game last season (third-best tally in league history) but the Jets mustered only 194. Those same passers averaged just over 27 touchdown passes while New York could barely earn over half of that (16).

Early indications, particularly the pair of preseason games overseen by Wilson, hint that the Jets won’t hesitate to let their new franchise savior air it out. If all pans out, Wilson could realistically have these marks beat by Christmas (possibly Thanksgiving, but the kid has enough expectations placed on him as is).

Zach Wilson throws a gorgeous dime to Elijah Moore for a touchdown#Jets pic.twitter.com/l7eF7ixPF3

Injuries cost Elijah Moore a chance to create some later summer fireworks, but there’s no doubt that the Jets have big plans for him. As it stands, the Ole Miss alum is the closest thing the Jets have had to a homegrown big-play threat since Santana Moss.

Moore’s training camp showings gave off anything but rookie vibes, according to head coach Robert Saleh, indicating that he will take on a large role in the offense immediately.

“He is so deliberate in the way he goes about his business,” Saleh said, per notes from the Jets. “Heâ€™s kind of like an old soul, heâ€™s been here for five or six years already…When you have that ability, especially at such a young age, heâ€™s impressive. He doesnâ€™t make the same mistake twice, heâ€™s a quick learner, heâ€™s always trying to find an edge.”

“Heâ€™s set a bar for sure and weâ€™re just excited to see him grow through the season.”

Jamison Crowder’s cloudy forecast for Sunday’s opener in Carolina (due to placement of the COVID-19 list) should only give Moore a bigger chance to make an impact in the Jets’ offense.

The Jets are in the midst of enjoying a bit of a rushing surplus: the team added redemption-seeking Super Bowl alum Tevin Coleman on an affordable one-year deal while effective depth men Ty Johnson and Josh Adams are back.

But many envision rookie Michael Carter eventually earning the primary rushing duties before the year lets out. Carter was chosen in the fourth round out of North Carolina and was able to contribute in both the Tar Heels’ rushing and aerial endeavors. That made him a perfect fit for new offensive coordinator Mike LaFleur’s system.

The Jets’ presumed rushing attack by committee in the early going should keep Matt Snell’s long-standing freshman yardage record (948) from 1964 safe for yet another year. But Carter has some potential in the red zone, as the scorer of 28 six-pointers during his time in Chapel Hill.

“Michael’s got great vision as a runner,” UNC head coach Mack Brown said of Carter during Senior Bowl prep in Mobile, per Eric J. Wallace of the Pensacola News Journal. “He can catch the ball, but he’s got the speed to go score and run over people.”