The New York Jets Run Defense is on Fire 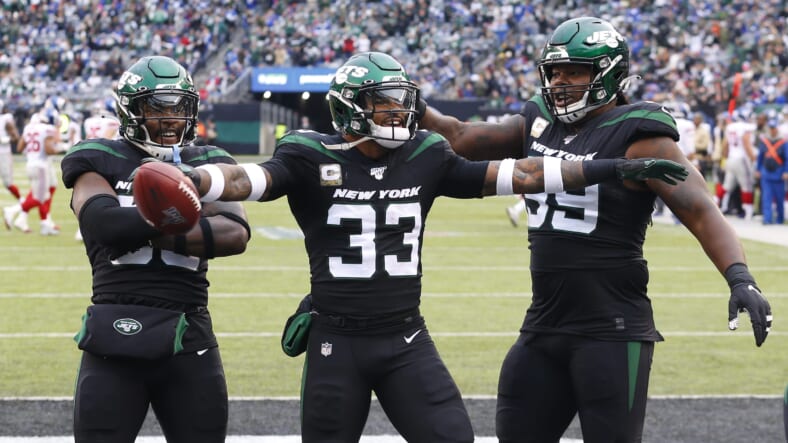 The Jets traded Leonard Williams to the Giants for a third and a conditional fifth prior to their game against the Dolphins. At that point in the year, the Jets had been allowing 94.9 yards per game and 3.3 yards per carry.

That’s good, it’s one of the best in football, but it wasn’t as good as it could be. Since the Jets traded Leonard Williams they have played three games. In those games, the Jets are allowing just 42.3 rushing yards per game and 2.1 yards per carry.

That’s an insanely good rush defense. That hasn’t come against easy rushing attacks either. The Jets went up against Saquon Barkley and Adrian Peterson in the last two weeks. The two of them combined for just 26 rushing yards.

What really stands out about this though, is who is leading the charge. Obviously, the big name is Jamal Adams who has been outstanding the last three games, but he isn’t the only one. Nathan Shepherd has four TFL, James Burgess has three TFL, Henry Anderson has two TFL, Quinnen Williams has one TFL, Foley Fatukasi has one TFL, and Kyle Phillips has one TFL.

Everyone is chipping in, especially the young guys. The way the young players have stepped up since Leonard Williams has been traded is phenomenal. This should tell Jets fans two things.

First, Leonard Williams isn’t the same player he was the first four years of his career. He was having the worst year of his carer and double teams weren’t a part of it. Leonard Williams didn’t have a single sack or TFL with the Jets this year, and since the trade he has zero sacks and zero TFL. Williams just isn’t a good player right now.

Second, this defense is for real and here to stay. All of the players listed above are under contract for multiple years after this one. Most of them are under cost-controlled rookie contracts as well. That should scare the rest of the league.

The Jets are on the verge of having an elite defense. They are just two pieces away, a CB and an Edge rusher. Those are the two hardest things in the NFL to find, but the Jets don’t elite players at the position. They just need competent players who can be relied on.

The Jets run defense will be tested again next week when the Raiders come to town. Josh Jacobs has had a phenomenal rookie year, rushing for 923 yards and seven TDs so far this year. He is averaging 4.8 yards per carry. He is the focus of the Raiders offense. If the Jets’ defense can continue to stop the run like they have the last three weeks the Raiders will be in serious trouble.