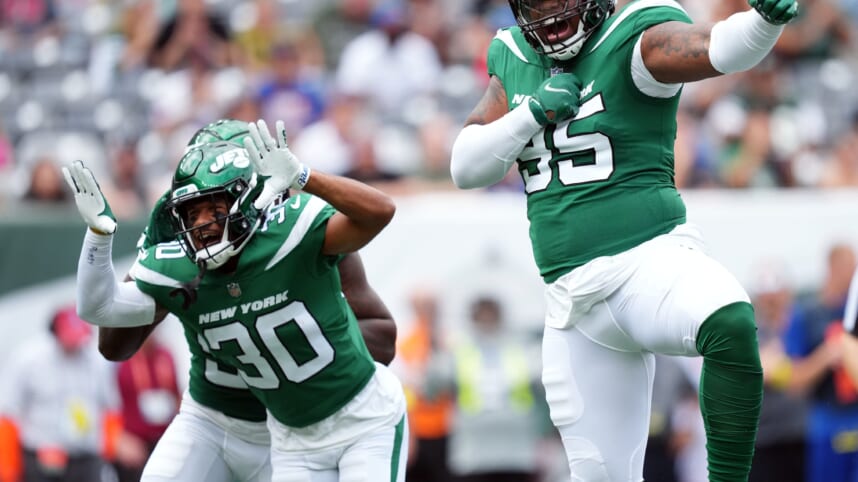 New York Jets lineman Quinnen Williams (95) celebrates his sack against the New York Giants in the first half of a preseason game at MetLife Stadium on Sunday, August 28, 2022. Nfl Giants Vs Jets Preseason Game Giants At Jets

The season is still very young for the 2022 New York Jets. That being said, through the first two games, arguably the Jets’ best strength entering the year, their pass rush, has not made enough of an impact.

Under Joe Douglas and Robert Saleh, the Jets have invested a ton of assets into the defensive line. In hopes, with the scheme, Saleh runs, of it being a dominant pass rush. Similar to what we saw Saleh achieve with the San Francisco 49ers in 2019 en route to a Super Bowl.

With all of the investments into defensive end and defensive tackle, on paper, the Jets have a talented front. The four most noteworthy players together can form a terrific defensive line. Quinnen Williams, Carl Lawson, John Franklin-Myers, and Jermaine Johnson provide the Jets with their most complete front in quite some time. And particularly, a ton of pass-rushing potential.

Even the depth, whether it be Jacob Martin, Micheal Clemons, Bryce Huff, Sheldon Rankins, or Solomon Thomas. Rankins and Thomas are two former first-round picks. Both are undersized, finesse players who fit the Jets’ one-gapping front schematically. At edge, the Jets signed Martin to a three-year contract this offseason. He offers immense get-off speed and bend in this attacking style front. Clemons was drafted by the Jets in the fourth round to bolster the depth. In three years, for an undrafted free agent, Huff has produced whenever he has been given chances.

It leads to the point. This group, constructed to primarily rush the passer as opposed to defending the run, and anchor this defense, has not been productive enough so far.

The Jets have just three sacks in two games, over 118 total snaps. Only five teams have fewer. The Jets have nine quarterback hits so far as well.

The New York Jets’ pass rush needs to get going and has the matchup to do so:

This Sunday, the Jets are back at home in what will be a great environment coming off Sunday’s thrilling come-from-behind victory.

They will be going against the defending AFC Champion, Cincinnati Bengals, who the Jets did beat at home last year.

The Bengals’ biggest concern from a year ago, their offensive line, was significantly addressed this offseason. They went out and acquired four new starters through both free agency and the draft. Yet, the Bengals are off to an 0-2 start, and their greatest weakness remains their offensive line.

In both of their games, the Bengals have averaged under four yards per carry. In Week 1, 3.9 a rush, and 3.6 this last Sunday. They rank 24th in the NFL in yards per attempt. This should lead to the Jets’ defense being in favorable down and distances come third down when the pass rush needs to get home.

Even worse is how bad the Bengals’ pass blocking has been. In the first game of the year, they allowed seven sacks and 11 quarterback hits. In Week 2, six sacks and nine quarterback hits, the total amount of quarterback hits the Jets defense has in the first two games. To no surprise, the 13 sacks the Bengals offensive line has allowed ranks them last in football, comfortably. The next worst is 10 sacks allowed.

Safe to say, the Jets’ defensive front could not ask for a better opportunity to start getting this pass rush going. The talent across the board is certainly there for this aspect of the defense to explode. For the Jets to win on Sunday, putting a winning streak together and getting over .500, the pass rush generating pressure and making a constant impact will be key. They will have the advantage of an electric, loud crowd coming off an exciting September win for the first time in years. Now, it is time for the Jets’ pass rush to get things going.