The New York Jets-New England Patriots rivalry hits new lows, yet has hope, on both sides 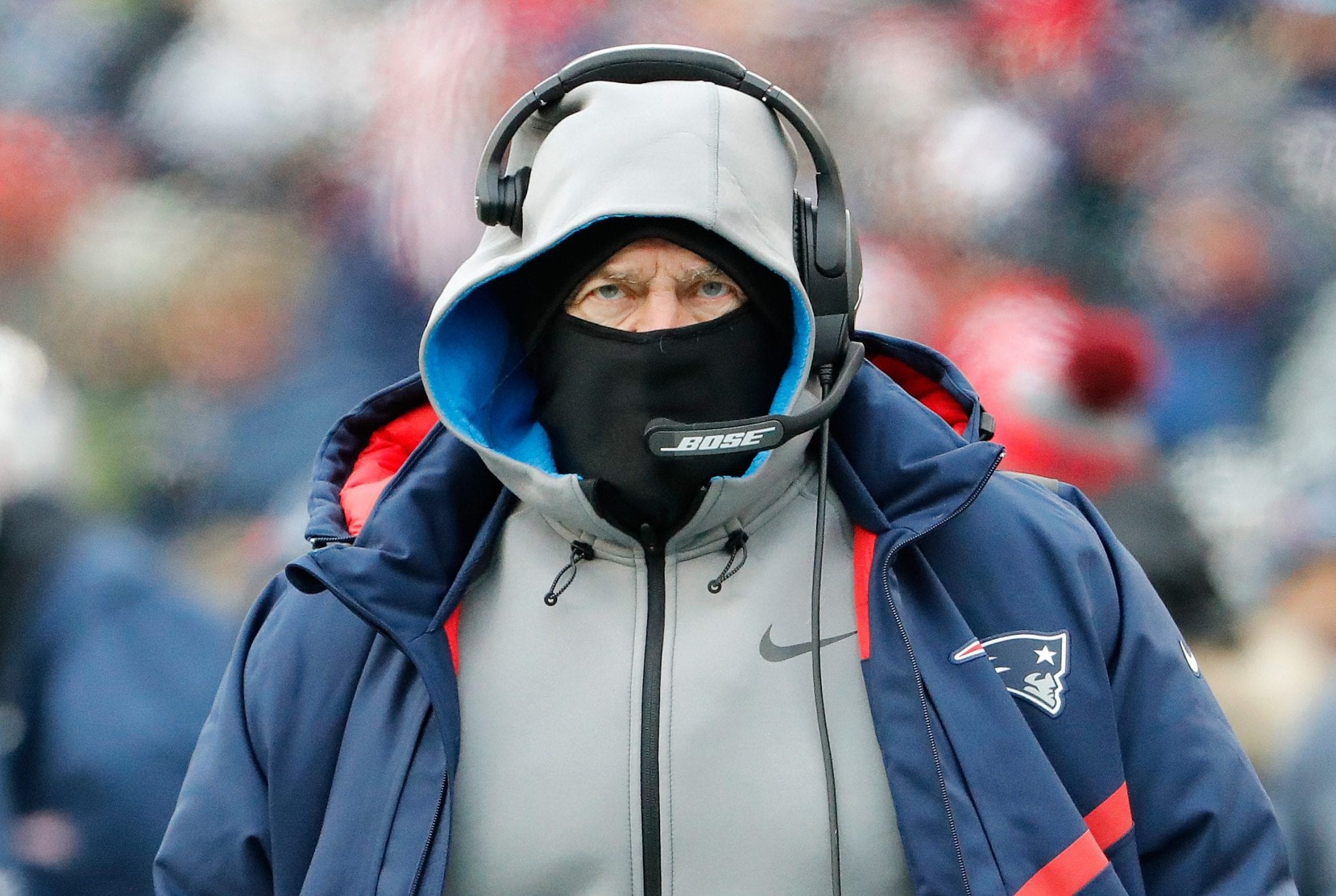 Seeking a win of any kind, the New York Jets can add to the New England Patriots’ woes or play an unwilling role in their redemption.

If you told New York Jets fans that their team would be only two and a half games behind the New England Patriots headed into a nationally televised Week 9 meeting, that would probably leave fans of the metropolitan green team with at least a sliver of hope. After all, New York fans have more or less grown accustomed to professional athletic dominance from the New England area over the last decade. If the Jets would be able to at least somewhat keep pace with the juggernaut from Gillette Stadium, that’d be enough to provide some warm feelings as the season grows colder.

Alas, it appears the Jets may finally be able to catch up to the Patriots…if only because New England has sunk with the face of its franchise absconding to Florida for a de facto early retirement.

The Jets’ ineptitude has perhaps taken the shine off the fall of the Patriots (2-5). It used to take two full years for New England to experience five losses. This time around, it took less than two months. Even the surefire staple of a win over the Buffalo Bills was denied to them in 2020, as the Patriots fell 24-21 to a team that held a 4-34 record against them since 2001. The Buffalo dilemma followed a 33-6 defeat to San Francisco…the worst loss the Patriots had ever suffered at Gillette Stadium since its 2002 opening. This active four-game losing streak even caused stoic head coach Bill Belichick to break character, remarking to former assistant Charlie Weis on SiriusXM NFL Radio that the Patriots had “sold out” in an attempt to immediately win more Super Bowls. New England’s four losses are the most consecutive defeats the team has suffered since Belichick’s debut year in 2000.

This comes while Tom Brady has resumed his status as an ageless wonder in Tampa Bay, to the tune of 20 touchdown passes (having thrown 24 over his final year in Foxboro) and a 103.5 passer rating. Several other familiar faces and contributors to the non-stop AFC East title-spewing machine (i.e. Julian Edelman and Stephon Gilmore) have missed time with injuries. But those in New England know that the way they’ve played during this streak is unacceptable no matter the circumstance.

“Losing is not acceptable in this locker room, in this county, in this state, in this area, in this region, so, Cameron Newton, you need to pick your (expletive) up,” Cam Newton, Brady’s successor, said after the San Francisco debacle, per Mark Daniels of The Providence Journal. “I understand that type of football play is unacceptable. I’m all about putting the football team in the best position to win. That’s what I have to do here moving forward.”

Much as they’d probably like to, the Jets (0-8) and their fans are in no position to laugh at and openly revel like the rest of the football world in New England’s demise. They continue to hunt for a mere single, though a close game would probably set off a parade down the Canyon of Heroes after enduring an average margin of defeat of three possessions over the first half of the season. The winless first half of the year was addressed by general manager Joe Douglas earlier this week. He immediately dismissed any idea of tanking and called the Patriots out by name in his statements, directly referencing the teams’ Monday night matchup (8:15 p.m. ET, ESPN) when asked about the idea of the Jets being better off with a loss.

The Patriots’ struggles and the fact they’re traveling to MetLife Stadium on Monday have placed the Jets in a most unusual spot: even with no wins, they might just well be in a…trap game?

After all, if the Jets are going to eke out a win at some point, doing so against the cold Patriots might be the best chance left on their slate. With the exception of the Patriots and their first visit to SoFi Stadium to battle the Chargers in two weeks, each of the Jets’ remaining opponents are either in a current playoff spot or no more than a half-game out. Predictably, the players on the Jets’ current rosters are giving no credence to clinching the top draft pick. As the NFL’s only winless team, the Jets have the inside track for the top overall pick next spring. But doesn’t matter to the guys already dressed in green.

Starting quarterback Sam Darnold, 0-2 in his career against the Patriots, likely won’t play on Sunday due to a shoulder issue. But his words can serve as inspiration to he remaining teammates that will take the MetLife Stadium field on Sunday.

“Obviously everyone wants to win,” Darnold said, Dennis Waszak of the Associated Press. “That’s why we’re in this business. That’s why we’re professional football players. We got here by winning football games. For us, we’ve just got to put our heads down and go back to work. I feel like if we do that, we can win this game and worry about the next when it’s up.”

Darnold will likely be forced to give way to Joe Flacco, who knows at least a little something about getting the best of the Patriots. Though he’s 3-6 as a starter against New England, one of those wins came in the 2013 AFC title game, where he threw for three touchdowns in the Baltimore Ravens’ trek to Super Bowl XLVII.

But the true focus on the Jets’ young players, particularly on the offensive front. First-round choice Mekhi Becton will partake in the first of what’s envisioned to be many Jets-Patriots matchups. Fifth-round pick Bryce Hall will possibly taking on a bigger role in defense upon the release of Quincy Wilson. Denzel Mims has gotten off to a solid start after the second-round receiver was mostly forced to the bench with injuries.

Mims, chosen in the second round, is expected to be joined by Jamison Crowder and Breshad Perriman, each of whom have likewise missed time due to medical woes. Should they all partake in Monday’s game, it’ll mark the first time that the Jets have the the top receivers they envision having at the top of their depth chart at the start of the season.

“I think that’s really where we’ve got to make some strides there,” Gase said of his young receivers. “Just kind of like hearing the call and that picture pops in, you go to exactly where you need to go, you know the adjustments and you can play fast. And we’ve just got to keep working through all that stuff, that’s part of the growth process.”

Though the standings are a lost cause, to say the least, the Jets will have something major to play for on Monday, namely missing out on dubious franchise history. Should the Jets fall to New England, the 2020 edition would become the first team in franchise history to start 0-9. Even the one-win squad under Rich Kotite in 1996 avoided such a mark, doing so in Arizona in the ninth game.

On the other side, the Patriots aren’t so concerned about their recent dominance of the Jets as they are with getting back on track. New England still believes they can continue a postseason streak dating back to 2009, but any chance of continuing that hinges on a victory against the Jets. The Patriots currently sit two-and-a-half games behind Cleveland for the final AFC wild-card spot.

On the subject of winless teams, New England cornerback Jason McCourty has some prior knowledge. A former Cleveland Brown, McCourty was a part of the NFL’s last winless effort, the 2017 edition that joined the 2008 Lions in 0-for-16 infamy. Two early wins will help New England avert such a fate, but McCourty hopes that lessons learned during the harrowing 2017 campaign will help the his current compatriots get back on track.

“Don’t forget where you came from. I went through an 0-16 season and a 2-14 season and a 3-13 season. So, I’ve been through worse,” McCourty said in Daniels’ report. “You’re not going to change it by walking around here being negative or with your head down or declaring your season to be over. The only way you’re going to create change or get out of the situation you’re in, is to continue to work.”

“I think that if you’re negatively working, those are going to be the results you’re going to get. Something that’s often said around here is ‘turn the page’ and ‘On to whatever the next team is.’ For us right now, it’s the Jets. That’s our main focus. We can’t do anything about the loss to the Bills or the loss to the Niners.”