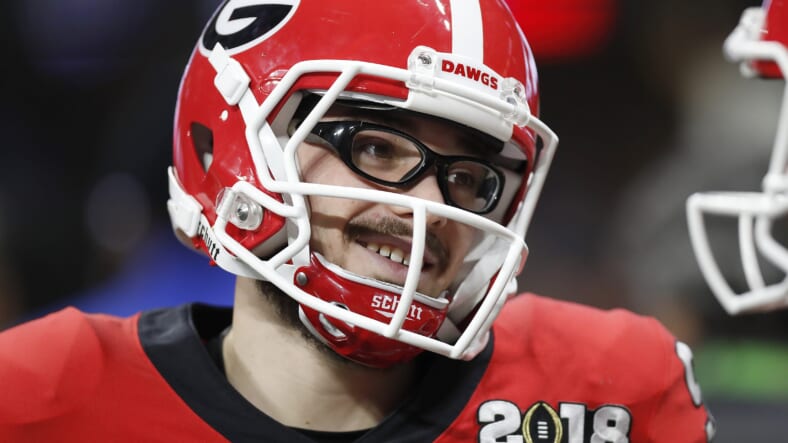 The New York Jets have to consider using their expanded draft stash on special teams solutions, which will put a developing offense at ease.

Special teams conspiracy theorists could probably claim that the NFL’s latest innovations and trends are trying to get rid of the third phase of the game entirely.

When extra points got too automatic, the league tacked on 15 yards to them, leading to increased tries for two points. Whereas the point-after-touchdown was moved back, kickoffs were moved up. Some felt their travels to the 35-yard-line (as well as a “reward” for a touchback being access to the 25) were the first step in having the kickoff go the way of the single-bar facemask. The increasingly prevalent analytics departments also weren’t helping matters, as evidence continues to mount that it makes more sense to go for it on fourth down in lieu of kicking or punting.

But special teams undoubtedly hold a place in the modern game. For a team that is situated with an offense that struggles to enter the end zone on a consistent basis, having a proven kicker is a perfect safety blanket. If defeat must be admitted, the least you can do is arm yourself with a good punter.

Hence, the New York Jets must spend this draft session, at least the latter portions, on special teams assistance.

The Jets obviously have aspirations of becoming frequent end zone visitors. They moved up in the draft to find a franchise quarterback. Free agency currency has been dealt to a star running back and blocker to clear the way for him. But until the team can find the end zone on a regular basis, having reliable specialists are absolutely vital. Considering the fact that Robby Anderson (by far their most reliable receiver since 2015) sought bluer pastures in Carolina, regular six-point possessions are easier said than done.

The long-term long snapper spot was readily fulfilled last season. Thomas Hennessy has played four incident-free years thus far and is destined for four more through 2024. But there are several needs that must be fulfilled as the Jets’ latest rebuild continues.

Over the past two seasons (the first of hopefully many overseen by Sam Darnold), the Jets have kicked 63 field goals, a number tied for seventh in the NFL. The surplus was tolerable when Jason Myers was booting triples from all over the field (17-of-19 from at least 40 yards out), but the Marist alum has moved on to Seattle. Since then, four different kickers have dressed in a green uniform, the most recent of which is Sam Ficken.

Those we believe that special teams are meaningless to the Jets…who, granted, still have holes to fill…surely missed their opening weekend tilt against the Buffalo Bills. The Jets’ heartbreaking 17-16 loss was made all the more painful by a missed field goal and extra point from first-game participant Kaare Vedvik. Ficken surfaced shortly after, but was hardly reliable with a 70 percent success rate (19-of-27).

The Jets did bring in a new kicker shortly after the season’s end. Alas, it was Brett Maher, one of only two qualified names below Ficken for conversion rate (20-of-30, 67 percent). Simply put, the Jets need competition, barring a miraculous scoring outbreak next season.

It’s understandable why the Jets didn’t upgrade in free agency. The most reliable names (Mason Crosby, Ka’imi Fairbairn, Dan Bailey) re-signed with their prior squads. Greg Zuerlein was coming off a career-worst season, while Stephen Gostkowski and Ryan Succop were working off injuries.

The Jets are blessed with a deep draft in several of their need positions. Kicker is one of them.

2020’s kicker slot is highlighted by the bespectacled wonder that is Rodrigo Blankenship of Georgia. The former Bulldog may be more of an Athens staple than the hedges and Uga combined. Save for Georgia’s unfortunate collapse in the 2018 National Championship Game, Blankenship might’ve earned everything a kicker could achieve at the Football Bowl Subdivision level. He capped things off with the 2019 Lou Groza Award but his name also appears in the slots reserved for the kicker of the longest field goal in Rose Bowl history and the all-time leading leg scorer in SEC history. Blankenship also has an appearance in the 2019 ESPN Body Issue and a rap track to his name, certainly a unique accomplishment amongst his peers.

Also among the draft options is the perfectly named Jet Toner out of Stanford. Toner’s distance needs work, and he’s coming off a leg injury, but he completed all 101 of his extra points and went 14-of-15 in his last full season. Small-school option Tyler Bass (Georgia Southern) struggled in his senior season but impressed during the Senior Bowl preparation in Mobile. With the Jets afforded an eighth draft pick, particularly their final one in the sixth obtained from Kansas City through the Darron Lee transaction, they can afford to use capital on a kicker spot.

Somewhat murkier is the Jets’ dilemma at punter. It seems like an avoidable spot, but the fact remains that current free agent Lac Edwards led the league in punts with 87. That does come with a Luke Falk-sized asterisk (25 of Edwards’ boots alone came during Darnold’s three-game absence), but the Jets can’t afford to be negligent. If they fail to bring Edwards back, an SEC trio of Braden Mann (Texas A&M), Tommy Townsend (Florida), and Joseph Charlton (South Carolina) could fill in the gap.

The Jets can also fulfill their special needs earlier in the draft. After enjoying the antics of Andre Roberts’ first Pro Bowl season, their average kick return plummeted to 22nd in football after enjoying a third-place finish last season. While the team enjoyed some late traction in the punt return game with Vyncint Smith, it wouldn’t hurt to full multiple needs within the first two days. Virginia’s Joe Reed led the ACC in kick return average twice and also can work as a sizable slot receiver (6’0, 224 lbs.). Jalen Reagor and K.J. Hamler could each go in the second-round and can contribute in more ways that one.

Enough tired memes and jokes have been made at the specialists’ expense. Enough Jets fans are also, perhaps, still traumatized by the second-round selection of Mike Nugent during 2005’s proceedings (especially when Vincent Jackson and Frank Gore went not so long after).

But if the Jets want to end their endless cycle of misery, or at least start to put a dent into it, extra draft capital should go toward the third phase of football. The new Jets brass has already shown that they’re willing to do things differently, especially when it comes to the offensive line. Logic at least hints you can find an undrafted rookie in the scrap pile (i.e. Fairbairn to the Texans in 2016), but the Jets have played by the laws of football logic long enough.

These draft diamonds in the rough, practitioners of football’s third phase, could help provide the spark that burns the perception of “Same Old Jets” down.