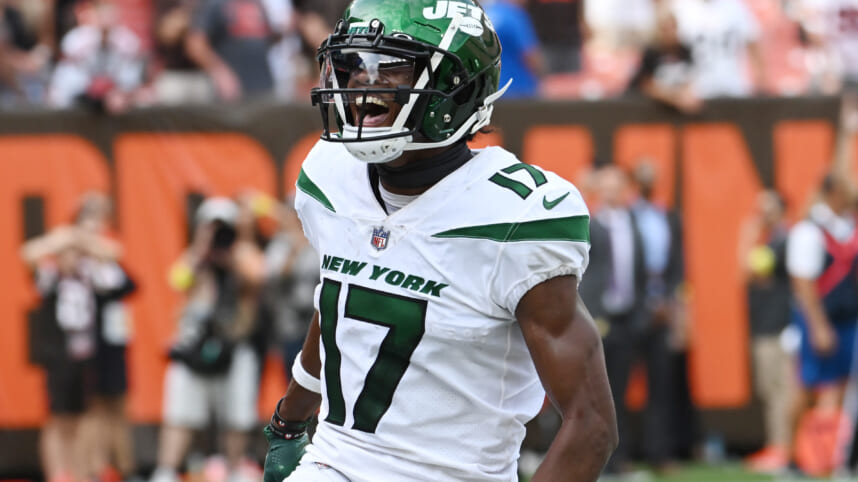 New York Jets first-year wide receiver Garrett Wilson was awarded Rookie of the Week earlier today. It was a well-earned honor for the rookie coming off of a day in which he caught six passes for a career-high 115 yards, leading the Jets’ offense.

Propelling the offense with exciting, big plays was exactly what the Jets drafted Wilson 10th overall to do. The 6-foot, 192-pound wide receiver is gifted with a relatively complete skill set, which has been evident to this point in just his first eight games.

His versatile set of skills starts with his pre-snap usage. Wilson can line up both in the slot and out wide.

Athletically, Wilson is immensely gifted. He has 4.38 speed to go along with great quickness and change of direction ability. He has some unique movement skills that have proven to make defenders look bad before or after the catch.

Wilson has shown the ability to utilize his speed and quickness to his advantage as a route runner. He has proven that he can consistently defeat man-to-man coverage for the Jets’ passing game.

Then, at the catch point, Wilson can jump, stay in the air, and adapt to the ball. His long arms and big hands give him a huge catch radius in jump-ball, contested catch situations he has shown he can routinely win, as shown by his final catch in Week 8.

After the catch, Wilson has made defenders miss in space with his exceptional twitch and shiftiness skills.

Wilson has made plays both inside and outside the numbers for the Jets’ offense on all three levels of the field with his quickness, contested catch ability, and speed. He has made an impact in the red zone. The gadget ability around the line of scrimmage Wilson offers as well was on display twice last Sunday.

As mentioned above, there is really nothing that Wilson cannot do. He has sparked the Jets’ offense this season in multiple ways.

Those stats put Wilson on pace for a rookie year consisting of over 70 catches and 900 yards with four touchdowns. A great year one.

On a week-to-week basis so far in 2022, Wilson has been a featured option for the Jets. He has had at least four targets every game, highlighted by weeks with 14, 11, 8, and 7 opportunities his way.

Wilson has recorded four catches or more in five of eight games. His best came in Week 2 when he had eight.

In terms of receiving yards, Wilson has gone over 40 five times. He has eclipsed 100 twice. Wilson has been dependable when it comes to generating explosives for the Jets’ offense. In four of eight games, he has a catch of at least 23 yards, three going for over 30.

Wilson has won over the middle of the field and in traffic, proving his worth as an intermediate-level receiver. He has made some exceptional, tough grabs as well, exhibiting his hands.

Wilson’s intelligence is another great attribute he offers. Playing in the slot from the jump as a first-year player is a challenge he has made look easy. Wilson has an innate feel for the game and ultimately knows where to be, especially in high-pressure situations. He worked perfectly with Zach Wilson on an extended play that went for 54 yards the other day.

Wilson is known off the field for having strong character, work ethic, and love for the game. Pair that with his athleticism, and the potential of the 22-year-old is immeasurable.

Wilson is off to a great start in his young career with the Jets. With the team being 5-3 and competing for a playoff spot, continued splash plays from Wilson will only help this football team’s chances. Wilson has proven what a promising, exciting long-term future he has as a core Jet.