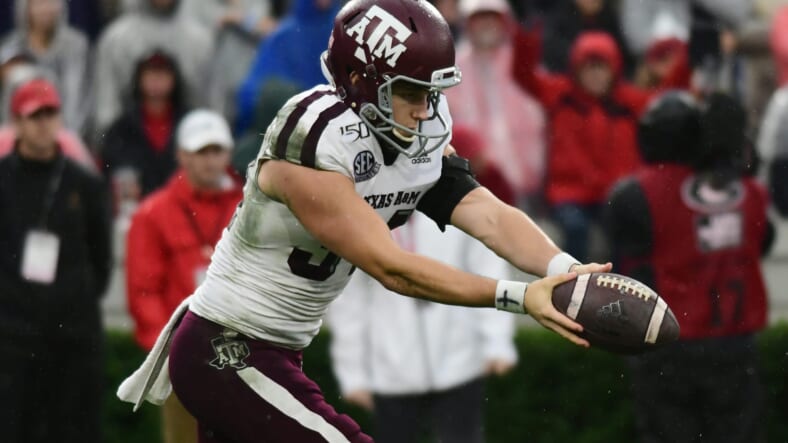 ATHENS, GA – NOVEMBER 23: Texas A&M Aggies Punter/Kicker Braden Mann (34) punts the ball during the game between the Texas A&M Aggies and the Georgia Bulldogs on November 23, 2019, at Sanford Stadium in Athens, GA.(Photo by Jeffrey Vest/Icon Sportswire via Getty Images)

The New York Jets’ sixth-round choice of Braden Mann raised some eyebrows, but the Texas A&M punter could be their biggest new contributor.

Ah, the punter. He’s football’s living, breathing white flag, a personified excuse to get a beverage refill or visit the restroom. His prescience, at least in his designated kicking duties, is a de facto admittance of failure to score, an admission of defeat that gives the other team the ball back.

Even a punter’s finest moments, at least when performing his designated duties of pinning the opponent deep can be erased. Few remember, for example, the New York Giants Steve Weatherford pinning the New England Patriots at their own six-yard-line after the opening drive of Super Bowl XLVI. When the Patriots were called for an intentional grounding penalty on the very next play, Weatherford became indirectly responsible for providing the Giants early momentum in the form of a safety. It set the pace for a 21-17 path to a fourth Super Bowl title, as the Giants built an early lead by scoring a touchdown shortly after. Whereas Weatherford’s part in a championship laid forgotten, it breaks the internet if a punter gets kicked in the fact on a return, as Spencer Lanning of the Browns found out the hardy way.

The New York Jets are certainly used to the concept of punting defeat. No one in the NFL has punted more over the last four seasons, as 339 drives have ended with a boot. By no coincidence, the Jets rank dead last both yardage and points scored over the same span. Their cumulative 21-43 record outranks only lowly Cleveland.

It’s no wonder why the Jets have spent the most recent transaction periods making headline news. They would spend their first top-three draft pick in over two decades on quarterback Sam Darnold in 2018. A $52.5 million payday awaited running back Le’Veon Bell, even after he sat out a whole year in Pittsburgh.

When it became clear that those two were mere athletes and not miracle workers, they brought in offensive linemen during the 2020 free agency process. Last week’s draft, rife with shifts via trade up and down the board, was equally heavy on offense. The team opted for further protection in the form of Louisville blocker Mekhi Becton (11th overall) before bolstering their receiving corps with Baylor’s Denzel Mims (59th). Using their next two picks defensively, the final day of the draft reverted to an offensive theme. Spell options for both Bell (Florida’s Lamical Perine) and Darnold (Florida International’s James Morgan) were chosen before another block in a logjam in the 120s. Secondary depth would in the fifth round through cornerback Bryce Hall.

Then, with their final pick in the sixth round, the 191st overall selection…the Jets took a punter.

Even at such a late stage, wedged between third-day interest enhancers like Zoom concerts from Luke Bryan and One Republic, the selection of Texas A&M’s Braden Mann raised eyebrows. Surely, the Jets could’ve used the pick further replenishing their needs? Interior blocking help in legacy fashion would go immediately after when Green Bay took Jon Runyan Jr. at No. 192. Robby Anderson’s departure left plenty of renovations in the receiver’s department…surely an option like First-Team All-AAC receiver James Proche would’ve sufficed? Options at furthering their pass rush and secondary were likewise available…so why Mann, the punter? Even the NFL’s historic ledgers weren’t so kind. Of the eleven punters with the highest averages in NFL history, four (including second-ranked Johnny Hekker) were undrafted.

The selections of Becton and Mims are the ones that already lasting long-term effects on the franchise’s well-being. But of the nine athletes added to the Jets’ roster during 2020’s virtual selections…Mann may be the one that can lead the team to the most immediate wins.

Regardless of your opinion of Darnold so far, there is no denying that the Jets are a team that struggles to reach the end zone on a consistent basis. Until that happens, a good punter is a must-have accessory in New York. The Jets got it right, or at least had the right idea, when it came to Mann.

Current free agent Lac Edwards, the overworked soul tasked with the excess booting, was serviceable (45.5 average) after joining the team as a seventh-round pick in 2016. But the Jets can’t afford serviceable efforts right now. It’s similar to when a team substitutes an acceptable quarterback for an extraordinary, dynamic talent in the interest of providing a spark. New York’s defense, while packed with talent, can’t afford to begin drives with their backs immediately pressed against the wall. Last season, the possessions of Jets opponents typically just past their own 31-yard-line (an average starting spot of 31.26, to be precise) Only Tampa Bay (31.70) was worse.

With no traction made in Edwards’ case to return, the Jets offered a future contract to former Pittsburgh preseason participant Ian Berryman. But with the offense’s struggles and defense’s desperation being the critical issues stifling the Jets’ efforts to achieve a mere winning record, a more reliable commodity was needed.

Should he fulfill his potential, Mann can at least provide levity toward those crucial issues.

One could argue that Mann might’ve been available after the draft, but that probably wouldn’t have been the case. Not only did another punter go in the seventh-round (Atlanta chose Syracuse’s Sterling Hofrichter), but Mann literally had a career for the ages in College Station. His historic junior season saw him become a literal field flipper, as his 51 yards per kick became an all-time NCAA record. Other shattered records included most punts of at least 60 yards (14) and the single-game punt average tally (60.8 in a September tilt against Alabama).

Mann’s trek to history led to the 2018 Ray Guy Award (bestowed to the nation’s top punter) and unanimous All-American honors (joining new Jets teammate Quinnen Williams in such an honor). It takes a lot for a season that featured a 47.1 punt average and all-SEC honors to appear as a slight disappointment…but that’s just how hard it was to live up to Mann’s 2018 antics.

To top it all off, those complaining about eschewing defensive depth for a punter had their prayers answered nonetheless. The Jets shipped their final pick of the afternoon, the 211th selection acquired from Kansas City over to Indianapolis in exchange for cornerback Quincy Wilson. Instead of a potentially expendable final pick, the Jets now have a veteran that can truly compete for a roster spot and one that will work alongside former Colts teammate Pierre Desir.

The Jets’ selection of a punter is not the one fans necessarily wanted, but one they needed. Mann can buy an offense struggling to gain traction some time as they work out their growing pains. While the Jets have undoubtedly improved, no one is expecting them to engage in a scoring shootout with their Week 1 opponent. Chemistry must be developed on the offensive line and Darnold must find a new favorite target.

Until that time comes, Mann is going to be the one putting both sides of the ball at ease. He can give a defense a favorable spot to work with and alleviate pressure from the offense to score on every single play while they get their act together. Perhaps a microcosm of the Jets’ draft as a whole, Mann (and, to a lesser extent, potential kick return candidate and third-round choice Ashtyn Davis) is the type of selection that can improve all three aspects of the game.

The Jets’ draft class is set to be long remembered for what Becton and Mims accomplish. But the early stages of Mann’s career could truly fuel the opening stages of what the tri-state area hopes is a lasting franchise turning point.