The New York Jets are resilient…but is that enough to succeed in 2021? 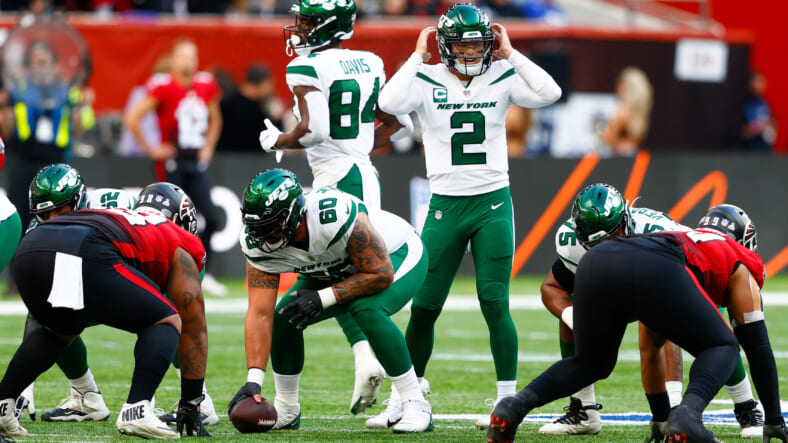 The New York Jets have undoubtedly grown over the past year on the football calendar. But is this type of progress acceptable?

The modern New York Jets are a team of many labels. “Boring”, however, doesn’t make the cut. Many watch the Jets for gridiron schadenfreude and meme ammunition, but even the most relentless virtual court jesters who rely upon the Jets for their material had to take a legitimate interest in what the team had cooking in 2021.

The highly-sought Robert Saleh was granted the head coaching reins while rookie quarterback Zach Wilson was surrounded by the best offensive weaponry a 2-14 team could afford. Corey Davis, Tevin Coleman, Keelan Cole, Tyler Kroft, and Morgan Moses weren’t forming an All-Pro team, but each had two vital traits for a metropolitan squad in transition: postseason experience and something to prove.

It was hard to label the Jets’ 2021 expectations: they upgraded from the previous year’s group if only because anything short of folding the franchise would’ve been seen as an improvement after last season, the cursed final year of Adam Gase’s doomed tenure. There were legitimate reasons for excitement, but nothing that would allow the Jets to crash the AFC’s postseason party hosted by Kansas City and Buffalo.

Saleh, a stabilizing force for a franchise in desperate need of any footing, was kind enough to stop the debate over the Jets’ expectations during the fanfare surrounding his introductory press conference in February. The former San Francisco defensive coordinator flat out promised that the road back to NFL respectability would be paved with adversity. But he was willing to embrace such hardships with open arms in the name of growth.

“Iâ€™m genuinely excited for adversity, because a lot of different things are going to pop up,” Saleh told Albert Breer of Sports Illustrated shortly after his hire. “Everybodyâ€™s going to find out a little more about themselves when adversity hits. I think thatâ€™s when teams have their greatest amount of growth, itâ€™s through adversity…thatâ€™s what Iâ€™m most excited for. I want to see how people respond.â€

Having arrived at a league-mandated landmark…their Week 6 open date traditionally granted to those partaking in the NFL International Series…with a 1-4 record premature analysis of the Saleh era has gotten underway. The latest defeat came overseas, as the Jets fell by a 27-20 final to the Atlanta Falcons in London.

There’s no use in fully assessing Saleh and Wilson; barring complete and utter disaster, they’ll return for 2022. Even the most optimistic Jets supporter would’ve been foolhardy to assume playoffs and the overwhelming standings onslaught has come to pass.

The Western New York juggernaut that rules the East division has been everything advertised and then some. A desperate wild card bid is likely already thwarted by the usual expected suspects (i.e. Cleveland, LA Chargers) and surprise surges in Denver, Cincinnati, and Las Vegas.

Developmental growth is what will define the Jets’ individual seasons and efforts until a more complete team is assembled…so what can be said about 2021?

Through five games, it’s undeniably clear that this team is blessed with resiliency, perhaps the best trait you can ask for when you’re prophetically doomed to a year of rebuilding. That trait is best on display through a defense held together with the masking tape of additions obtained through Saturdays of draft weekends past and present (i.e. Bryce Hall, Brandin Echols). A unit that was supposed to be headlined by the antics of Carl Lawson, Marcus Maye, and Jarrad Davis has given way to breakout campaigns from bargain bin, end-of-camp releases like Quincy Williams and John Franklin-Myers.

For better or worse, the Jets have kept their fans more invested in their games from a scoreboard perspective. New York has faced sizable deficits over its first five games (summiting at a 26-point shutout margin in Denver) but they’ve had the decency…or cruelty?…to keep pace with their powerful opponents until the dam of gridiron destiny finally broke.

But while the Jets have kept things close in terms of the final score, the matters and context as to how they got there have been dubious. Sunday’s latest defeat was a prime opportunity for the Jets to cash in: they were coming off an inspiring win over division leaders from Nashville while Atlanta was missing blooming top receiver Calvin Ridley. Going up against the sputtering Falcons, whose pair of victories have come against the horrifying metropolitan duology of MetLife Stadium, could’ve been almost scripted by a pro-Jets screenwriter.

Instead, the Jets allowed the Falcons’ aging franchise quarterback to look like the Matt Ryan of old (season-best 342 yards) and heralded a Kyle Pitts breakout session (9 receptions, 119 yards, and a score). Granted, perhaps a defensive regression should’ve been expected: the unit has been carrying water for the offense all year forced to start an average drive only 65 yards away from the end zone, an NFL worse. At some point, they probably had to snap, and a breaking point of sorts came on Sunday.

But, despite that, the Jets keep things decent in their final margins, especially when removing the particularly ugly Denver outlier. For as much hullabaloo the Sam Darnold reunion caused, his new employer prevailed only by a five-point margin. After four Wilson interceptions, a visit from the New England Patriots was still only a two-possession game at the half.

So the Jets have established themselves as a resilient team, a pesky group that isn’t going to back down from a challenge and could perhaps even play up to its competition. But how long can they do this? How long can beautifying the scoreboard be a sustainable, respectable goal?

Last week’s win over the Tennessee Titans personified that best-case scenario of what the 2021 season can be: it was a win over a contender, a throat-clearing gesture to the rest of the football world that better times were finally ahead for one of professional sports’ most downtrodden and lampooned franchises. Sure, the win came as the Titans were missing the services of firey receiving options A.J. Brown and Julio Jones, but considering the long-term medical woes the Jets have endured over the first month of regular season play alone that’s hardly a valid excuse.

Wilson, the architect of 297 yards, two touchdown passes, and the Jets’ first comeback from two possessions down since December 2018, created a point on the team franchise timeline that couldn’t be ignored. Of note, was focused on not only the positives but on the work ahead as well.

“I wouldn’t say we’ve fully arrived,” Wilson said, per Jack Bell of the team website. “This is just another puzzle piece of where I want to get. Now we have to stack the blocks. This was a step in the right direction.” Saleh concurred, noting that he hoped the win over the Titans would help the young team’s confidence “snowball”.

Alas, the opportunity to create a winning streak fell by the wayside on New White Hart Lane and leaves a sour taste in the Jets’ mouths. The lost chance to create a rare, guaranteed, three-week period of good vibes is likely not lost on a team that has embraced the low expectations and opinion the football-loving public has bestowed upon them.

Saleh, Wilson, and Co. can preach for hours on end about the Jets’ growth and development, how pleased they are in what they’re building. But all that means nothing if they can’t prove their progress in the most important…or at the very least most conventional…metrics: the win column and the three-hour windows on Sunday afternoon (or, in the London case, morning). Improving the former is a little too much to ask for, but the team can hardly prove that they’re moving in the right direction when they’re falling behind by two possessions in each of its games.

The Jets have been macabrely blessed with the gift of the fact that this season is an automatic improvement over last year’s disaster. But that doesn’t mean they have to be satisfied with it.