The curious case of C.J. Mosley and the New York Jets 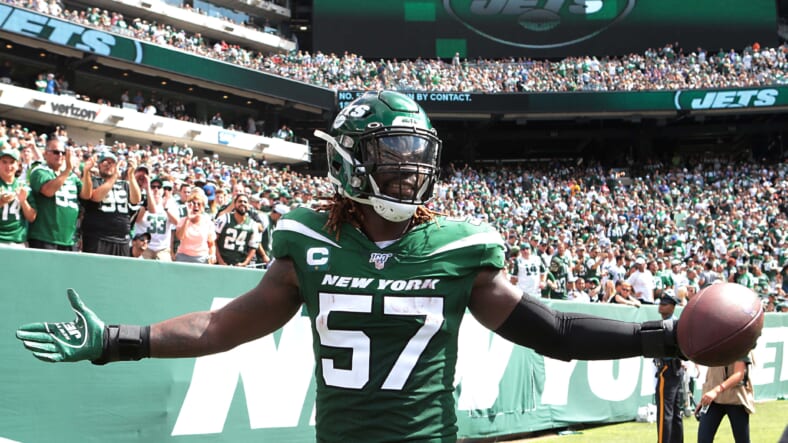 The New York Jets’ $85 million man has played in only two games in the past two seasons, but there’s hope that the investment will pay off.

From a human standpoint, C.J. Mosley’s tenure with the New York Jets, which began during the 2019 offseason, can’t realistically be called a bust. Medical calamities, exacerbated by the star-crossed nature of Jets football, have marred his two years in green, necessitating long layoffs. A groin injury limited him to two games in his debut year before he opted out of last season entirely in the wake of the ongoing health crisis.

Neither of Mosley’s absences can be registered as excuses. Football is a violent game and injuries happen. A whole separate conversation can be had over whether oft-injured names like Sam Bradford, Robert Griffin III, and Ki-Jana Carter can rightfully be labeled disappointments as well. As for 2020, Mosley was one of many throughout the world who simply chose not to go head-to-head with a disease lacking data, a decision he was well within his rights to make.

Nonetheless, these factors far beyond the Jets’ control have nonetheless placed Mosley’s contract on countless “worst of” lists through the football press. Mosley inked a five-year, $85 million deal in March 2019 and has partaken in only two games since. Only adding to the awkwardness of the situation is the idea that Mosley feels like a relic, a hand-me-down from a forgettable era of football as the last big contract Mike Maccagnan dealt.Â  But, despite a small sample size, it’s not hard to be seduced by Mosley’s potential The Jets have seen what Mosley is capable of at full strength, as his one shining moment in a green uniform saw him earn six tackles, a fumble recovery, and an interception of Josh Allen taken back for a touchdown, opening scoring for the 2019 campaign. When Mosley left with the aforementioned groin ailment, the Jets blew a 16-0 to Buffalo and have won only nine games since then.Â

Mosley’s status is a subplot that’s buried in an offseason rife with questions and one that’s likely going to end with the Jets’ roster looking drastically different. Cutting him would incur an $8-12 million cap penalty, while a trade would net back $1.5 million toward the cap (albeit with $6 million in dead money). But that doesn’t appear to be the approach the Jets plan on taking. There’s hope amongst the new Jets brass that one of the final big deals from the Maccagnan era can make an impact and live up to the hype of his deal.

When Robert Saleh took to the virtual podium for the first time since his hiring last week, he was sure to point out that Mosley does have a future in the organization after Mosley stopped by his office upon a visit to One Jets Drive.

“It was awesome to get to meet him…My expectation is no different than any other player thatâ€™s here,” Saleh said, per notes provided by the Jets. “For C.J., (the goal is) to continue to be the pro that heâ€™s been since the day he was drafted and the leader that heâ€™s been and find ways to get better every single day. C.J. definitely has that mindset and just a pleasure to have been able to have gotten a chance to meet him.”

During his time as the defensive overseer in San Francisco, Saleh gained a slight reputation as a coach that could provide redemption to aging name-brand veterans who have struggled to regain their elite status. Richard Sherman, for example, reintroduced himself to the national picture under Saleh’s watch and was among his hiring’s biggest praisers. Jason Verrett got his career back on track through a strong 2020 campaign after playing only two games over the prior couple of seasons due to injury. Their union could prove beneficial on both sides: Saleh has an accomplished, veteran lump of clay that can make an immediate impact in a desperate locale, particularly in a 4-3 set, while Mosley has a strong mentor that can help him reclaim the narrative on his New York career.

Mosley has kept mostly quiet as he continues to work his way back, with Saleh and fellow linebacker Blake Cashman keeping the green masses updated on his status. But those who feel like Mosley is content to take the money and run should recall his comments prior to his opt-out. Simply put, the former Baltimore Raven was sick of rehabbing.

“It’s been annoying, honestly,” Mosley said of sitting out, per team reporter Olivia Landis. “You set a timetable up and you’re not ready and you feel like you’ve had a setback. But you’ve just got to be patient. I just have to make sure I trust the process as far as therapy and training and take it one day at a time.”

“Mentally and physically, I feel great. It’s just a matter of getting on the field and doing it.”

With any luck, he’ll finally get that opportunity come the fall.