The Case for Gase: How the New York Jets head coach can keep his job 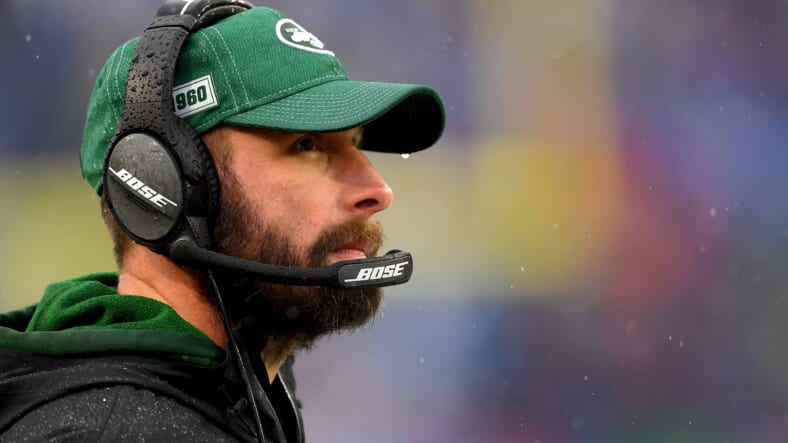 Adam Gase may have the hottest seat in football, but the embattled head coach of the New York Jets might still be able to save his job.

After his team blew yet another strong fourth quarter lead, Atlanta Falcons head coach Dan Quinn appeared to sit in the proverbial hottest seat in football.

Adam Gase and the New York Jets appeared to reply “hold our Gatorade”.

Less than two weeks after Gase was labeled an “offensive genius” by team CEO Christopher Johnson, the Jets (0-3) have endured consecutive shellackings by a combined 47-point deficit. The losses have come against a San Francisco 49ers squad missing a good portion of its starters and the Indianapolis Colts, whose ceiling likely resides on wild-card weekend. New York also ranks in the lowest portions of nearly all offensive categories, only raising the temperature on the second-year head coach.

Despite Johnson’s vote of confidence, rumors persist that the Jets may be ready to move on. Fox Sports’ host Colin Cowherd remarked during his Monday show that a source has claimed that Gase is set to be fired should the Jets fall to the Denver Broncos on Thursday night in East Rutherford (8:20 p.m. ET, NFL Network). The extended break that follows the Denver game only increases the possibility, as if the Jets’ performance over the first three weeks of the season wasn’t enough to convince anyone a change has to be made. Through three weeks, the Jets are the lone team in the NFL to hold a lead at any point this season.

Players have also spoken out against Gase’s practices, though quarterback Sam Darnold has been supportive.

New York has not fired a coach midseason since 1975, when they fired Charley Winner, who was also in the midst of his second season with the team.

The case of Gase may be too far gone, with the trigger fingers of NFL decisionmakers quicker than ever. It took the Arizona Cardinals only a single season to give up on Steve Wilks, for example. A 2016 playoff berth wasn’t enough to give Ben McAdoo a full season when the Jets’ MetLife Stadium co-tenants endured a brutal sophomore season under his watch. Thus, the invisible clock has more than likely start to tick on Gase. If they can’t beat a Denver squad sending Brett Rypien into his first NFL start, midnight will likely chime.

How can Gase stick around? ESM investigates… 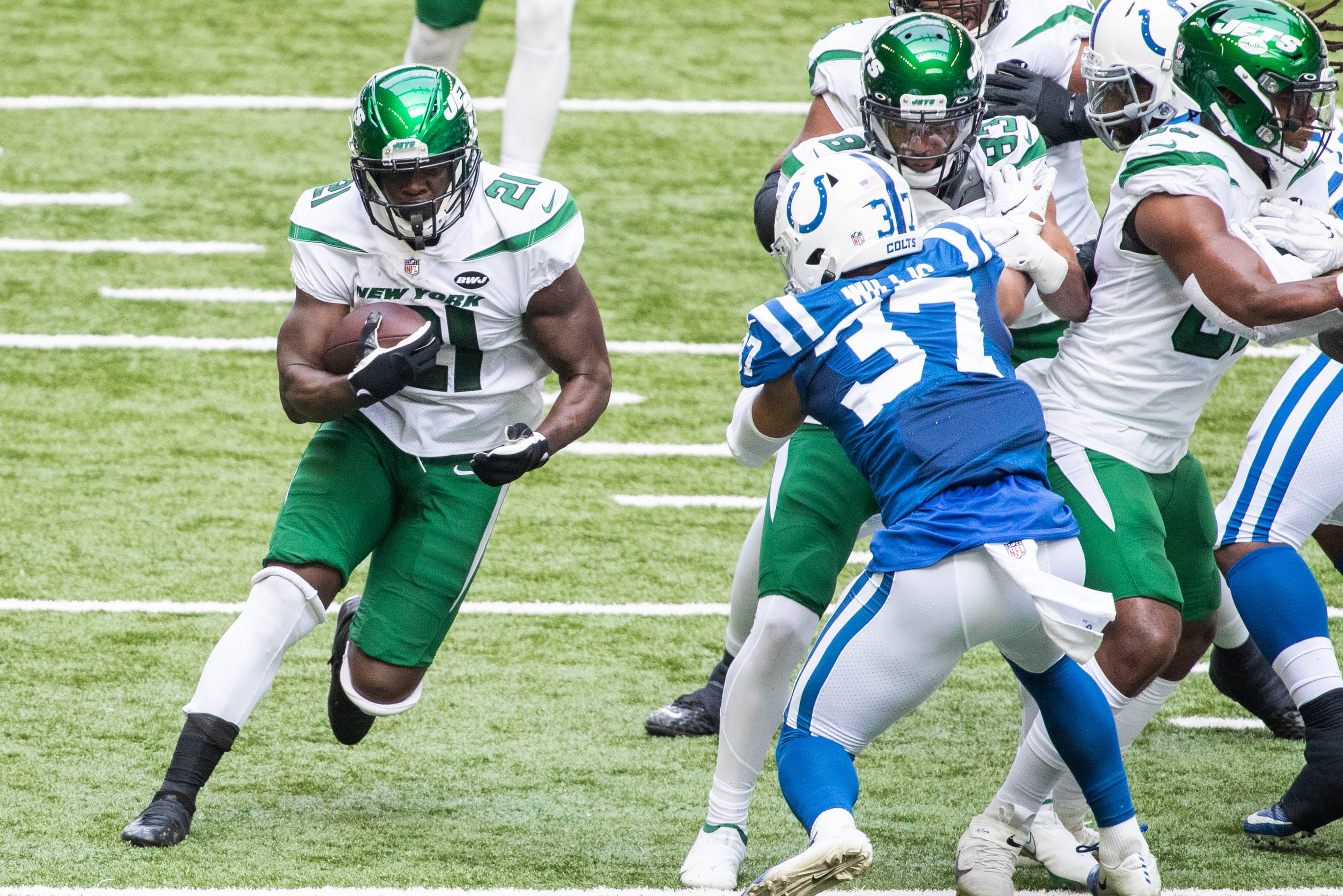 It’s admirable what Frank Gore, 37, has been able to do this late in his career. Through three weeks, Gore is second amongst running backs in their 30s with 144 yards (behind only Adrian Peterson in Detroit), though that has mostly come from an unusually high workload in the wake of Le’Veon Bell’s injury. He’s currently averaging a career-low 3.4 yards on 42 carries, 38 of which have come over the last two games.

Gore’s Florham Park prescience has a purpose. The rusher, third all-time in yardage, can still be serviceable as a spell option (1,321 yards with Miami and Buffalo over the past two seasons). A similar journey from rebuild to Super Bowl can also be inspiring to this inexperienced green squad. But Gore is no longer at a level where he can single-handedly turn games on their head. There’s no need to force a 37-year-old back into 19 carries a game, especially when you have a rookie running back that can potentially contribute.

The Jets have high hopes for La’Mical Perine, a fourth-round rushing selection. Formerly of Florida, the freshman is working with a team best 4.1 yards per carry…but, the problem is, he has only had 10 opportunities to date. Gase has continually expressed his desire to get Perine more opportunities, and it appears he’s not alone.

“Perine has been awesome. Super explosive,” Darnold said in a report from Rich Cimini. “He has ‘big play’ written all over him.”

Had we been talking about this a decade ago, sure, Gore could be the man to solve this offensive conundrum. But with this dreadful start offering the cruel silver lining of 13 research and development opportunities…basically preseason games denied by coronavirus…Gase needs to give young players an opportunity to showcase their skills. If things go well, it could work in Gase’s favor in terms of him staying, allowing him to build a rapport with young players. 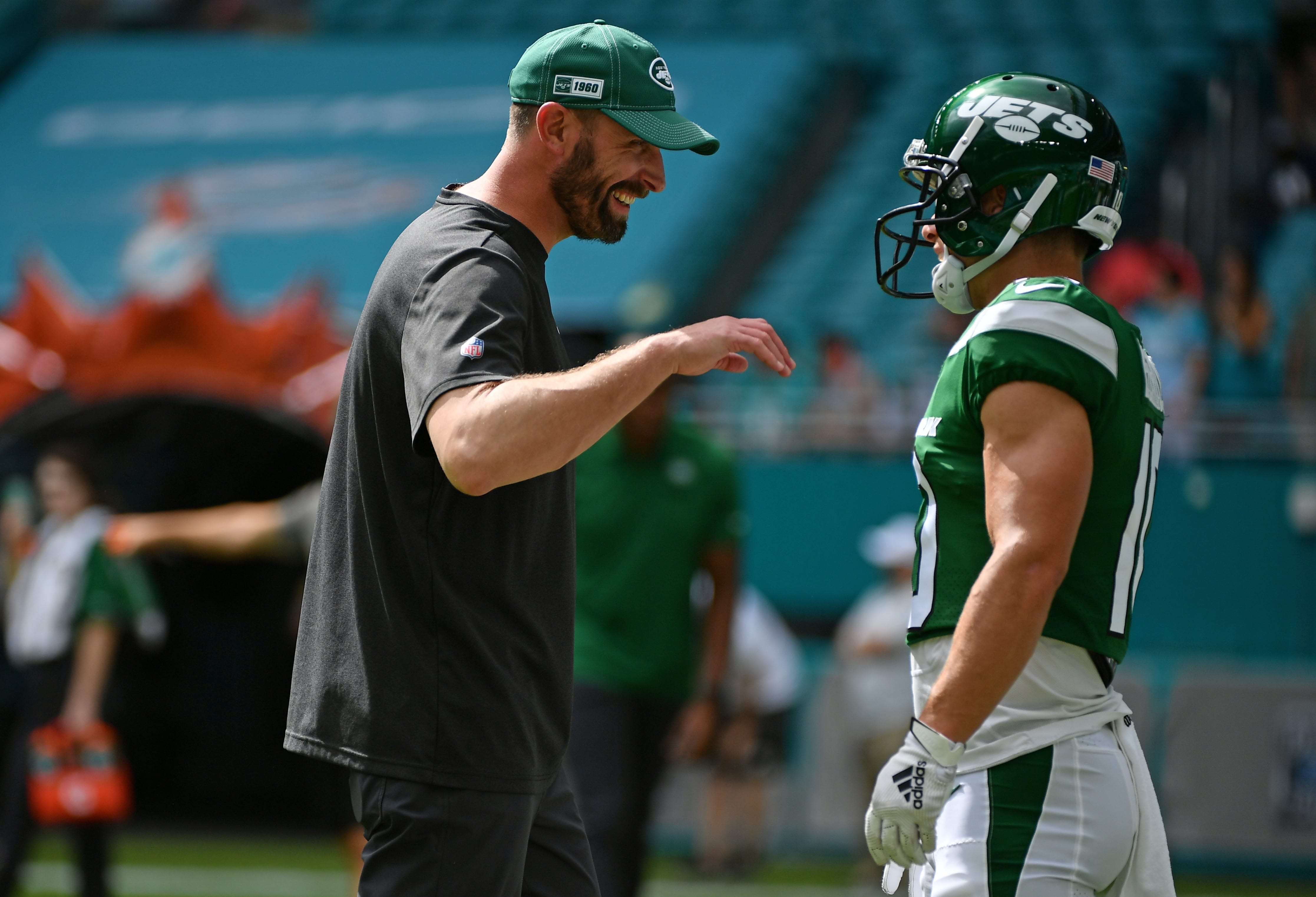 In the final verse of “Like a Rolling Stone”, arguably his most renowned work, Bob Dylan declared “when you ain’t got nothing, you got nothing to lose”.

It’s highly unlikely that Blind Boy Grunt was prophesizing the status of the 2010s/20s New York Jets, but they can learn something from that line.

Going along with the theme of the research and development silver lining, another macabre gift that the Jets have is that there is little, if any, consequence, to their remaining games. Dead last in the AFC by October’s debut, there’s simply too many teams to leapfrog and too many brutal opponents and performances to even consider the mere idea of the postseason. Thus, they should take advantage of this opportunity.

Kicking field goals down 24-3 in “goal-to-go” situations isn’t the way to do that. But that’s exactly what the Jets did in their home opener against San Francisco.

If the Jets are going to sit in the NFL cellar, the least they can do is be entertaining. By this point, there’s more or less no reason to punt once they cross their own 40-yard-line and facing fourth down with less than six yards to go (sorry, Braden Mann).

Risk-taking could play out in Gase’s favor in more ways than one. Not only could it take the advice of one of his New York predecessors (“You play to win the game!”), but it can give members of a beleaguered offense a chance to showcase their talents and allow them to audition for a role in 2021. 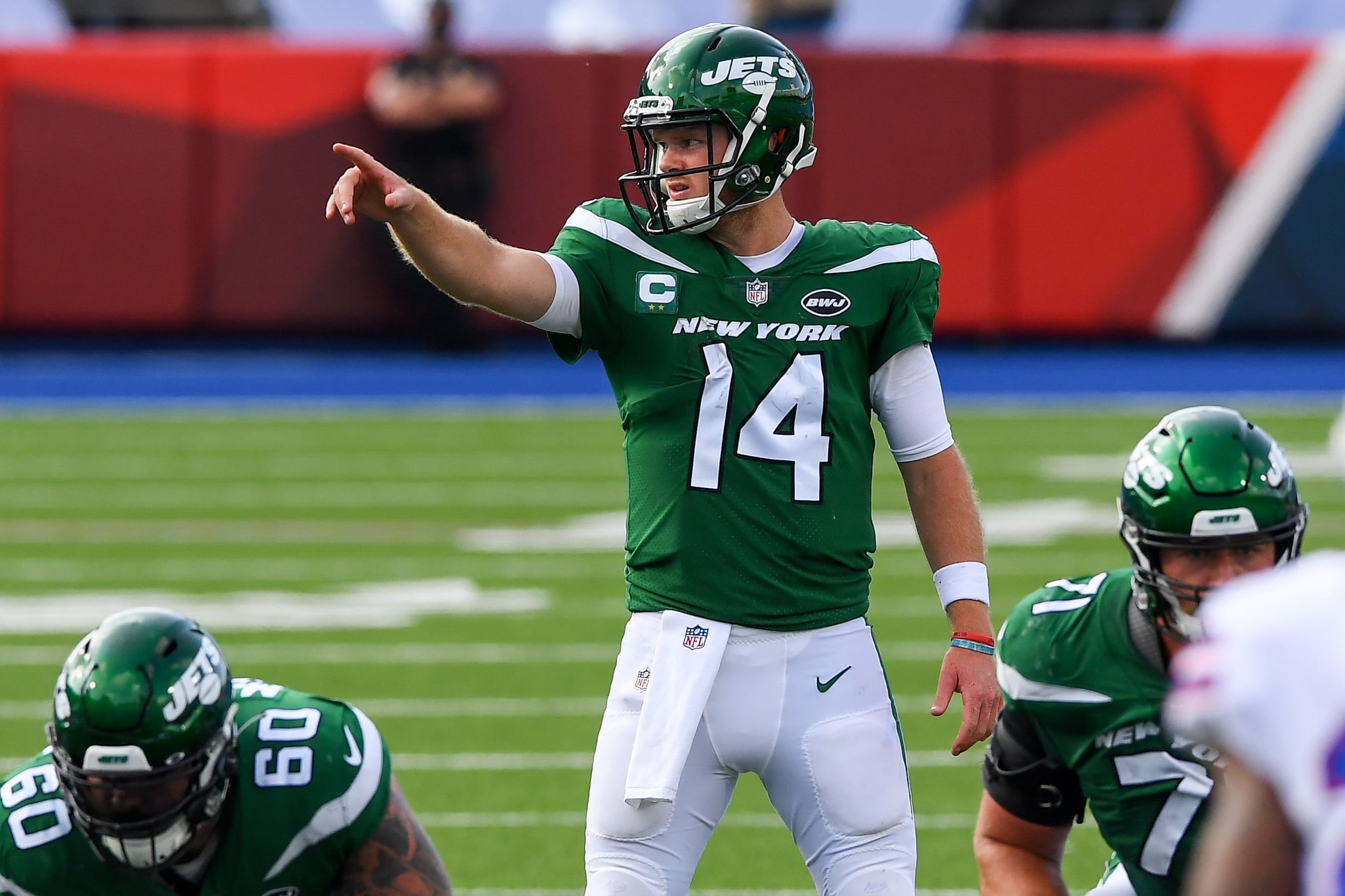 Be an Offensive Genius

All it takes to find Johnson’s “offensive genius” comments…well, offensive, is a quick glance at sortable team stats on any football stats sites.

Most of the unit’s rankings are double-digit numbers that start with a “3”…when there are 32 teams in your league, that’s never a good sign. Each of the Jets’ NFL brethren has earned more yards (791), first downs (47), and touchdowns (4) through three games. The Jets have failed to earn 300 yards in any of the opening trio, a borderline impossibility in today’s football landscape. Unless you’re a double-agent from New England, Buffalo, or Miami, nothing about that screams genius.

To save his job, Gase needs to make some progress with a young, developing offense. That starts with Sam Darnold, the franchise quarterback who’s making throws that would be concerning in a rookie season, much less a third campaign. For the first time, there’s legitimate doubt over whether he’s the man of the future for this franchise. Reestablishing that idea will be vital to Gase keeping his spot.

Gase and company are set to gain at least some reinforcements in time for the primetime showdown with the Broncos. Jamison Crowder is expected to be back, while Mekhi Becton’s injury in Indianapolis is not expected to be anything long-term. 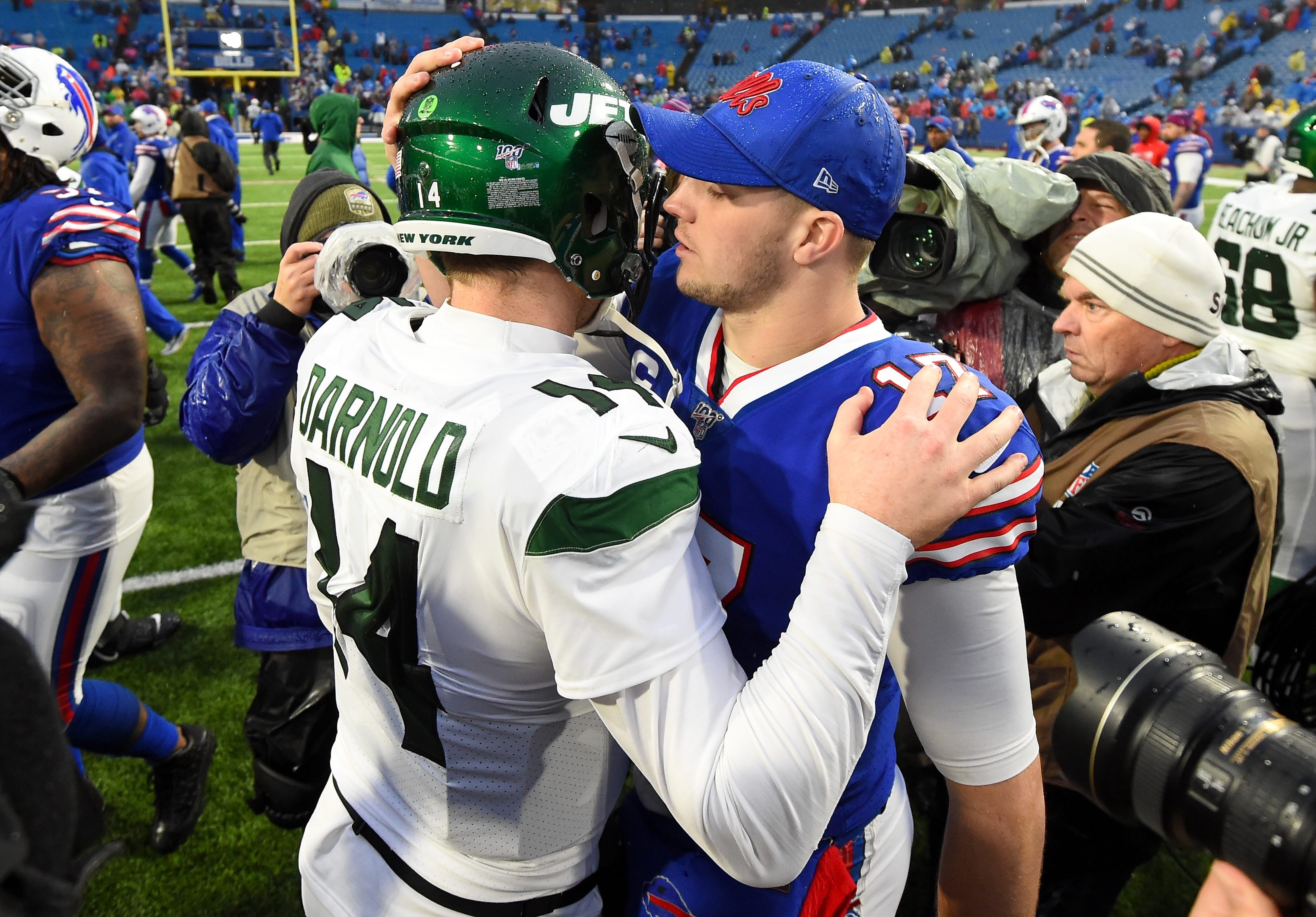 Honestly, the surest cure Gase can provide is that of victory.

The Jets posted a 7-9 ledger last season, earning their best win total since the star-crossed 2015 campaign. Those wins, almost a winning record by modern New York standards (on either side), masked a good part of the 2019 malarkey. It was enough to make many, including the Jets’ decisionmakers, apparently forget about the 1-7 start, none of those in the right column being particularly close. Gase and his comrades too advantage of a weak second half, topping Washington, Oakland, Miami, and their blue MetLife Stadium roommates. The outliers came against Pittsburgh and Buffalo. While the former was somewhat impressive, more or less ending the Steelers’ playoff chances, it came against a pair of backup quarterbacks, as did the season-ending triumph in Orchard Park with the Bills resting starters upon locking up the fifth AFC playoff seed.

Thursday’s game against Denver is the perfect storm: the Broncos come in reeling from injuries of their own. Many had pegged them as a surprise playoff contender, energized by a strong finish from then-rookie Drew Lock. However, Lock’s one of the players down (joining Courtland Sutton, Von Miller, Jurrell Casey, and A.J. Bouye), replaced first by Jeff Driskel and now Brett Rypien, he of his first NFL start…and that’s only because recent signee Blake Bortles isn’t ready. Combine that with the ten days off to prepare with a potential interim boss, and Gase’s Jets are faced with the most morbid kind of must-win.

Realistically, Thursday may be one of the final times casual observers put the Jets in the “favorite” column. November begins with a matchup against the defending champion Kansas City Chiefs, who haven’t lost a step. The Jamal Adams revenge game in Seattle awaits in December. This doesn’t even include the yearly double nightmare against New England.

Winning is going to be the best thing to help Gase right now, even if the playoffs are far removed from any New York conversation (green or blue). Heck, the Gase goose may be already cooked. But that shouldn’t stop anyone in the locker from providing even the slightest bit of metropolitan hope.