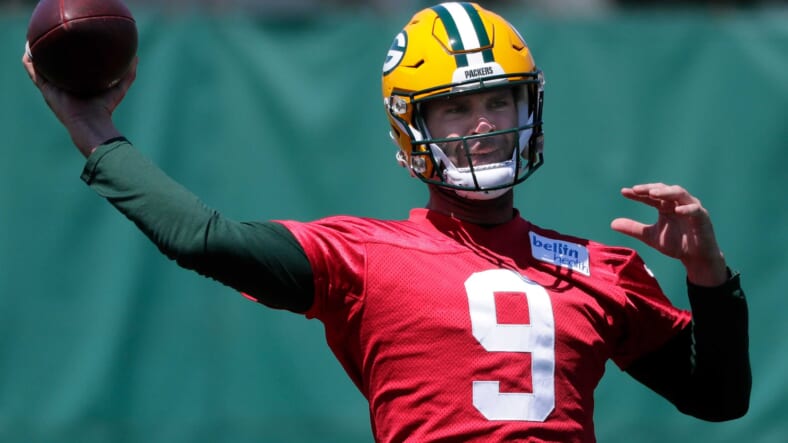 As the start of the Zach Wilson era hits a bit of a snag, Aaron Rodgers’ arrival allows the New York Jets to right a glaring wrong.

The New York Jets’ proceedings, which began Tuesday morning on One Jets Drive contain an aura of slight spookiness. Touted franchise quarterback/savior Zach Wilson has yet to report to the team, the only player on the Jets’ roster who has yet to arrive in Florham Park. Wilson, the second overall pick of last spring’s NFL Draft, is one of two first-round picks that have yet to sign with the team that drafted him, joining fellow thrower Trey Lance in San Francisco. The BYU alum’s Instagram story hinted that he is still in his home state of California as the Jets’ first camp practice looms on Wednesday.

Per ESPN’s Rich Cimini, contract offsets appear to be the point of contention between Wilson and Gang Green. Offsets offer a team relative insurance if they cut a high-profile draft pick prior to the end of his original four-year deal. A similar discussion temporarily delayed the start of the Sam Darnold era, as the previous franchise quarterback missed New York’s first three practices before inking his deal.

Head coach Robert Saleh doesn’t seem too concerned about the Wilson situation. Per notes from the Jets, he referred to the Wilson contract talks purely as “business” and that the quarterback is “intelligent” enough to make up for any lost time.

“(General manager Joe Douglas) has a great handle on everything and when it gets done, it gets done,” Saleh said. “Heâ€™s got a tremendous drive so when he does get here, I know somehow someway heâ€™ll make up for it.”

The Wilson situation, however, does give the Jets an opportunity to reflect on a rare offseason failure: with Wilson stationed on the other side of the country, the fact that the Jets’ other two rostered quarterbacks (James Morgan and Mike White) have zero NFL regular season passes between them looms larger than ever.

Saleh has never been one to panic over the backup quarterback controversy and continued to keep his cool on Tuesday. He even hinted that quarterbacks coach Rob Calabrese, who broke Boomer Esiason’s passing records at East Islip High School on Long Island, has a “live arm” and could be called upon in practice in lieu of a veteran backup.

“I do believe that (Morgan and White) got better as camp went on, the two backups, and so weâ€™ll see where theyâ€™re at come tomorrow and today for that matter, and weâ€™ll progress through and make a decision as we see fit,” Saleh said when asked if the Jets would seek veteran help. “I got a lot of faith in Joe. So, weâ€™ll see what happens here in the next couple of hours.”

Saleh’s introductory camp comments were made in the midst of the football landscape’s reshaping: nearly a thousand miles away in Wisconsin, Aaron Rodgers channeled his inner Dwight Schrute in a shirt depicting another character from The Office, Brian Baumgartner’s Kevin Malone. Rodgers temporarily lifted his shun of the Green Bay Packers and signed on for what appears one last ride in yellow and green. It sent a slight ripple throughout the football world, as the team released backup throwers Blake Bortles and Jake Dolegala.

The release of the former can help the Jets right one of the few wrongs they’ve endured this offseason.

Saleh has made it clear throughout the offseason that he’s not going to add a veteran quarterback for the sake of adding one, reasoning that teaching the Jets’ new offensive to an experienced newcomer would be no different from counseling a rookie (which makes their passing on former San Francisco understudy Nick Mullens all the more puzzling).

But the ongoing Wilson situation shows just how fragile the Jets’ current setup at quarterback is. They’re currently trapped with a questionable fourth-round pick and a 2018 day three pick that has been on and off the New York practice squad. Bortles can help a developing team like the Jets in several ways.

Even taking away the relatively cliched idea of a mentorship role…one that he briefly filled for Jared Goff with the LA Rams…Bortles can prove beneficial to New York’s future.Â Though it’s safe to say that Bortles hasn’t lived up to his third overall pick billing with Jacksonville (the first quarterback chosen in the 2014 proceedings), the 29-year-old has been serviceable enough to build a lengthy NFL career. Since 2014, Bortles has thrown 103 touchdown passes, one of 24 NFL passers to do so in that span despite minimal playing time over the last two seasons. In comparison, the Jets as a team have thrown only 137 in the last seven seasons, dead last in the league. If Wilson is befallen by an emergency…contract, injury, or otherwise…there are far worse options to install.

When Bortles’ five-year term in Jacksonville ended, then-head coach Doug Marrone didn’t buy into the idea that the Central Florida alum was a bust, despite the divorce. Instead, Marrone saw a leader who defined toughness in more ways than one.

“We as coaches always use that term and people think itâ€™s physicality of how you play the game,” Marrone said in a Bortles retrospective penned by Gene Frenette of Jacksonville.com. “Everyone can see the physical toughness, the shots heâ€™s taken, really putting himself out there. We see and appreciate that.”

“The stuff you canâ€™t see is the mental toughness,” Marrone continued. “What I remember from Blake is how he handled himself, standing up there and answering all the questions. Quarterbacks can deflect a lot of issues that occur on the field. Blake didnâ€™t do that. He took a tremendous amount of accountability, maybe more than should have been on his plate.”

Bortles’ one shining moment at the NFL level stands to be his 2017 campaign, when he helped guide the Jaguars to an improbable conference title game appearance (and, arguably, a stolen Super Bowl showing). Signing him would keep up with the theme of big game experience the Jets have created this offseason.

Two-time Super Bowl participant Tevin Coleman is slated to be their top rusher. Another ring bearer, former Philadelphia Eagles Vinny Curry, should help mentor a young front seven. The team already added one of Bortles’ 2017 teammates, receiver Keelan Cole. Fellow newcomers Corey Davis, Sheldon Rankins, and Tyler Kroft have all likewise competed in a conference title game over the last three seasons. That experience can help a team desperate for any sense of direction or positive reinforcement move forward in their quest to a postseason drought that has reached double digits.

The Jets are coming toward the end of an intriguing offseason that can be remarkably classified as macabre yet hopeful: the 2020 season was garish that almost any adjustment would’ve qualified as an improvement. Yet, there are legitimate upgrades on this roster that will help them in both immediately and in the future. Failing to add a backup quarterback was a rare shortcoming that could’ve been avoided.

Rodgers’ return sent ripples throughout the football world and offered the Jets a rare gift. They must do their best to take advantage.

How important is it for the Jets to add a veteran QB like Bortles to the fold? Follow @GeoffJMags on Twitter and keep the conversation going.