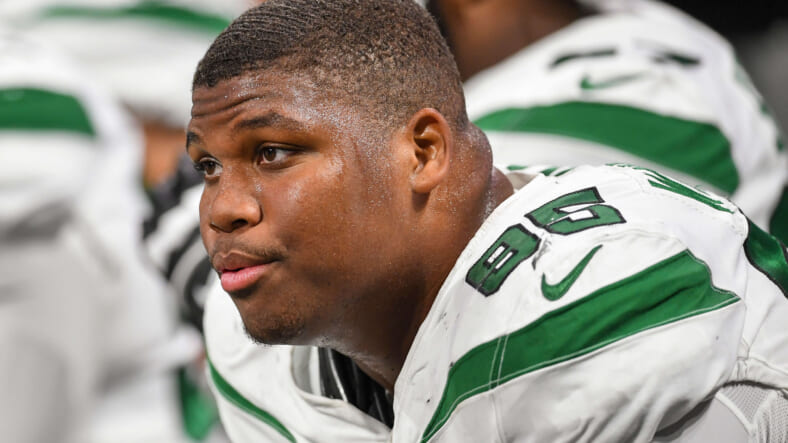 It hasn’t taken long for Quinnen Williams to rewrite the narrative of his NFL career, as the former No. 3 pick has taken huge strides.

Enough has been written about the brutality that is the 2020 New York Jets, but there are still five weeks to go in this harrowing journey, and sites and newspapers need content. If the Jets (0-11) reach the Holy Grail of imperfection, sipping Zima in perpetuity with the 2008 Detroit Lions and 2017 Cleveland Browns, the retrospectives will likely never end for football masochists.

Relief can be derived through looking on the bright side in any aspect of like. Those with time to root for the Jets likely have their health, and if the team’s imperfect destiny is the biggest problem in their lives, they probably don’t have many problems at all. But even trying to find silver linings in this mess appears to be futile, as the presumed incoming purge of both the roster and coaching staff looms, who knows who make their way onto the 2021 roster.

As a team, the Jets had relatively little to lose entering the 2020 campaign. Even if the Jets had managed to conjure up a few wins by this point, the playoffs would still likely be buried by established contenders. We’re already in a situation where two 2019 division champions, including the top seed, might miss out on the postseason. Perhaps no one could forsee the true, winless carnage that laid ahead for the Jets, but making the playoffs was always going to be a shock. It allowed them to play with a sense of reckless abandon, though they’ve rarely taken advantage of that.

But individual cases on the roster, however, were full of potential make-or-break cases right from the get-go. General manager Joe Douglas bestowed plenty of one-year deals in his first full offseason at the helm, helping create a list of 31 players up for free agency at the end of the year. That doesn’t even count the players whose contracts have 2021 outs. These cases perhaps only serve to completely dispel the notion of tanking, but that’s a conversation for another day. 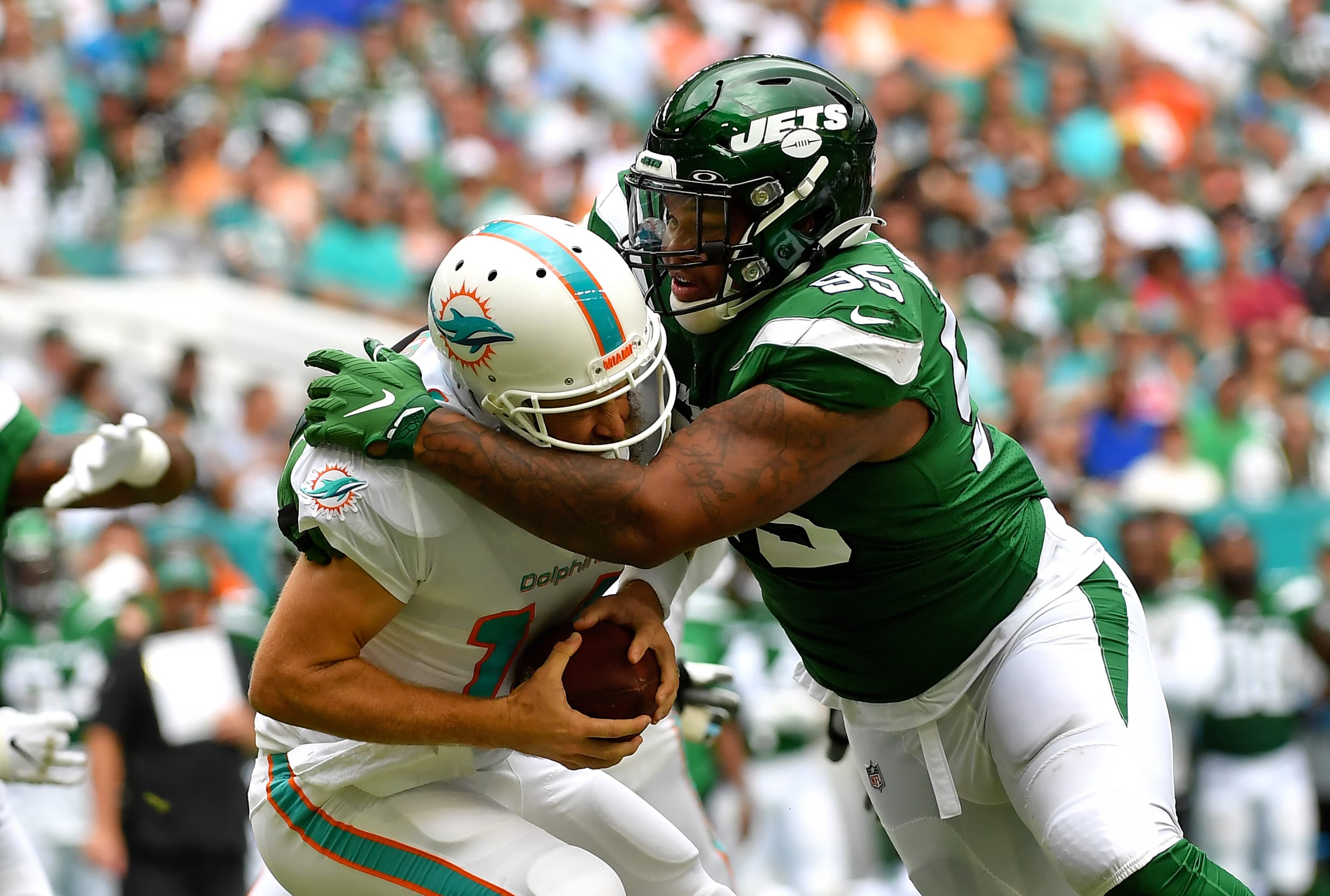 Williams’ contract situation wasn’t exactly dire. The Jets would be in for even more dead money if they tried to move him, the only potential form of cap relief coming through just over $2 million in savings if they trade him after June 1 next year (and even then, it leads to over $5 million on their dead money ledger). But the interior defensive lineman still had to prove himself during his sophomore season.

One could perhaps create a team of gridiron all-stars of the players the Jets have passed on the draft in the new century alone. With Williams going third overall out of Alabama, the Jets passed on several names packed with potential, including linebacker Josh Allen, who went to the Jacksonville Jaguars at the seventh. While Allen enjoyed a Pro Bowl campaign, Williams struggled to the tune of 28 tackles (four for a loss), 2.5 sacks, and a single pass defense over 13 games, losing parts of the season to a high ankle injury. It didn’t help that the only two men chosen in from of Williams were a new franchise quarterback (Kyler Murray) and a future Rookie of the Year who helped fuel a Super Bowl run (Nick Bosa), nor did Williams’ arrest on a gun charge at LaGuardia Airport in March (though charges were later dropped).

It was fair and perfectly natural for Williams to be worried. After all, the networks that broadcast the draft have turned roasting the Jets’ prior picks into more of a draft tradition than big boards and Mr. Irrelevant combined. Additionally, the already-quick trigger-fingers of NFL general managers have become even more aggressive. But of all the skills Williams learned in the football Valhalla of Tuscaloosa, the means of fighting through adversity might’ve been the lesson that he’ll remember most from his time with the Crimson Tide.

“I played for Alabama, a lot of people hate Alabama,â€ Williams said toward the end of last season, per Andy Vazquez of NorthJersey.com. â€œA lot of people criticize Alabama. I lost to Auburn, lost in the National Championship. So you get criticism all the time, man. But youâ€™ve got to know who you are. Youâ€™ve got to know that the person who criticizes you donâ€™t know Xs and Os the way you know Xs and Os.â€

This offseason was a game-changer for Williams, setting the stage for his breakout campaign. Denied an opportunity to train at game speed with the preseason wiped out, he instead made an effort to improve in areas away from the field: the practice facility, the weight room, and the community.

Williams underwent an intensive body transformation during the offseason, seeking to eliminate body fat. He returned to Florham Park nearly ten pounds lighter when training camp commenced. In the meantime, he found a way to take care of a different brand of metropolitan defender: first responders battling the ongoing health crisis. Williams donated over $25,000 worth of meals to different hospitals to New Jersey healthcare workers.Â

Defensive coordinator Gregg Williams was convinced that his protege was ready to take the next step in his professional football.

â€œPeople are going to see a big jump in his production and in his play,â€ coach Williams told SNY in June. â€œHeâ€™s had a very good offseason in how heâ€™s trained and what heâ€™s done to get better.”

Williams’ offseason progress has impossible to miss on game day. He has already set new career-highs in nearly every traditional defensive stat, earning 41 tackles and five sacks. Next Gen Stats noted that, during the Jets’ most recent defeat at the hands of the Miami Dolphins on Sunday, Williams earned single-game bests for quarterback pressures with six (his third game of having at least five this season) and a pressure rate of 18.8 percent. The offense was unable to capitalize, but Williams also forced a fumble recovered in Miami territory in the 20-3 defeat.

Quinnen Williams causes the fumble & Harvey Langi gets the recovery! That’s how the D should look! ??????#Jets | #TakeFlight | #MIAvsNYJ | @QuinnenWilliams

So much uncertainty surrounds the Jets in the near future, as this woebegone campaign has completely diluted one of the more legitimately hopeful periods in this perpetual rebuild. Things aren’t going to magically improve with the inevitable top overall pick. Looking for positives may seem like a futile cause, but they could provide building blocks for the eventual foundation that will one day hopefully lift the Jets out of this rut.

A win may not appear on the left side of the Jets’ standings column this season…but Williams is providing one in the proverbial sense, the video archive department of the networks that broadcast the draft be damned.

Williams and the Jets return to action on Sunday afternoon, taking on the Las Vegas Raiders (1 p.m. ET, CBS).