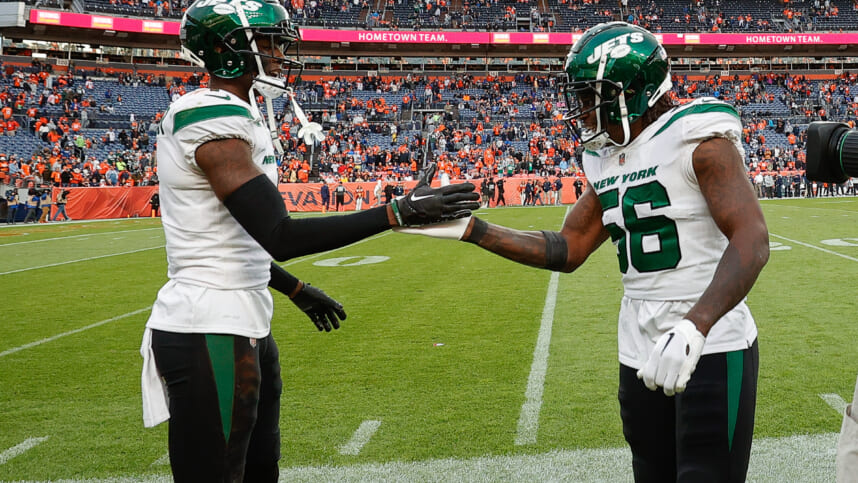 One of the main components of the terrific start to the 2022 New York Jets season is the strong play of the defense. Through seven games, the unit ranks 10th overall, allowing 314.7 yards per game. It is a group that consists of talent and depth on all three levels. From there, the players are executing in sync, proving to be a balanced unit across the board.

Starting on the ground, the unit is 11th in football, allowing 105.3 yards a game. From there, the pass defense is currently 13th giving up 209.4 yards per game. The success against both the run and pass leads to fewer points allowed. When it comes to scoring, the Jets’ defense is tied for 10th, giving up 19.6 points per game.

The unit has so many players playing on a reputable level that 15 players are worth highlighting. A few of these individuals are playing elite ball at the top of their respective position across the NFL.

Brandin Echols has firmly established himself as the Jets’ fourth cornerback. Not only that, but he has proven himself to be a versatile asset to the Jets. Last year, he played on the outside at corner. This year, he has been a key special teams contributor in punt coverage as a gunner, using his 4.3 speed.

On defense this year, he sporadically comes in when the Jets go to dime packages, mainly on third down. His role over the last three weeks has increased. Echols matches up in the slot on tight ends and holds his own. He has two passes defended in 32 snaps this year.

The Jets’ first-round edge defender has proven his talent in the five games he has played. Each week, Jermaine Johnson had made plays against the run. His speed, power, and bend have been on display on his effective pass rush reps. Johnson has 1.5 sacks in 98 snaps played.

Over the Jets’ four-game winning streak, Lamarcus Joyner has played a key part in five turnovers. He has picked up three interceptions (tied for third-most). Joyner has not missed a snap all year for the Jets.

One of the underrated aspects along the way to the Jets’ four-consecutive wins is the pass rush presence Bryce Huff has provided. He predominately works his way into the defensive line rotations with his third-down role. Huff has a fast first step get off with great closing speed. He has 0.5 sack, and four quarterback hits in four games (65 snaps).

Jordan Whitehead had provided the Jets’ defense with the needed physical presence he provides as a strong safety. He is fast and aggressive in his pursuit downhill which in turn makes his impact felt at the point of contact. Whitehead has played 99% of the Jets’ defensive snaps. He has 37 total tackles (one for loss), four passes defended, and an interception.

The summer signing of Kwon Alexander has played a crucial part in this defense’s success. Similar to Whitehead, he makes his presence felt with the energy he plays with. Alexander offers a ton of speed and physicality to the second level of the Jets unit defensively.

This group has so much talent that, somehow, Carl Lawson is ranked ninth. From four through nine on this list, these players are all so close.

With Lawson, he has tallied three sacks so far this year, 2.5 have come over the four-game winning streak. Lawson had a ridiculous seven quarterback hits in the Week 5 win. He has 15 total quarterback hits this year. His 29 pressures currently rank Lawson fourth in football among edge defenders.

Potentially no player has improved more this year than Quincy Williams. Cutting out the mental mistakes, Williams’ natural ability with speed, tackling power, and playing intensity have taken over. Two weeks ago, he tallied a total of 14 tackles.

Along with Williams, Sheldon Rankins has also taken his game to a much greater level this year for the Jets. Whether it be stopping the run or getting after the quarterback, Rankins has been a key contributor. Rankins has two sacks, three tackles for loss, and four quarterback hits.

The veteran leader of this top defense is C.J. Mosley. Right in the middle, he gives the Jets a tackling machine with tons of intelligence. He has at least 11 tackles in five games. He is fourth in the NFL with 70 total. Mosley has been on the field every snap of 2022 for the Jets’ defense.

Quite possibly, the Jets’ most underrated player is Michael Carter II. In the slot corner position, Carter has established himself as one of the best at the position across the league. His 4.3 speed enables him to cover well. He has 22 tackles (one for loss). Most importantly, the area for growth in year two for Carter has been making plays on the ball, which he has. Carter’s picked off one pass and broken up three.

Up front, John Franklin-Myers provides the Jets with inside-out versatility. So far this year, Franklin-Myers has 1.5 sacks, eight quarterback hits, and two tackles for loss. He gives the Jets proven pass-rushing ability.

The prime free agency signing for this defense has paid off. DJ Reed has played at an extraordinary level. He has played 100% of the snaps this year, has one interception, and five passes defended, three came last Sunday. Lastly, Reed’s sound tackling has consistently been on display.

Sauce Gardner is playing as well as any cornerback in the game right now. He has lifted the Jets up dramatically. Gardner has had at least one pass defended in every game this year. His 12 total passes defended are the best in football. Gardner has one interception as well.

Quinnen Williams, along with Gardner, is playing at a premier level. He has five sacks, which puts him on pace for 12. Williams has 13 quarterback hits. He has 29 total pressures (4.1 per game). No other defensive tackle has more than 25 pressures currently. Williams is on pace for a tremendous total of 70 pressures this year.