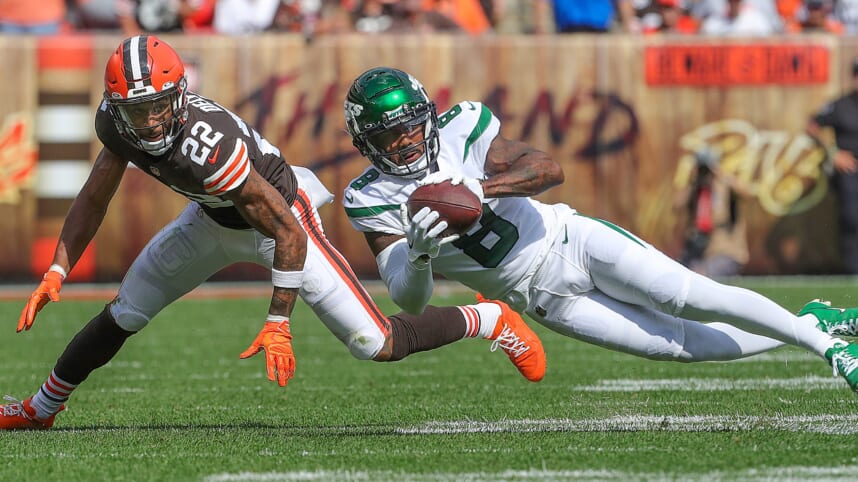 Riding high off of a thrilling comeback victory on the road, the New York Jets now turn their attention to the defending AFC Champion, Cincinnati Bengals.

Even though the Bengals are 0-2, their two losses have both been by three points on the final play of each game. While this game is at MetLife Stadium and Jets Nation will make a loud difference, this game will still be a challenge going up against a Joe Burrow-led team.

One key to the Jets winning this game is getting Elijah Moore going in a big way.

Throughout the first two games, Moore has delivered when given opportunities. That said, those chances have been less than one would anticipate from the talented 22-year-old wide receiver.

In total, Moore has accumulated 136 snaps and seen just 12 targets. He has eight catches for 90 yards. For the Jets offense to remain efficient, scoring around 30 points a game like they did in Cleveland Sunday, Moore needs more of a role. And come the third game of this year, expect that to be the case.

Why Elijah Moore will have a big Week 3 for the New York Jets:

There are a few reasons, three, in particular, to believe that Moore is on the cusp of just a dominant, breakthrough game propelling the Jets offense.

Those three being that Moore has been open and the ball has just not found him, Garrett Wilson may garner some more attention following his exceptional Week 2 outing, and the Bengals will likely play a chunk of man coverage, particularly cover-1 man.

Starting on the point with Moore getting open and just not being targeted, it was the case in Week 2.

Obviously, the Jets got an awesome performance from Wilson, a big clutch play from Corey Davis, and consistent opportunities for Tyler Conklin and Michael Carter.

It then leads to the point of Moore getting opportunities to flourish against the Bengals man coverages in Cover-1. Moore will see a lot of Chidobe Awuzie and Eli Apple in 1-on-1 on the outside.

Expect him to continue creating easy separation for himself. Only this week it showing up on the stat sheet for people to see.

Ultimately, what is nice is that the Jets have a very balanced, deep group of skill position players. Whether it be in the backfield with Breece Hall and Michael Carter. Out wide, the Jets have a terrific collection of talent with Moore, Wilson, Davis, and Braxton Berrios. At tight end, Conklin and CJ Uzomah.

The ball will likely be spread around in this offense week to week. It is worth noting Moore has given the Jets effort and solid contributions as a blocker when he has not had the football.

This week should be just the start of Moore’s excellence when it comes to receiving production. In Week 3, Moore should constantly be targeted throughout the game, with roughly 10 total. He is a great route runner with reliable hands, along with the speed and quickness to separate. This should be a game Moore has six to eight catches for nearly 100 yards, highlighted by a big explosive play or two. Moore is an integral player to the Jets, and a big game is coming.