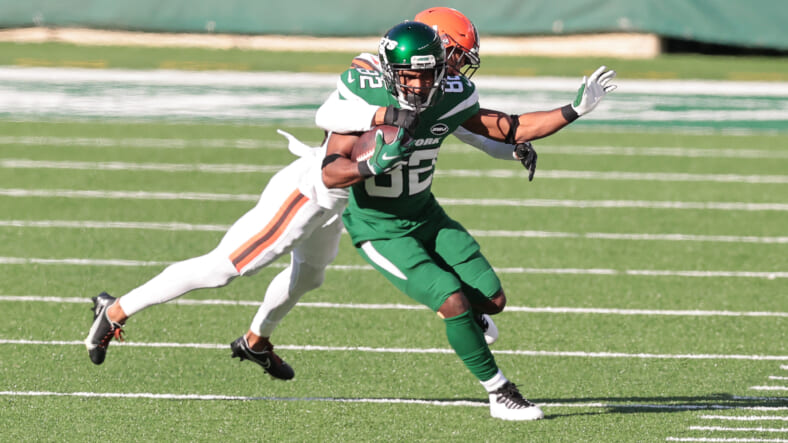 Crowder’s status for the New York Jets’ opener on Sept. 12 in Carolina likely comes down to his vaccination status.

It’s believed this is an isolated case. But Crowder is going on the COVID list and his status is now up in the air for the Week 1 opener against the #Panthers.

Crowder, set to enter his third season in green, had not appeared in any practices this week. Head coach Robert Saleh said he was dealing with a groin issue and was labeled day-to-day, per notes from the Jets. The Jets reportedly believed that Crowder’s diagnosis is an isolated incident.

With just over a week before the Jets’ season opener against the Carolina Panthers on Sept. 12 (1 p.m. ET, CBS), Crowder’s kickoff weekend status will come down to his vaccination status. NFL health policies introduced this season have incentivized vaccinations. If an unvaccinated player tests positive, they must sit out a minimum of 10 days before return to the team. Vaccinated players, on the other hand, can be welcomed back to team activities with two negative tests in a 24-hour span.

Crowder is the Jets’ top returning receiver and has likely been the team’s most consistent offensive weapon over the last two seasons (137 receptions, 1,512 yards, 12 touchdowns). Formerly of Washington, Crowder restructured the final season of a three-year deal inked in 2019 this summer. It’s an adjustment that sliced his $10 million base salary in half but now centers on guaranteed money ($4.5 million).

The Duke alum played sparingly in the preseason, earning only a single four-yard reception. He is nonetheless expected to reprise his role in the slot alongside a revamped New York receiving corps. The Jets welcomed in Corey Davis and Keelan Cole through free agency and drafted Elijah Moore in the second round of April’s draft. Crowder is joined by fellow active roster returnees Denzel Mims and Braxton Berrios.