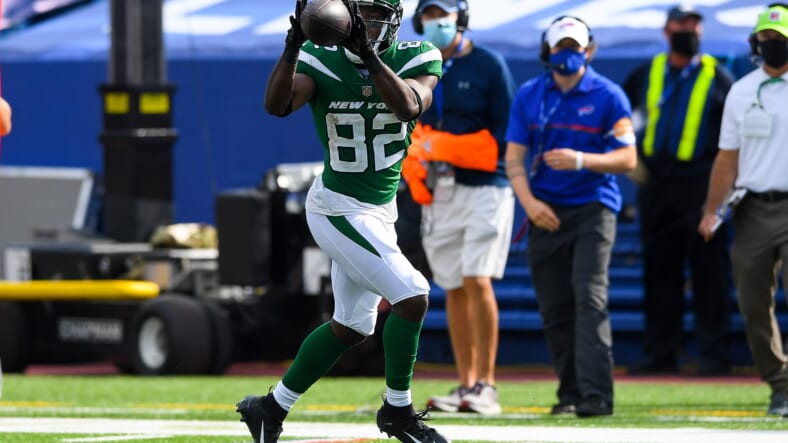 The New York Jets’ most potent offensive weapon from the last two seasons will be available for the team’s home opener against New England.

JAMISON CROWDER TO THE HOUSE!

The New York Jets announced the activation of receiver Jamison Crowder from the COVID-19 list on Thursday. Crowder will be available to partake in the Jets’ Week 2 contest, their home opener against the New England Patriots (1 p.m. ET, CBS).

Former of Washington, Crowder is set to enter his third season with the Jets. In that span, he has developed into one of the league’s most reliable slot receivers. He has been the team’s most consistent offensive producer over the last two seasons, earning 1,532 yards on 137 receptions, 12 of which went for touchdowns. Each of those marks is good for a team-high over the last two seasons.

Crowder inked a three-year, $28.5 million deal in March 2019. He restructured his deal over this offseason, one centered around a $4.5 million guaranteed salary. The Duke alum was on the reserve list after testing positive on September 3.

The Jets (0-1) were without two of their top receivers during their season opener on Sunday, a 19-14 loss to the Carolina Panthers. Keelan Cole, who was acquired from Jacksonville over the most recent offseason, missed the contest with a knee injury and has been limited in practice this week. Zach Wilson threw for 258 yards in Sunday’s defeat, while Corey Davis paced the team with 97 yards on seven receptions. Braxton Berrios (5 receptions, 51 yards) took over Crowder’s duties in the slot.

“Those guys do things the right way,” Saleh said of Cole and Crowder, per ESPN’s Rich Cimini. “They’re where they’re supposed to be. They’re all gas 100% of the time. They’re reliable. For a quarterback, you can’t ask for much more than that. To have two more options on the field for the quarterback is priceless.”