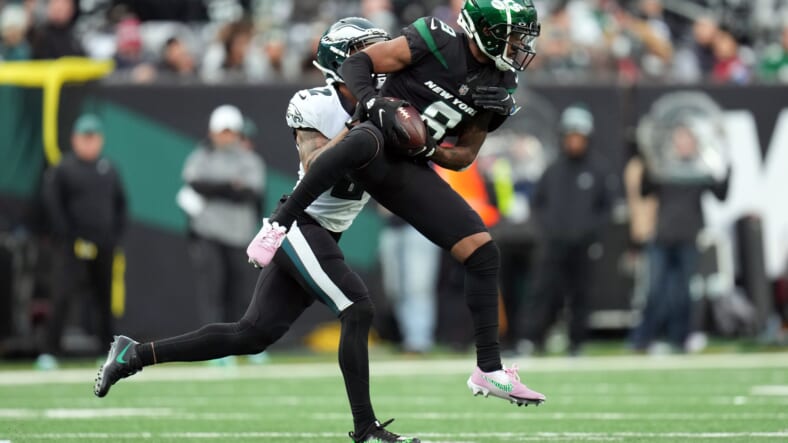 29. Jets (29): Need a reason to smile, NYJ fans? Rookie WR Elijah Moore looks like a keeper, amassing 28 catches for 392 yards and five TDs in the past five games. Syndication The Record

For the first time in a while, New York Jets second-year wide receiver Elijah Moore met with the media. After yesterday’s game, a day in which Moore played just 10 snaps, he spoke with reporters. As one would expect, all of the conversations had to do with his well-documented recent status with the team, which led to a trade request.

Moore was asked about his current relationship with the Jets, offensive coordinator Mike LaFleur, and quarterback Zach Wilson. His comments only fueled more and more speculation about his future with the team.

When asked about his chemistry with Wilson on the field, Moore made one fairly loud statement that went viral.

On why he ultimately requested a trade from the Jets, Moore said:

“There’s a lot of things behind the scenes I’d rather keep inside.”

Could New York Jets WR Elijah Moore be on his way out?

These comments are certainly not great to hear. His body language, facial expressions, and tone of voice in yesterday’s interview were somewhat telling. And it has led to the big question, could he be moved by tomorrow afternoon’s trade deadline?

While Robert Saleh has publicly shot down there being any chance of Moore getting traded, the comments made by the wide receiver yesterday could possibly change things from the Jets’ view.

Ultimately, it is hard to definitively say either way if Moore will be traded or remain a Jet. But the point following yesterday’s comments is fair, the chances probably did increase that he could be moved after some poor statements.

It would be frustrating to see an early second-round pick from a year and a half ago moved. On the other hand, could Moore just become an even bigger, louder off-field issue if he remains with the Jets? It will be fascinating to see if anything happens with Moore over the next 24 hours.