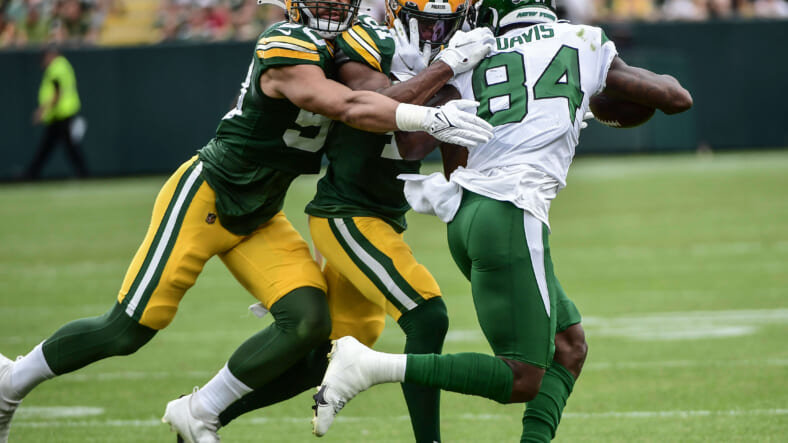 Davis is a surprise entry to the New York Jets’ ever-expanding injury report and likely won’t play on Sunday against Cincinnati.

A gargantuan task for the New York Jets has somehow become even more of a chore.

Top receiver Corey Davis is set to miss this weekend’s contest against the Cincinnati Bengals with a hip flexor injury sustained in Thursday’s practice. Head coach Robert Saleh revealed the extent of Davis’ injury during his Friday availability.

Davis, working through his first year with the Jets, leads the team in nearly all major receiving categories after six games. The former Tennessee Titan has scored four of the five aerial touchdowns the Jets (1-5) have earned this season and has also earned 349 yards on 24 receptions.

With Davis potentially out for Sunday’s visit from Cincinnati (1 p.m. ET, CBS), Saleh hinted that Denzel Mims could finally earn an extended opportunity in the receiving rotation.

“(Davis) is a stud,” Saleh said. “But (the injury) gives Denzel Mims an opportunity to step into that Z role and along with the rotation that we have with Elijah (Moore) and Keelan Cole, so it gives guys opportunities to step up.”

While there’s a glimmer of hope that Davis could be available on Sunday, Saleh ruled rusher Tevin Coleman, linebacker Bryce Huff, and tight end Trevon Wesco out. Huff’s fellow linebacker Jarrad Davis, on the other hand, is set to make his New York debut after spending all of this season on injured reserve, though Saleh hinted he could be on a limited snap count.

“He hasn’t played in a while, so we got to be able to spell him,” Saleh said of the former Lion’s availability. “Quincy (Williams) is going to return from concussion protocol, so we feel good about that. So, weâ€™ll be able to get him at least some reps in there to give JD a break.”