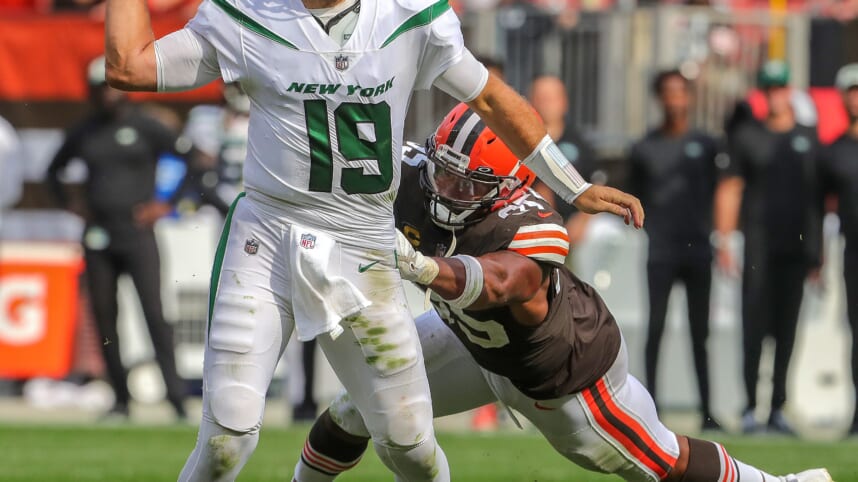 What a win. Down 13 with 1:30 to go, the New York Jets proved incredible grit. To find a way to come from behind and pick up a needed victory, to say the least, was as exciting as it has been for Jets fans in quite some time.

This 31-30 thriller on the road against the Cleveland Browns gives the Jets their first win in September since 2018.

Today’s game was one in which the Jets were competitive and efficient offensively for the most part but were never in full control. After Nick Chubb walked in for a touchdown with under two minutes to go, he made it a two-score game. Even with the missed extra point, things could still not look more bleak for the Jets.

Instead, the Jets showed no quit. On just the second play of the following drive, Joe Flacco connected with Corey Davis on a big play that immediately cut the game to 30-24.

Then, somehow, Will Parks recovered the attempted onside kick for the Jets near their sideline with 1:22 to go. At that point, there was no doubt the Jets were going to go down and score.

Flacco started the game-winning drive with three underneath completions, two to Michael Carter and one to Tyler Conklin.

Then, to get the Jets in the red zone with under a minute to go, Flacco connected with the star of the day, rookie wide receiver Garrett Wilson.

Following two incompletions, on 3rd & 10, Flacco threw a quick post route in-stride to Wilson over the middle to give the Jets the game-tying touchdown with 22 seconds to go.

Greg Zuerlein gave the Jets the 31-30 lead with the extra point. Zuerlein delivered for the Jets today as he went 4-for-4 on extra points and made a crucial 57-yard field goal.

To close the game, the Jets’ defense needed to hold strong and finish with 22 seconds left.

After allowing a big 21-yard run to Jacoby Brissett, the Browns had it at their own 46, nearing field goal territory.

With 13 seconds of play left, the Browns were looking for their top receiver as they had been all day. On a deep in route for Amari Cooper right near field-goal territory, Ashtyn Davis made the play to win it for the Jets as he jumped in front of the pass and recorded a game-winning interception.

This game was an exciting, big win that the Jets needed to have. They undeniably fought until the finish, regardless of the circumstances. This is one for the Jets to enjoy. Hopefully, the team builds on this thrilling win as we progress through the 2022 season.