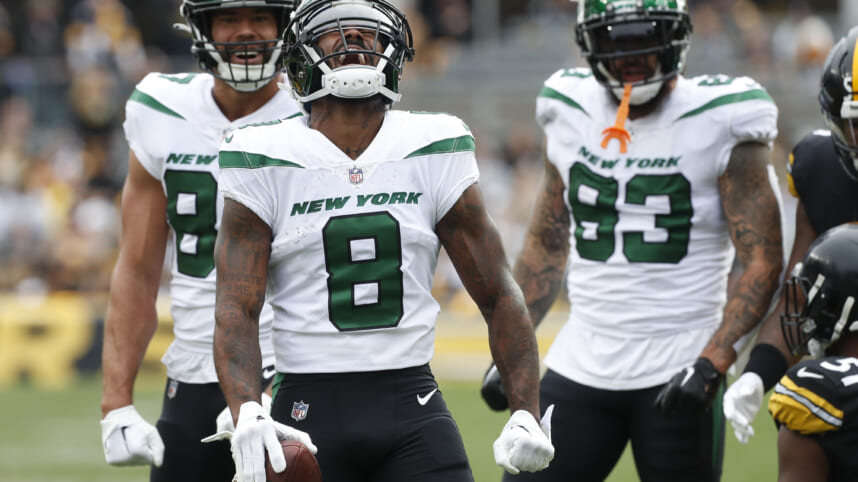 For the first time since 2017, the New York Jets are 2-2. Their second win of the 2022 season was yet another last-second come-from-behind victory on the road in which they trailed by two scores late into the fourth quarter.

The resiliency of this Jets football team was evident. They beat themselves far too much in the first three quarters. But when it mattered most, they stepped up and made big plays.

In his first start of 2022, Zach Wilson had a fast first quarter. The offense scored 10 points early. Wilson himself caught a touchdown on a well-designed trick play by Mike LaFleur. He did run into some problems in the second and third quarter, though, with turnovers, inaccuracy, and some rough decisions. However, when it mattered most, Wilson stepped up and showed what type of quarterback he can be for the Jets.

En route to the last-minute comeback, Wilson went 10-for-12 with 147 yards and a touchdown and 5-for-5 for 57 yards on the last drive. He made clutch throws and kept drives alive throughout the fourth.

The top four passing targets all made their impact. Elijah Moore got things going early. Tyler Conklin was involved throughout. Garrett Wilson gave the offense a huge 35-yard play down 10 late. Lastly, Corey Davis battled and made clutch plays with tough catch after tough catch over the middle and had a touchdown helping lead the Jets to their comeback win.

The offensive line hung in there well, giving Wilson time. Alijah Vera-Tucker surprisingly made the start at left tackle and did great. Max Mitchell, unfortunately, had to leave the game with a knee injury. It led to Conor McDermott filling in, and he stepped up.

Finally, the defense of the Jets had a terrific outing. They generated turnovers all game, four total. Lamarcus Joyner deserves a game ball. He deflected four passes and played a part in three of the turnovers created and sealed it on the last play. Sauce Gardner in position and Michael Carter making a play on the ball both contributed to a late interception that started the Jets’ game-winning drive late in the fourth.

Up front, Carl Lawson, Quinnen Williams, and Jermaine Johnson all had a sack, and some impact rushes throughout the ball game. All in all, the Jets’ defense held the Steelers to just 297 yards of offense.

Lastly, rookie Breece Hall showed how clutch he can be in just his fourth NFL game with the Jets. LaFleur put the game on his shoulders late. He responded with some timely, big runs in the fourth quarter. Hall scored the game-winning touchdown and finished with 66 yards on the ground, along with 12 receiving.

All in all, this was one the Jets needed to have, and they found a way. The team showed for the second time early in the year to never count them out as they will battle until the finish. Now, the Jets are 2-2 and coming back home again next week with a chance to have a winning record.