New York Jets: Why Tevin Coleman is the most impactful pick-up yet 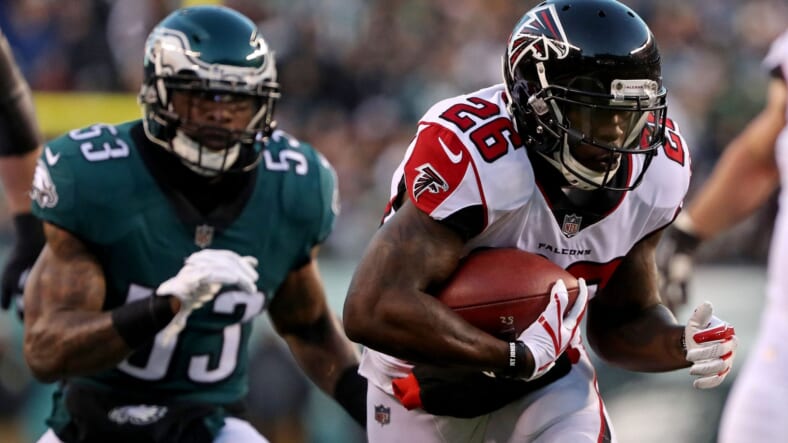 The New York Jets have made some intriguing moves this offseason, but none may be more vital than welcoming in Tevin Coleman.

The New York Jets look drastically different than they do from this time last year, but Robert Saleh made things a little more familiar on Wednesday.

Per Ian Rapoport of NFL Network, the Saleh and the Jets are finally tapping into the new head coach’s former potential from his former Bay Area stomping grounds by adding running back Tevin Coleman. The former Indiana Hoosier spent the past two seasons navigating his way through Saleh’s defenses in San Francisco and worked extensively with offensive coordinator Mike LaFleur, then the 49ers’ passing game coordinator.

After a slow start, the Jets have made several moves to propel themselves in a positive direction this offseason. Carl Lawson should help a slow pass rush while aerial weaponry has been added through Corey Davis and Keelan Cole. Further veteran defensive help has been provided through both Sheldon Rankins and Coleman’s fellow Wednesday signee Vinny Curry.

But, to build toward the vision that Saleh and LaFleur are building towards, the arrival of Coleman might be the biggest move yet.

After the Le’Veon Bell situation, it’s going to a long, long time before the Jets shell out big bucks for another running back. The offseason surplus might’ve given Joe Douglas and Co. some wiggle room in terms of extra spending, investing high numbers into a running back hasn’t paid off. Of the 10 highest-paid running backs in football last season, only two (Derrick Henry and Mark Ingram) appeared in January’s playoffs. The highest-paid back on the defending champion Tampa Bay Buccaneers was Ronald Jones, who was a sub-$2 million cap hit last season. By the time the Super Bowl trek started, he was sharing carries with in-season find Leonard Fournette.

Coleman’s coming off a year where was the 11th-highest-paid rusher in football. Going into the new year, he’ll be a mere $1.1 million cap hit in a deal where he’ll be eager to reprove his NFL worth. Meanwhile, the Jets get a ridiculously affordable back who has tasted success at the highest levels to headline their revamped rushing game. Coleman gets a chance to take on a new opportunity. On such an affordable deal, it comes at little, maybe even no, risk to the Jets.

Haven’t We Done This Before?

Defying the expectations of many offseason prognosticators, the Jets have opted not to load their roster with free agents from Robert Saleh and Mike LaFleur’s old Bay Area stomping grounds. But, if they were to add anyone from the most recent addition of the 49ers, Coleman was likely among their best options. For a team so desperate for offensive weaponry, adding a rusher that can put up numbers on the ground through the air is an absolute must.

“He can run and he’s explosive, no doubt. The thing that really sticks out with Tevin is how fearless and physical this guy is. He is a man out there,” LaFleur said. “When you tell him to put his foot in the ground and go north and south, he’s going to do it times 10. It’s every single week. It’s every single down. You’re always getting the same guy. â€¦ When we need him to get us a yard, he’s going to get us a yard every single time.”

Coleman wound up getting some big yards in San Francisco’s journey to Super Bowl LIV. Anytime you’re in the same sentence as Jerry Rice is a celebratory cause, especially in a 49ers setting. Coleman joined such hallowed ground by becoming the first Niner since Rice to score four touchdowns in a single game since the legendary No. 80. He also put up 105 yards and two scores in the Divisional round triumph over Minnesota, becoming the first 49er to tally triple digits in a playoff game since Colin Kaepernick in 2014. It’s the type of playmaking the Jets desperately need in an anemic offense.

Inconsequential as it may seem, the Jets could use some championship pedigree in their roster as they seek to get the rebuild back on track. That endeavor was seen on defense through Vinny Curry and continues with Coleman, who also partook in the Atlanta Faclons’ ill-fated visit to Super Bowl LI.

While each member of their returning rushing corps (La’mical Perine, Ty Johnson, the newly re-signed Josh Adams) had flashes of brilliance last season, they lack the experience to truly invoke confidence. Through Coleman, the group now has a championship mentor to work with, someone who has experienced the highs and lows of rushing starterhood.

Relief through Coleman also comes at the quarterback slot. Whether it’s Zach Wilson, Sam Darnold, or a third party that has yet to present himself, the quarterback can’t be a one-man show in New York. He’s going to need some help he can get to help the offense pick up the pieces after the Adam Gase era. While the Jets still have to make changes on their offensive line (Mekhi Becton notwithstanding), Coleman and the receivers added (Corey Davis/Keelan Cole) will certainly help, but Coleman’s arrival definitely gives the quarterback a sizable safety net. The need for aerial miracles could drastically lower.