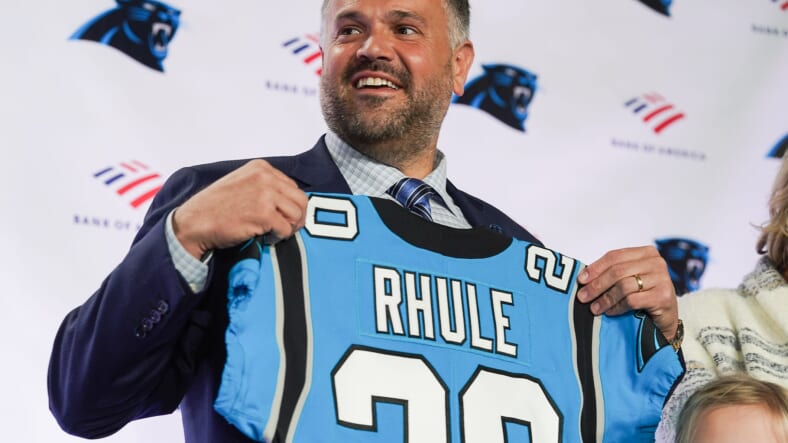 The quarterback trade market has mostly dried up, but if the New York Jets are looking to deal Sam Darnold, Charlotte is a prime destination.

The mythical hands of the football gods are ready to pull up the needle on their record player, ending a turn in the proverbial game of musical chairs played amongst the NFL’s quarterbacks. When the music stops, another turn awaits at the end of April through the NFL Draft in Cleveland.

The New York Jets have a chance to partially control who sits in their chair. But, when you’re a team whose offseason to-do list length rivals that of a CVS receipt, it’s a seat whose occupant you’d like to be aware of sooner rather than later.

As the league inches closer to a date with destiny in Cleveland, the pressure heightens when it comes to a decision on Sam Darnold. While many have penciled in several non-Trevor Lawerence names in the Jets’ slot at second overall, the Jets have stood their ground with Darnold for the time being.

But if they do intend to draft, say, Zach Wilson, Justin Fields, or Trey Lance, trading the incumbent should be a priority. A case could be made that Darnold could be a safety net for a newcomer, but circumstances, as they are, wouldn’t let that work for anyone. The Jets are already a team whose smallest controversies are amplified by social media platforms that thrive on schadenfreude, especially when it happens in a New York market. When rare hope presents itself in this perpetual rebuild, the Jets need to work through that situation with as few questions as possible.

The question of where the Jets have been tooÂ patient can certainly be raised. Several of the aforementioned seats (such as those in Indianapolis, Washington, Chicago, and New Orleans) have been filled while others (Jacksonville) have clear plans to solve their quandaries at the draft.

But, if the Jets are still looking to send Darnold off to not-so-greener pastures, a prime opportunity awaits down south through the Carolina Panthers.

What Darnold needs for his NFL career to succeed is stability and relative peace and quiet.Â Carolina can offer the latter through somewhat macabre circumstances.

In short, no one is expecting the Panthers to contend for the NFC South in the immediate future. After all, the division lists the defending Super Bowl champions from Tampa Bay amongst its members. New Orleans maintains enough firepower to remain competitive with Jameis Winston while Atlanta seems to building toward one final run with Matt Ryan in tow. The Panthers, on the other hand, are engaged in a rebuild that’s now forced to take a detour after Curtis Samuel left for Washington.

But there’s no doubt that Carolina is a bit more quiet on the media spectrum that the New York metropolitan area. They have some pieces that can contribute to their potential future glory days but have fully acknowledged that they’re still several pieces away from contention…including quarterback. But a better setup than the Jets have ever offered him (Carolina franchise tagged blocker Taylor Moton and All-Pro rusher Christian McCaffrey is set to return) and relative, for lack of a better term, obscurity can help truly decide if Darnold is cut out for NFL endeavors.

As he enters his fourth NFL season, Darnold, no matter where he goes, is set to work with his third different coaching regime. It’s not impossible to recover from this; the perfect case study in finding success after some brutal early-career turnover is Alex Smith, who has developed a lengthy, strong tenure despite entering in the midst of countless regime changes in San Francisco.

But for the personal reclamation project to officially begin, a strong, accomplished offensive mind must be at the helm. Enter Matt Rhule, who has dragged entire college football programs from the gridiron underworld through dazzling offensive antics.

When Rhule took over Temple, they were picking up the pieces after Al Golden left for Miami. After a two-win debut, Rhule had the team at .500 before consecutive 10-win seasons. That led to a Big 12 gig at Baylor, where he transformed a one-win team into a Sugar Bowl contender within three seasons. One of Rhule’s primary weapons, Denzel Mims, became a second-round pick of the Jets’.

A familiar face in a stocked arsenal

Despite an ugly five-win ledger, Carolina had a lot of things to be proud of last season. All but three of their losses came by a single possession as the team remained competitive in a year where McCaffrey was limited to three games. But their inability to close games and earn points on late possessions doomed them to be buried in the power NFC South, wasting a 3-2 start.

Manning the quarterback role was Teddy Bridgewater in his first full-time starting job since Minnesota’s star-crossed season in 2015. While Bridgewater’s story is one of the most inspiring in football…regaining a starting position after a non-contact training camp injury in 2016 threatened to derail his career…questions have been raised as to whether he can hold the responsibilities of a full-time franchise role. Rhule did not commit to Bridgewater under center in his year-end statements.

“Teddy is here. I have a lot of respect for him. I believe in what he can do. Iâ€™ve seen glimpses, flashes of us as an offense looking really good,” Rhule said, per ESPN’s David Newton. “With regards to the draft and players, weâ€™ll look at every opportunity to have the best we can have at every position, and that includes the quarterback position.”

Bridgewater is set to enter the second year of a three-year, $63 million deal inked last offseason. While Bridgewater has some experience with the Jets organization through the early stages of his comeback endeavors through the 2017 preseason, it’s unlikely the Jets would want to take on that price tag, unless they want to go with a stopgap option.

When it comes to a trade destination, Carolina is stocked with several offensive weapons, including Robby Anderson, with whom Darnold worked over his first two years in New York. Anderson mentioned that he “loved Sam” shortly before he hit the free market. Reuniting with a familiar face, as well as one of the most electrifying rushing talents in the league in McCaffrey, would help move Carolina in Darnold’s corner. Even with the loss of Samuel, the team seems well pleased with the emergence of DJ Moore as well, though they’ll likely look to upgrade their depth come draft weekend in Cleveland. While the blocking (which includes Anderson’s fellow former Jet Pat Elflein) leaves something to be desired, it’s unlikely that Darnold has had protection of Moton’s caliber…save for probably the one season he had with Mekhi Becton last season.

No matter what happens with Darnold, the Jets will be staring at questions that will take months, probably even years, to be answered. But if they’re opting to move on from Darnold, Carolina might be their best, and possibly only, option.