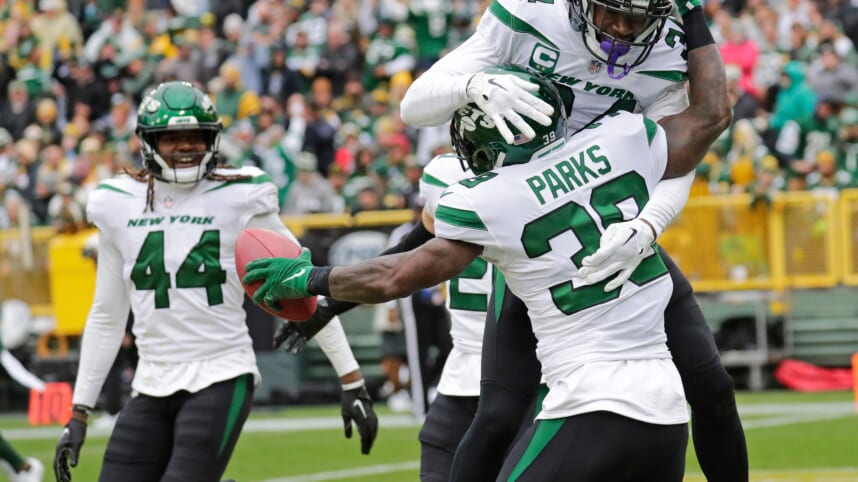 Happy Victory Monday, New York Jets fans. Now three weeks in a row. The Jets are 4-2 on the year with a 3-0 road record.

Some exciting times as it has been a while since this team was this enjoyable to watch.

Yesterday’s win in Green Bay over the Packers was the Jets’ biggest statement to date in 2022. They dominated from start to finish and continued to make progress as an organization undeniable.

Starting with key team stats, the lone category the Jets won in this one was the turnover battle, which they took 1-0. The Jets did happen to struggle mightily on third down, going 1-11. They finished 0-2 in the red zone. Both teams committed seven penalties, the Jets allowed 37 more yards through penalties though.

Despite no overwhelming dominance in any of those team areas, one key for the Jets was capitalizing on special teams. A blocked field goal by Quinnen Williams kept three points off the board for the Packers. Micheal Clemons blocked punt that Will Parks scored on gave the Jets a 17-3 lead and needed breathing room in the third quarter.

Even with the convincing win, the Jets can still keep on improving, which is very encouraging.

The near-perfect day for the Jets’ defense was propelled by defensive tackles Quinnen Williams and Sheldon Rankins. Williams had arguably his best game as a Jet and continues to play like an elite interior defensive lineman. He finished with two sacks, two tackles for loss, and three quarterback hits. Rankins had one sack, a tackle for loss, and a quarterback hit.

Edge rushers Bryce Huff and Jacob Martin provided some pressure. Huff had two quarterback hits, Martin recorded one. In his first game as a Jet, Vinny Curry got a tackle for loss.

In total, the defensive line had a terrific day, recording four sacks and nine quarterback hits. They also held Aaron Jones and AJ Dillon to a combined 19 carries for 60 yards (3.2 per rush).

On the second level, in his first game back, Quincy Williams gave the Jets 14 tackles, highlighted by a few big hits. C.J. Mosley had 11 tackles, and a pass defended. Lastly, Kwon Alexander had a huge pass breakup on a fourth down and long in the fourth quarter.

The Jets’ pass defense held Aaron Rodgers to six yards per attempt. In total, the Packers threw the ball 45 times. Their top two wide receivers, Allen Lazard and Romeo Doubs, combined for eight catches on 18 targets, 97 yards, and a touchdown.

To no surprise, the Jets’ great cornerback trio of Sauce Gardner, DJ Reed, and Michael Carter II held it down. Brandin Echols filled in on a few plays and contributed as well. Safeties Jordan Whitehead and Lamarcus Joyner both had another good game combining for 11 tackles. Joyner got the lone turnover on the day, picking up a fumble.

The exceptional rookie kept up his electrifying play in yesterday’s statement win. Breece Hall had 116 yards and a touchdown on the ground averaging 5.8 yards a rush. He is currently on pace for 1,107 yards rushing and 1,725 scrimmage yards as a first-year player. Hall has been special for the Jets very early on in his career.

Braxton Berrios had a 20-yard score on a well-schemed end-around. Michael Carter recorded 47 all-purpose yards, highlighted by a big 25-yard run late. Corey Davis was the leading receiver with two catches for 52 yards, one grab going for 41 yards.

Up front, the offensive line of the Jets enabled the ground game to rip off 179 yards and two touchdowns with 5.4 yards a carry. They limited a capable Packers pass rush to two sacks and just two quarterback hits on the day.

To conclude, Zach Wilson went 10-18 for 110 yards (6.1 per attempt) with no interceptions and a 73.8 rating. It was a tough day for the passing game against the Packers’ secondary. For the most part, Wilson took good care of the football and stepped up with accurate throws when needed. Since returning, the Jets are 3-0 with Wilson.