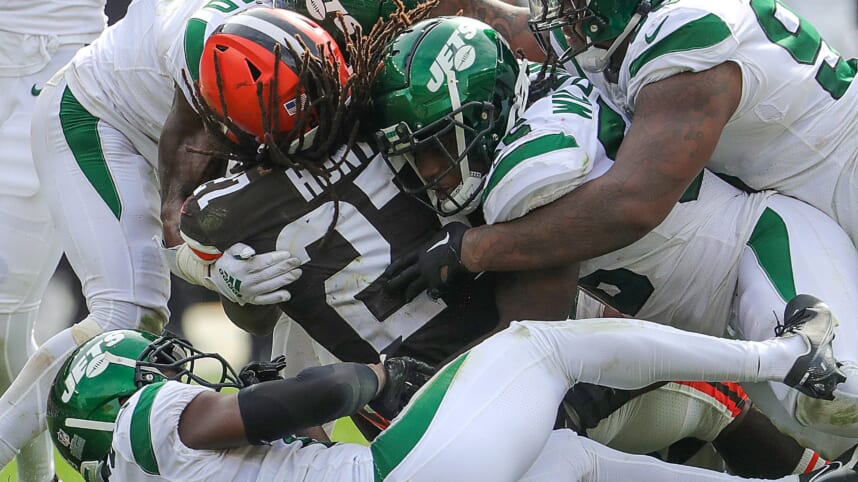 Browns running back Kareem Hunt is swarmed by the New York Jets during a third-quarter run, Sunday, Sept. 18, 2022 in Cleveland. Akr 9 18 Browns 10

The sweet feelings of a victory Monday. Something New York Jets fans have not felt in the month of September in four years.

Yesterday’s come-from-behind victory was one in which the Jets displayed immense resilience. The team fought when the odds could not be more against them (99.9% chance of winning for the Browns after Nick Chubb’s touchdown), and the Jets players and coaches simply deserved a win with their relentless battling.

Much better day for the Jets’ offense:

Following a rough Week 1, the Jets’ offense bounced back in a big way yesterday. They scored 30 points for the first time since Week 9 of last year.

Starting in the trenches, it was a much better day for the Jets’ offensive line. The only potential knock was that in between the tackles, it was not a great day running the football for the Jets. In the passing game, they significantly improved compared to the first game of the year. They gave Joe Flacco time most of the game and ultimately only allowed just two sacks and four quarterback hits.

Then, with Flacco, things went well for him once again against the Cleveland Browns. He finished 26-of-44 with 307 yards and a whopping four touchdown to no interception ratio, which led to a 110.7 rating.

On the ground, the Jets totaled 20 carries for 93 yards. Rookie Breece Hall had a nice big game for himself, leading the rushing attack. On seven carries, Hall had 50 yards (7.1 per carry) and a long 23-yard run. As a receiver, Hall also had his lone target on the day go for a 10-yard touchdown that the Jets needed right before the half when they had no timeouts left.

As stated above, things inside the tackles running the football in this game could have been better for the Jets. Michael Carter was held to just 23 yards on seven carries. Carter was pivotal in the passing game as he usually is, though. He helped propel the game-winning drive with two catches, gaining yardage while still getting out of bounds to stop the clock. In total, Carter caught all five of his targets for 27 yards.

As expected, the Jets’ top four options in the passing game were Garrett Wilson, Elijah Moore, Corey Davis, and Tyler Conklin. Moore had three catches for 41 yards. Conklin caught six for 40. Davis had two grabs for 83 yards and a big 66-yard touchdown that started the comeback.

The star for the Jets in this one was the rookie 10th overall pick, Wilson. After limited reps in Week 1, Wilson was involved all throughout yesterday with 14 targets. Wilson had eight catches for 102 yards, a long of 31, and two touchdowns highlighted by, of course, the game-winner. In just his second game, Wilson is already proving the type of difference-maker he can be for the Jets for a long time.

Not a great day for the Jets defense:

The Jets’ defense can definitely play better than it did yesterday. They allowed 30 points, and 405 yards of offense to the Browns, with 184 yards picked up on the ground.

Along with the run defense, the Jets’ pass rush is going to have to pick things up for this team to keep on winning. The rush proved what it can be when it mattered most. Down late in the game, the Jets got great pressures generated by their two headliners, Quinnen Williams and Carl Lawson, who split a third-down sack with minimal time left.

The game-winner was sealed by third-year safety Ashtyn Davis, who tallied an interception in his only snap played on the day.

All game long, the Jets’ special teams made a strong impact. It started early in the game with a converted fake punt as Braden Mann completed a pass to Jeff Smith that led to the Jets’ first touchdown.

Mann averaged 47.3 yards per punt yesterday, and two of his four punts were downed inside the 20.

Greg Zuerlein was clutch for the Jets. He went 4-for-4 on extra points, which included taking the lead with 22 seconds left of play. Zuerlein also made a long 57-yard field goal that tied things up at 17 for the Jets.

Lastly, down 30-24 with 1:22 left to play and no timeouts to spare, Will Parks kept the onside kick attempted by Mann in bounds, and Justin Hardee recovered it. It was the start of the electric game-winning drive for the Jets.

The special teams unit of Brant Boyer showed up and made key contributions on the way to the first win of 2022 for the Jets.

The Jets did not win in any team categories but also did not beat themselves with mental errors like they did a week ago.

The turnover battle finished in a 1-1 tie. While the Browns had the better third-down efficiency (8-of-12) than the Jets 8-of-15, they still converted more than half of their third downs, significant progress from last week.

In terms of penalties, the Jets did lose the battle with eight for 57 yards compared to the Browns’ five for 38. The key for the Jets was that aside from their lone turnover on the day, their other three red zone drives all resulted in touchdowns.

The post-game emotion from the Jets was raw and thrilling for the fans. Simply, this was a great team win that the Jets earned.