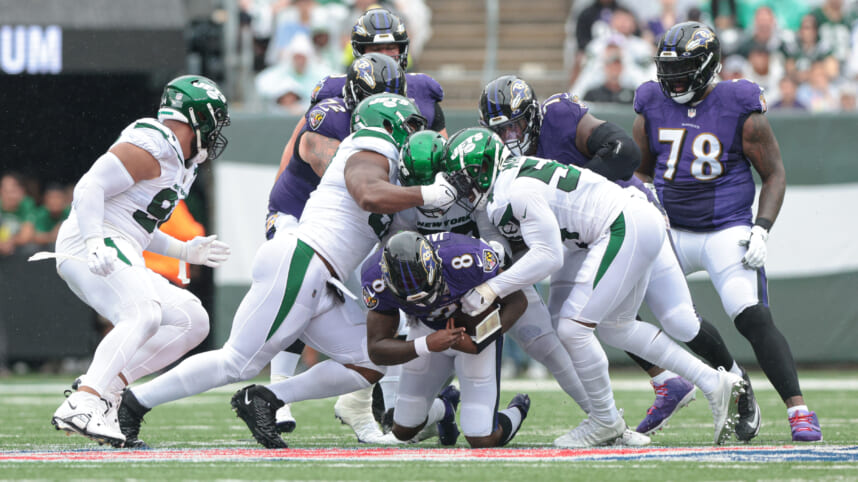 An important Week 2 game lies ahead for the 2022 New York Jets. Following a disappointing home loss to start the year, the Jets need to bounce back and get themselves in the win column early on in the regular season.

The Jets will play their first road game of the year against the Cleveland Browns. Going up against a team that won on the road last week and in what will be a loud environment, a young Jets team is presented with a good challenge here. It will be vital for the Jets to not fall to 0-2 right away for the fourth straight year.

The Jets showed some things to feel good about in the first half last week. Now, they need to build on that and put together a full game of sound execution.

It starts in the trenches, where the Jets lost on both sides of the ball a week ago.

This should be a game Michael Carter and Breece Hall combine for roughly 30 carries. Staying ahead of the chains in terms of down and distance will give this offense its best opportunity to be successful in this one.

It would likely help the pass protection, which was poor last week. Easing in Joe Flacco is necessary, especially against a front that has Myles Garrett. From there, ideally, the Jets can find a way to create a big play or two downfield in the passing game, it could make the difference.

Defensively, in the trenches, slowing down the Browns’ physical running game is the focal point. Anticipate the Jets having a similar plan to a week ago in which they loaded the box with seven or eight defenders.

The Jets should force the Browns to be one-dimensional. If so, the cornerback trio of Sauce Gardner, DJ Reed, and Michael Carter II is one to feel comfortable with as they proved themselves exceptionally well to start the year.

It will however be paramount that the Jets generate much more pressure rushing the quarterback than they did a week ago. The talent along the front four is there to do so.

Lastly, arguably the top takeaway from Week 1 was that the Jets beat themselves with mental mistakes. They lost the turnover, penalty, and third down battles while creating no explosives downfield in the passing game and committing major special teams errors.

All of those things have simply got to be cleaned up for the Jets to win this game. From a talent perspective, the Jets are significantly improved. Now, they need to start proving it on the field.

Ultimately, this is a game that the Jets should win. It will likely come down to the fourth quarter, and the Jets should be victorious by about a field goal, picking up their first win in 2022.