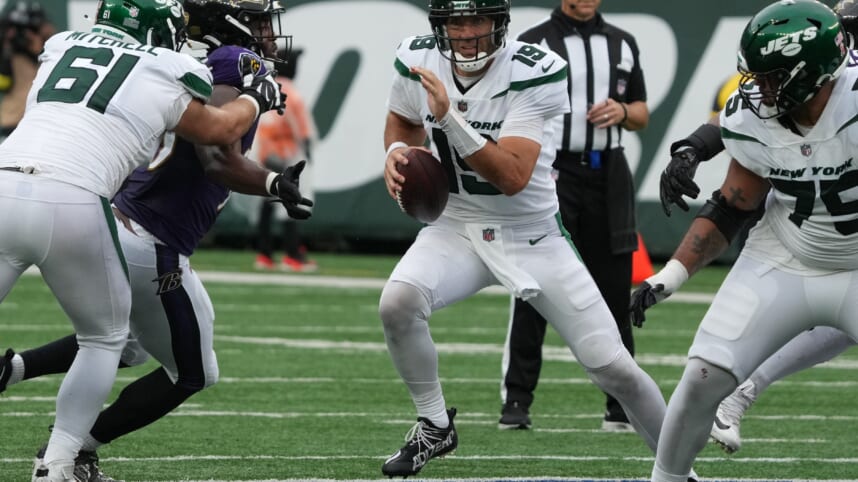 The start of the 2022 season for the New York Jets got off on the wrong note. After a competitive first half, the Jets fell short to the Baltimore Ravens 24-9.

This was a game in which the Jets lost in the trenches on both sides of the football. Offensively, the Jets could not finish some encouraging drives they started. Pair that with a few special teams’ miscues, and the defense was inevitably going to break.

What went wrong for the Jets?

Start by keeping it simple with the key team stats. The Jets lost the third down, turnover, and penalty battles.

Simply put, not a formula for success for the Jets against a better football team. The Jets also went 1-for-2 in the red zone.

It is frustrating because the Jets had a good plan defensively to contain the Ravens’ top two players. Lamar Jackson ran for just 17 yards. Mark Andrews was held to 52 yards.

After a sound start by the Jets defense, untimely penalties and busts in coverage allowing for big plays ultimately hurt. Also, the pass rush had to be more impactful, knowing the Ravens were down to their third left tackle. The Jets’ one turnover also came late in the game when it was well out of hand.

The Jets stuck with the run, considering how they were down on the scoreboard most of the game. That being said, the Jets ran it only 16 times between Michael Carter (10 carries) and Breece Hall, who had six rushing attempts. The two each broke a few big ones, Carter totaled 100 yards from scrimmage.

Offensively, the issue stemmed from poor pass blocking. Without Zach Wilson’s mobility, the Jets did not generate anything when protection broke down. Joe Flacco threw it 59 times in this one. In the passing game, the Jets spread the football around, however, a chunk of it came in garbage time.

A few good things to make note of and take from this game. The Jets top four draft picks, Sauce Gardner, Garrett Wilson, Jermaine Johnson, and Hall, all looked as advertised. Rookie right tackle Max Mitchell held up. Free agent signings in the secondary, DJ Reed and Jordan Whitehead, played good. With all of the run defense concerns, the Jets did a solid job limiting the Ravens to 63 yards and a long of 10 (three yards per carry).

Lastly, the exciting skill, talent, and the depth of it were on display. Better execution upfront from the offensive line will be key moving forward throughout the year.