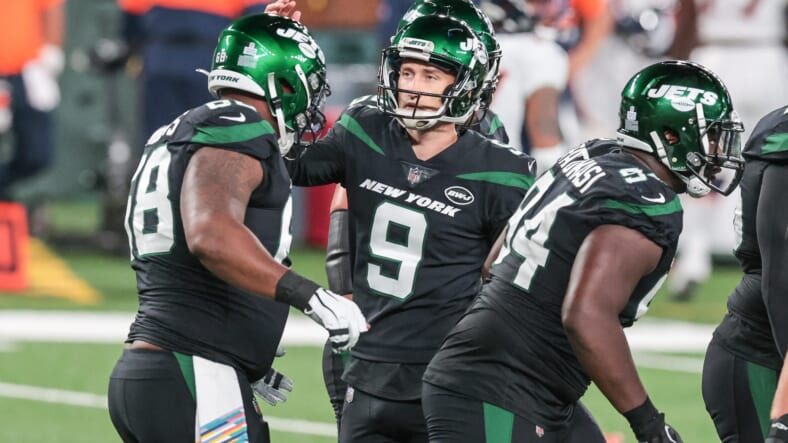 The well-traveled Ficken got off to a hot start in 2020, but his New York Jets career appears to be over after two seasons.

The New York Jets have announced several roster moves leading into their season finale against the New England Patriots (1 p.m. ET, CBS). Their most consequential moves may be the release of kicker Sam Ficken and the activation of starting blocker Greg Van Roten off of injured reserve.

Ficken, 28, sees his Jets career end after two seasons, continuing the Jason Myers saga on a sour note. He began the year on a strong note, converting his first nine field goal attempts and all six of his extra point opportunities through Week 6 action. A groin injury sidelined him for the next three games before he briefly returned for the Week 11 tilt against the Los Angeles Chargers, missing two extra points in the 34-28 defeat. In yet another visit to Los Angeles, this one coming against the Rams, Ficken score 11 of the Jets’ 23 points in their first win of the season, but he missed two, an extra point and field goal each, in last week’s victory over Cleveland at home.

The Jets (2-13) will use Chase McLaughlin as their kicker in New England. McLaughlin entered the league in 2019 and has spent time with eight different organizations in some capacity. This season, he was originally cut by Indianapolis after training camp before joining Minnesota’s practice squad. He later served as the Jacksonville Jaguars’ kicker for three weeks, converting all four field goal attempts, before the Jets picked him up in December. McLaughlin will become the fourth different kicker to appear in a regular season game for the Jets since the Pro Bowler Myers departed for Seattle after the 2018 campaign.

Van Roten partook in every offensive snap over the Jets’ first 11 games before leaving their Week 13 contest against Las Vegas with a toe injury. Ironically, the 30-year-old Van Roten was also paced in IR with a toe injury last season during his final year with the Carolina Panthers. Signed to a one-year deal over the offseason, Van Roten has been one of the Jets’ more consistent offensive line.

In addition to Van Roten and McLaughlin, a quartet of other Jets will make their debut on the active roster this week. Linebackers Noah Dawkins and Brady Sheldon were promoted from the practice squad, while another linebacker, Sharif Finch, and a defensive lineman, Tanzel Smart, were picked up and moved to the 53-man ledger.