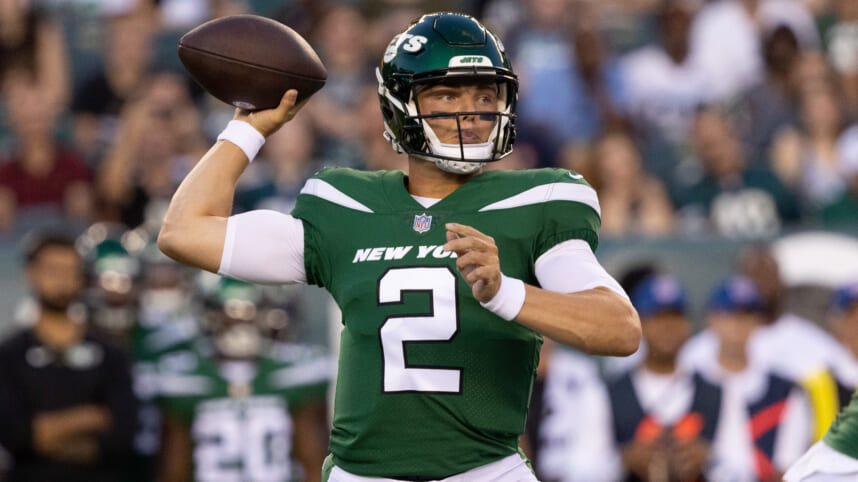 The first preseason game for the New York Jets has come to a conclusion. Following a disastrous start, the Jets ultimately found a way to come away with a 24-21 win over the Philadelphia Eagles. However, the most important news from the night is the injury status of second-year quarterback, Zach Wilson.

After a frustrating end to the first series with an interception and down 14-0 in no time, Wilson attempted to make a play with his legs. It ended with what was initially reported by the team as a knee injury. The official status of Wilson indicates he escaped without a torn ACL but could have re-injured his PCL. The hope is that he won’t miss extended time but could be ruled out for the first few weeks of the regular season.

Robert Saleh stated to the media that there is, “No update yet. We’re going to wait on the MRI tomorrow.” Saleh did say that Wilson’s ACL is “supposed to be intact” but to ultimately “wait until the MRI.”

Per Dianna Russini of ESPN, sources indicated that it could be a PCL injury on the same knee Wilson hurt last year. She stated that the team is hopeful it could just be a timetable of a few weeks for Wilson’s recovery.

Prior to Wilson’s injury, the defense of the Jets struggled to make a stop. A frustrating third-down unnecessary roughness penalty from Quincy Williams extended the Eagles’ drive, leading to points. It put the Jets in an immediate hole.

Aside from the tough injury to Wilson, the Jets had some skill position players offensively display some promise. Rookies Garrett Wilson and Breece Hall showed that they belong. Wilson recorded two catches for 25 yards. He showed his terrific route running and created separation for himself. Hall had five carries for 15 yards, with his longest run going for eight. He showed his athletic skills on a third, and short, he converted bouncing to the outside.

Pass catchers Tyler Conklin and Elijah Moore made an early impact. Conklin was targeted four times, catching three passes for 23 yards. He converted one third down over the middle in the first series. Moore also converted a third down on a well-run slant route that went for nine yards.

A player who shined in the preseason last summer and spent the 2021 season on the practice squad, defensive tackle Tanzel Smart had two sacks. Another member of this deep defensive line competing for a roster spot, 2020 third-round defensive end Jabari Zuniga recorded a sack as well.

Three linebackers with an opportunity to carve out a role, Del’Shawn Phillips, Jamien Sherwood, and Kai Nacua, were active for the Jets’ defense in this one. Phillips had seven total tackles. Sherwood totaled six tackles and picked up a fumble which was forced by Nacua.

Following the starting unit offensively, Mike White played a ton. He finished 10-for-20 with 98 yards. Third-year running back, La’Mical Perine, who is competing for a roster spot had 10 carries go for 51 yards. Following two catches, Denzel Mims had a discouraging drop. Rookie third-round pick Jeremy Ruckert scored a touchdown. Lastly, former wide receiver turned tight end Lawrence Cager had two impressive catches go for 40 yards. He showcased his explosiveness which is to be expected with his receiver background.

Finally, with the kicking competition, Greg Zuerlein went 3-for-3 on extra points. Eddy Pineiro went 1-for-1 from 26 yards. In the end, nothing too deciding between the two in this one.