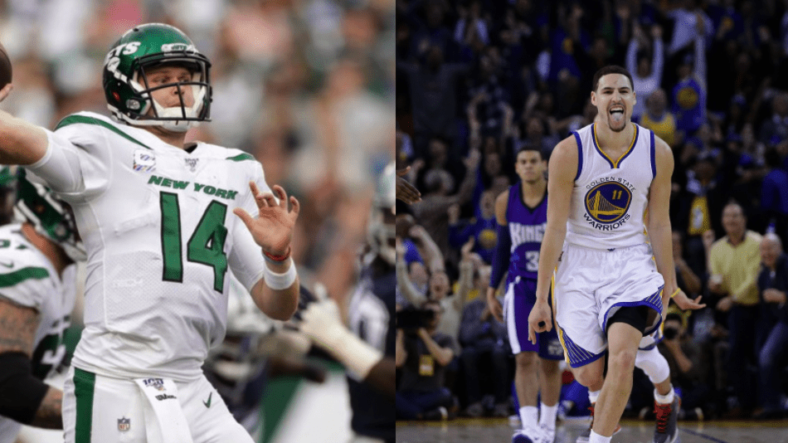 Set to return to the gridiron, the New York Jets quarterback hit the hardwood alongside a fellow Golden State sports legend.

If anyone in the NBA’s Orlando bubble needs any help over the next few weeks, Sam Darnold may be on hand to assist.

In video posted by Instagram user @ChrisBennett143, the New York Jets quarterback and two of his passing counterparts traded in the pigskin for the roundball alongside NBA All-Star Klay Thompson. Known for throwing six-pointers, Darnold tosses up several triples from long-range alongside the Golden State Warriors’ shooting guard. Darnold is continuing to prepare for the upcoming NFL season alongside Buffalo’s Josh Allen and Kyle Allen of Washington (no relation). The trio has been working with former draft pick Jordan Palmer (brother of Carson) in California.

Darnold’s basketball prowess shouldn’t come as any surprise. Like Thompson, Darnold got his athletic start on Southern California’s high school scene. He was a two-sport athlete at San Clemente High School and his basketball accolades include league MVP honors. His high school coach Marc Popovich believed that Darnold could’ve played college basketball in the Pac-12 Conference and that his hoops prowess helped his case on the football field.

“Basketball, a lot of times, especially with our style of play, was kind of free-flowing in a way,â€ Popovich said to Alex Kirshner of SB Nation in November 2016. â€œThere was not necessarily something set every single time down, so he had to get used to playing that way. I think that definitely helped in football. Heâ€™d had those things where heâ€™s had bad snaps and heâ€™s rolled out and completed a 32-yard pass, and kind of ridiculous stuff like that. And I think in those improvising situations, the basketball really helps. The ability to read defenses, to see where your teammates are, all that stuff really translates.â€

Darnold instead shifted fully to football and threw for 7,229 yards and 57 touchdowns over two seasons as the starter at the University of Souther California. That came several years after Thompson also burst onto the scene in the Pac-12 with the Washington State Cougars men’s basketball program. Thompson’s No. 1 was retired in Pullman during their January tilt against Oregon State.