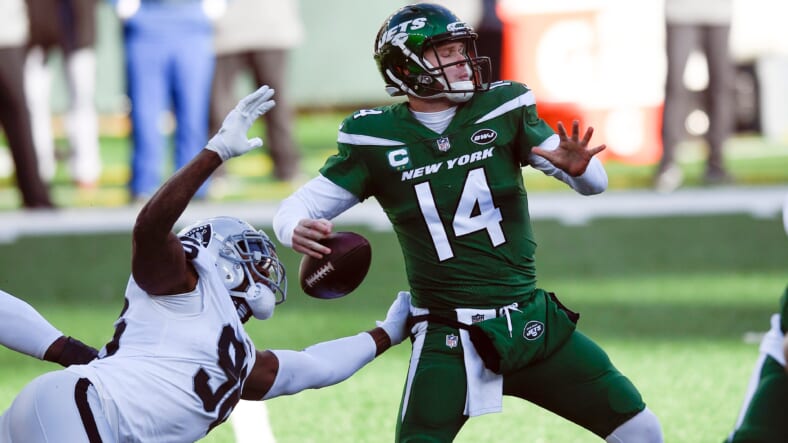 The New York Jets will welcome in yet another passing savior next week. How can they avoid the pratfalls of the prior era?

The New York Jets have answered the question of “what” when it comes to the second overall pick in next week’s NFL Draft (8 p.m. ET, ABC/ESPN/NFL Network). Through trading Sam Darnold, it’s all but assured that the Jets will be taking a quarterback, but the lingering quandary is “who”? Many expect it will be BYU passer Zach Wilson, but New York management continues to do its due diligence on non-Trevor Lawrence prospects like Justin Fields, Trey Lance, and Mac Jones.

For Jets fans, this process has become distressingly familiar. It’s been a long time since the team had any form of consistency in the franchise quarterback role, a spot plague by turnover on both the field and depth chart. The new century has been particularly cruel: would-be saviors found in the first two rounds have fizzled out, doomed to obscurity or inclusion on the yearly all-time bust lists that accompany draft weekend. Darnold was the latest unfortunate name added to that list through the trade to Carolina after three years of general inconsistency.

But it wouldn’t be fair to pin all of the Jets’ struggles of the past three seasons on Darnold. New York has made their share of mistakes that any quarterback would have trouble overcoming. How can they ensure a smoother transition for a new quarterback this time around? It won’t be easy, as the Jets’ problems won’t automatically be over once the newcomer takes over. ESM has three ways to avoid embarking on yet another passing search…

Darnold was officially credited with a career-best 217 rushing yards last season. But if his scrambling was accounted for, he might’ve rivaled Derrick Henry’s final tally…OK, maybe Dalvin Cook, but still.

With D’Brickashaw Ferguson and Nick Mangold long gone, the Jets have spent the past few seasons paying dearly for the sins of the Mike Maccagnan era, where upgrading blocking was more of a suggestion than it was a requirement. Poor blocking can derail a young quarterback’s career before it ever truly begins. The most blatant case is the cautionary tale of David Carr, the first rookie chosen in Houston Texans history who was sacked an NFL record 76 times in his debut year. He (and the Texans as a whole, for that matter) was never able to get his NFL career back on track. Darnold fortunately never reached those dubious heights, but he was sacked 98 times in three seasons…and he missed ten games due to injury and illness.

To his credit, Joe Douglas has tried to make up for the neglect, even if the Jets’ 2020 renovations have left something to be desired. His first moves as general manager were to convince Ryan Kalil out of retirement and trade a draft pick to Baltimore for Alex Lewis. He brought in veterans like Connor McGovern, George Fant, and Greg Van Roten and passed on elite receiving talents to draft Mekhi Becton. Thus far, only Becton looks like a long-term piece. It’s great to see that Douglas recognizes the importance of blocking, but talent evaluation will be vital over the next few years.

There is the occasional, once-or-twice-in-a-lifetime passing talent that is able to single-handedly change the game. Legends like Tom Brady and Peyton Manning have probably extended the careers of countless receivers. But putting the pressures of New York is too much to bestow on a rookie quarterback and it’s downright harsh to expect any newcomer to be an instant fix for a team that’s nursing a decade-long playoff drought.

We’re still not sure who’s going to line up under center for the Jets come September, but he’s going to be blessed with a relatively warm situation. The Jets brought in a proven multi-talented weapon in Tevin Coleman to headline a run game working with three younger projects. Big play talents Corey Davis and Keelan Cole were added to receiving corps that welcomes back Jamison Crowder and Denzel Mims.

Patience will nonetheless be the name of the game. Again, any quarterback short of de-aged Joe Namath isn’t going to thrust the Jets back into relevancy. There are simply too many holes that even next weekend’s draft won’t fully plug and too many established contenders in the AFC to get by. The newcomer’s first season should be about establishing a rapport with his new weapons and coaches. Any extra wins that happen to emerge (the Jets’ o/u is currently 6 at the William Hill sportsbook) can be considered extra credit.

Taking in Robert Saleh as a head coach was a good way to start things off. Sure, a defensive mastermind like Saleh seems unconventional when a team is trying to groom a long-sought-after franchise quarterback. But this time around, it’s not the hot-take artists that are praising the hire…it’s the players. Saleh’s arrival and promotion has earned positive reviews from players both domestically and abroad, a welcome change compared to the relative indifference from on-field participants that plagued Adam Gase’s arrival. Hometown players buying into what Saleh has to offers and outsiders expressing jealousy should help present an ideal emotional setting for a quarterback taking his first NFL steps.

No quarterback is an island. Even the most impactful quarterbacks in league history have a name, nor names, forever spoken in the same breath as their own. Brady had Julian Edelman and still has Rob Gronkowski. Manning had Marvin Harrison and Reggie Wayne. Namath fulfilled his legendary guarantee in Miami with the help of longtime rushing collaborator Matt Snell, not to mention future Hall of Fame electee Winston Hill on the offensive line.

Now consider what Darnold dealt with in modern New York: by the time Week 1 of the 2020 season rolled around…his third and final season in green…the 2018 draftee had no receivers leftover from his rookie year with the exception of tight end Chris Herndon (whose sophomore campaign was effectively wiped out by injuries and a suspension). The offensive line was likewise completely different from even one year prior. Darnold took his snaps from three different starting centers (Spencer Long, Jonotthan Harrison, and McGovern).

Simply put, all will seem relatively well once the new quarterback is on the roster. But once he’s secure, it will be all about building gridiron camaraderie with the rest of the roster. That doesn’t only apply to the offense either: building a strong defense can help keep the game manageable for a youngster while good special teams can help turn the field in his favor. Endless amounts of turnover will only lead to chaos for a young man that is already facing one of the most stressful jobs on the face of the Earth: NFL franchise quarterback. Darnold and the Jets learned that the hard way.