With the release of Pierre Desir, rookie Bryce Hall will take on an expanded role in the New York Jets secondary.

The New York Jets bid another one of their veteran starters farewell this week, placing cornerback Pierre Desir on waivers. Desir joins Le’Veon Bell, Steve McLendon, and Avery Williamson as New York starters that have been sent elsewhere as the team sinks further into football oblivion.

With Desir’s departure, younger players will be expected to take on a larger role over the Jets’ remaining seven games. Cornerback Bryce Hall will be among the latest to step up, as he moves to the front of the depth chart with Desir seeking a new team. The Jets (0-9) hit the west coast to battle the Los Angeles Chargers (2-7) in their first-ever visit to SoFi Stadium on Sunday (4:05 p.m. ET, CBS).

Hall was the Jets’ fifth-round pick (158th overall) back in April’s draft, hailing from Virginia. The early portions of his season were spent on the reserve/COVID-19 list and later the non-football injury list, but he made his debut in the Jets’ most recent defeat at the hands of the New England Patriots. He would go on to earn two tackles in his first taste of NFL action. With Desir gone, and Bless Austin recently sent to injured reserve, Hall is expected to play a major role in the Jets’ defense in the final stages of this woebegone season.

“I attacked the rehab process just how I attack my preparation in playing this game,” Hall said this week, per Chris Ryan of NJ Advance Media. “The biggest thing that’s helped me is my faith and just having that positive outlook that I will be able to. I felt like God brought me here for a reason, so he’s like, ‘You’re gonna be fine. You’re gonna have an opportunity. Now keep you know just learn as much as you can, through that process.’”

[EDIT: 11/23/20, 4:00 p.m. ET:] A previous version of this article referred to Bishop McDevitt’s nickname as the “Royal Lancers”, rather than the Crusaders. This has been corrected.

He Got His Start on Offense

It’s ironic that Hall has made his modern football living through making life miserable for opposing receivers, as his career began in the position he now neutralizes. He entered the national scene as a receiver at Bishop McDevitt High School, a parochial school in Pennsylvania, earning 2,386 yards and 35 touchdowns over four seasons. Afterward, he was offered two Football Bowl Subdivision scholarship offers, choosing Virginia over Coastal Carolina.

“I think all those years playing receiver have helped with my understanding of what offenses are trying to do and with my ball skills,” Hall said in a pre-draft retrospective with Ron Counts of The Daily Progress. “It was funny because we were so raw in terms of fundamentals and technique. (I) really had to stumble into it and take in whatever the coaches were saying. After a lot of failing and getting roasted multiple times in practice, I started to find my way.”

The switch obviously played out for the better; Hall went on to lead the nation in pass defenses during his junior season in 2018 (21), an accomplishment that helped him earn first-team All-ACC honors at the end of the year.

Hall could’ve been donning the blue and orange threads of the Knicks rather than the green and white of the Jets had he had his way upon reaching the Wyncote, PA campus of Bishop McDevitt. It was the Crusaders’ head football coach, Jeff Weachter, who was able to convince Hall to trade the hardwood for the gridiron permanently after Hall was ready to hang up his helmet during his sophomore season.

“I said ‘You’re kidding. At best, you’re a Division II basketball player. You’re a D-I football player,’” Weachter said in Counts’ report, mentioning that Hall missed the Crusaders’ first scrimmage that season while tending to basketball matters. “He called me the next day on Sunday and said ‘Coach, I made a horrible mistake. Can I still come out?’ I said ‘Of course. But you’re not going to start the first couple games.’ I understood because that’s just Bryce. He wants to be perfect at everything he does, and he wanted to spend that time perfecting basketball.”

Only destiny and fate know how drastically Hall’s life could’ve changed with the decision. True to Weachter’s prediction, he earned a Division I invitation to the Cavaliers, where he not only earned the publicity that led to his drafting, but also met his fiance Anzel Vilojen, a former member of Virginia’s field hockey squad. Days after the Jets brought him to New York, Hall asked Vilojen to marry him in a successful proposal. 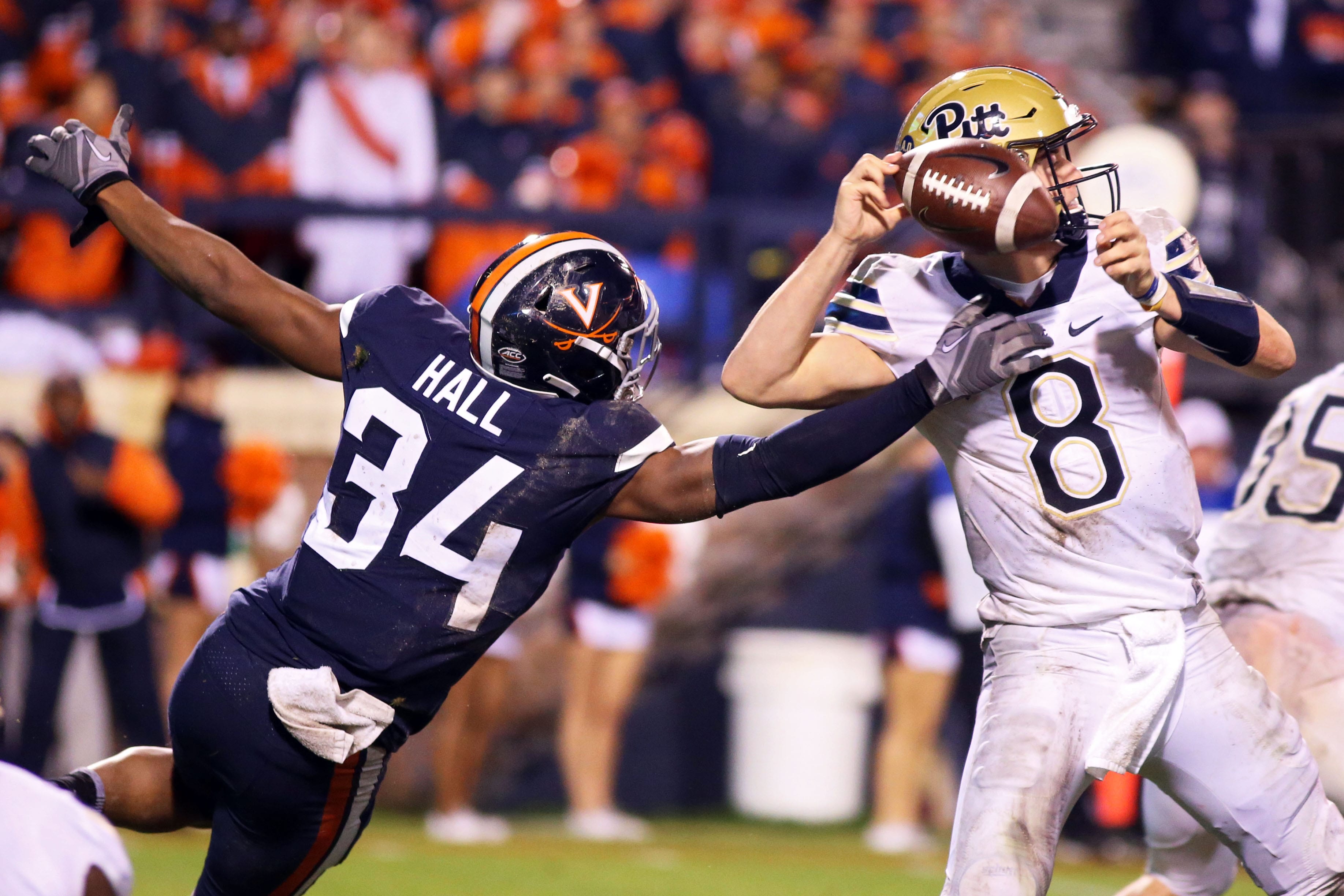 He Has Worked Through a Lot of Adversity

The Jets have added several veterans whom they hope can direct the team through these times of adversity, but the rookie Hall can serve as a strong source of inspiration, even as he enters only his second week of NFL action.

Some experts felt that Hall could’ve been a first-round pick had he entered the draft after his junior campaign. Athlon Sports, for example, had Hall ranked in the top ten of their premature 2020 draft rankings. Hall, however, opted to return for his senior campaign, a year that ended early due to a devastating ankle injury. The injury played a major role in his fall from round one to day three.

But Hall never came to regret his decision to return to Charlottesville. In fact, from the moment the injury happened, the defender was looking to glean the positives out of it.

“I feel like I’m already better from it now, because that’s the thing: When you go through difficult things like that, it really molds your character. It just creates something in you that wasn’t possible to be developed before, had you not gone through this process,” Hall said, per Jeff White of Virginia’s official athletics site. “Now I’m in a position where I’m becoming a better leader, and I’m developing different gifts that I feel like I’ve had in me but just haven’t come out, like speaking. I’m usually somebody who leads by example. Now, my voice is the only thing I have to help and encourage and communicate.”