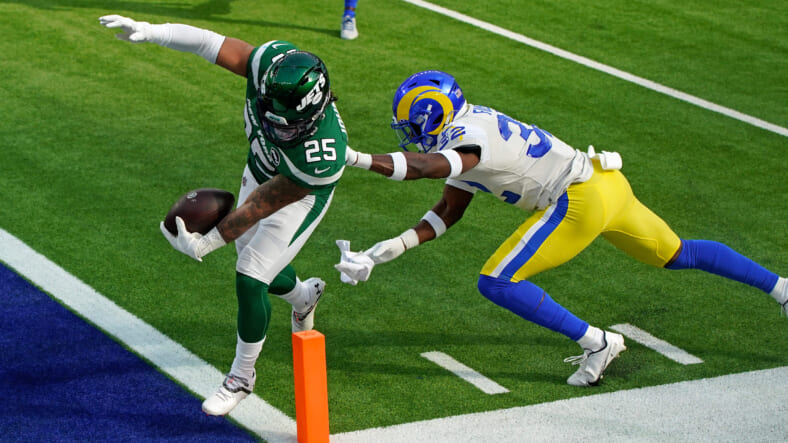 The New York Jets pulled off the unthinkable on Sunday, topping the Los Angeles Rams in a shocking road upset.

For the first time in 357 days, the Jets (1-13) were on the right side of the scoreboard, topping the Los Angeles Rams in a shocking upset out west on Sunday evening by a 23-20 final. Neville Hewitt was among the Jets’ stars with 10 tackles, while Jamison Crowder had a team-best 66 yards through the air. New York defenders had three sacks on the evening, playing a part in dealing a brutal blow to the Rams’ (9-5) chances to win the NFC West. The Jets will also avoid landing in 16-game infamy, a fate that still belongs to only the 2008 Detroit Lions and 2017 Cleveland Browns.

Much has been made about the Jets continue to insist on providing Gore a retirement tour of sorts while younger backs sit behind him. But he made the most of his opportunities in Los Angeles and earned some of the biggest touches in Sunday’s victory. Gore helped set the pace with a one-yard score on the Jets’ first drive of the second half and later caught the six-yard pass just before the two-minute warning of the fourth quarter that allowed Jets fans to start celebrating…the ones that wanted to, anyway.

.@QuinnenWilliams got the power and the quickness.

Even with an elusive win, it’ll take Jets fans a lot of football therapy to fully remove the demons of 2020 from their mindset. But the season could likely go down as the year that gave rise to the justification of Quinnen Williams at the third overall slot in his draft. Williams continued his breakout on the Los Angeles stage, invading the Rams backfield numerous times and picking up his team-best seventh sack of the season. It’s unclear whether Williams will get to finish his sophomore season, as he missed the finishing touches in the locker room with a concussion. If his season is indeed over, its relative brevity shouldn’t take away the progress Williams has made and the opinions he has changed.

Johnson is one of those names that have stuck behind Gore’s final days as a feature back, even as he became the first Jets rusher in 26 calendar months to reach triple-digits in yardage in a single game. But he’s making the most of his chances and more or less one of the greatest examples and cases against tanking: the former sixth-round pick from Detroit is potentially creating a longer career for himself, whether it’s in New York or elsewhere. Johnson was one of Darnold’s favorite targets during Sunday’s action, tying with Crowder and Robert Woods for a game-high six receptions. One of his first accounted for a touchdown on the Jets’ opening drive that foreshadowed the magic ahead.