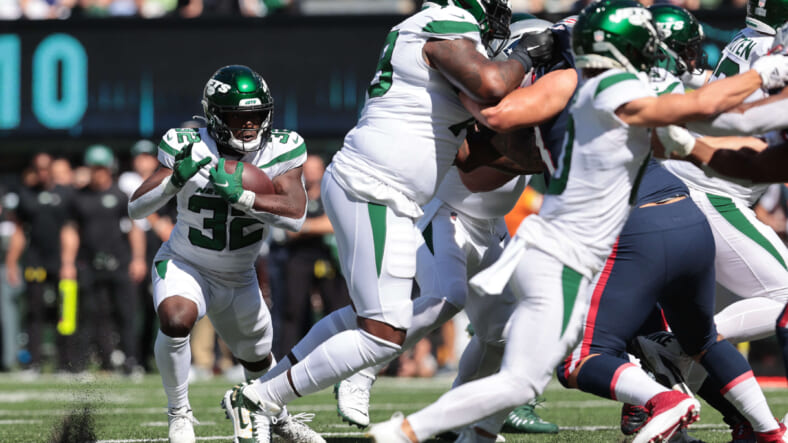 Sunday will be defined by Zach Wilson’s mistakes, but several bastions of hope emerged from the New York Jets’ latest loss.

Damien Harris and James White each had a rushing touchdown while J.C. Jackson earned two interceptions of Zach Wilson. The second overall pick’s East Rutherford introduction was a painful one, as he threw four interceptions in a 25-6 defeat. New England (1-1) has now won 11 consecutive meetings over the Jets, who fall to 0-2 for the third consecutive season.

Nice catch by Braxton Berrios, replay shows he had both feet in pic.twitter.com/sek1YabcHO

With Corey Davis enduring a tough afternoon (one of Wilson’s interceptions went through his hands and into the waiting arms of J.C. Jackson) and Jamison Crowder still working his way back from COVID-19, Berrios came through for the New York offense. His 73 yards were a new career-best and he leads the Jets with 12 receptions in the early going. Berrios also averaged over 23 yards per kick return, including a 38-yard tally that set up the Jets’ only points of the first half.

Marcus Maye off the edge for the third-down sack, and so far, #Jets defense has been much more "fancy" overall. More stunts, slants with run in mind, and a few blitzes with loose coverage on the back end. @nyjetspic.twitter.com/ROaRA3SGRp

Considering the awkward circumstances Wilson’s mistakes forced them into, the Jets defense mostly prevailed. New York particularly raised the pressure in the first half, earning three sacks of Mac Jones, the first coming from the safety Maye. The Jets’ real problem was stopping the New England running backs. White caught all six of his targeted passes (tallying 45 yards) while Harris more or less put the game away with a scoring run that dragged several defenders in the end zone. Maye’s ability to break into the backfield is certainly inspiring to a Jets defense working with makeshift material.

The Jets running back committee put forth a solid effort, as metropolitan rushers had 152 yards on 31 attempts (4.9 average). Carter was particularly impressive, serving as one of the Jets’ most consistent offensive sources. Many expect Carter to break away from the committee set up and grab the lion’s share of attempts before the end of the year. The Jets enjoyed a taste of what the fourth-round pick could bring in an expanded role on Sunday. More importantly, Carter worked through a downtrodden offensive line that was missing its anchor (Mekhi Becton) fairly well. As Wilson continues to figure out the NFL game, it’s worth keeping an eye on what the Jets do with Carter, perhaps relying on him as a consistent momentum shifter in the immediate future.